I hadn't realized earrings were a health hazard


I'm surprised - and not very happy - to read that the habitual use of heavy earrings is causing women some serious health problems with their ear-lobes.

They are this season's evening-wear essential - chandelier earrings, such as the enormous emerald pair worn by Angelina Jolie at this year's Oscars. But with such weight hanging off delicate lobes, doctors are reporting an increase in earlobe damage as well as women asking for earlobe reductions.

James McDiarmid, a consultant plastic surgeon based in Plymouth and Cheltenham, says in the past year he has seen a rise of about 20 per cent in patients requesting repair work. 'I see one or two private patients per week requesting split or stretched earlobe repair. Many of them have both ears affected. 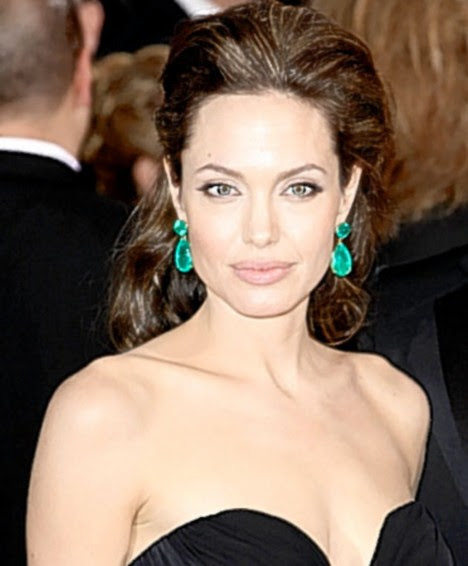 'Heavy earrings are back in fashion. The weight stretches the piercing hole and because of their size they are also at greater risk of getting caught and tearing the ear.'

The earlobe or lobule is on average 2cm long and made of fatty connective tissue. It does not have a biological function. Since the lobe does not contain cartilage, like the rest of the outer ear, it has a large blood supply and - due to its multiple nerve endings - is considered an erogenous zone.

Whether your earlobe is 'free' or 'attached' is an inherited genetic trait. And while creases on the actual lobe are part of the ageing process, they are also indicators of an increased risk of coronary heart disease.

Carolina Lehrian, from Streatham, South London, had reconstruction on her torn right lobe caused by years of wearing what she calls 'Joan Collins-style Dynasty danglies' since the Eighties.

'I was aware that the piercing hole had enlarged, but it wasn't until three years ago that friends started to point out that my earring was about to fall out,' she says.

'I noticed that I had a deep slit about half a centimetre long and it looked horrible,' says Carolina, 45, director of a translationand voice-over company.

'It was only one ear, which I've since learned is very common, as the weight of the earring is exacerbated when you are on the phone, for instance, and don't realise you are pushing it down with the receiver.

'I also used to dry my hair while wearing earrings and the hairbrush would often snag on the right side where there was already damage. That really would hurt and sometimes it would bleed.'

Carolina stopped wearing her chandeliers and replaced them with studs or very lightweight drops. However, the hole had become so enlarged that although a stud would cover it, she had to get special plastic backs because the normal butterfly clips were too small, resulting in the whole earring falling out through the hole.

'Sometimes I even used a large piece of cork as a stopper,' she says.

The plastic surgeon who repaired Carolina's ear, Roberto Viel of the London Centre for Aesthetic Surgery in Harley Street, explains that the soft tissue in the lobe becomes stretched from the weight of the earring until the hole becomes a straight vertical opening.

'Significant weight or trauma can pull through tissue,' he says. 'This can take years or just months, depending on how often such heavy earrings are worn, how soft the tissue is and whether the patient fiddles with their earrings all the time.

Most patients come to see me before the ear has split all the way down, but I have seen those who have left it until the bottom has also split.'

In order to reconstruct the tear, Viel applies local anaesthetic to numb the lobe then cuts a margin of skin on both sides of the split to expose the tissue underneath and remove it, thus creating a raw edge on which to rebuild.

The edges are then brought together and sewn back with minute non-dissolvable stitches that are removed about a week later.

Ears can be repierced eight to ten weeks after the procedure, but care must then be taken to wear lighter earrings or clip-ons and avoid further damage.

A secondary cause of ear disfiguration is ageing. Earlobes grow as we age, and just as breast tissue and the jawline droops over time, so does the tissue in the earlobe, making it appear longer.

The reduction of the lobe is done by marking a curved line at the back of the ear to give it shape, followed by amputation to take away the excess tissue so the ear looks neater and therefore younger. This can be done with a local anaesthetic because the earlobes do not contain cartilage.

Ladies, please forgive me if I seem like a particularly obtuse male . . . but why on earth would you want to wear jewelry that caused such damage to you? There's no way I'd ever want someone I loved to be causing themselves harm like that! Or am I simply ignoring the fact that to some people, fashion is more important than health?

Um, because guys compliment our earrings? Because all the cool kids are wearing them? Because we think about the problems with earrings even less than we wonder what 4" spike heels are doing to us?

The price some women pay for fashion.... I have no idea why the woman was wearing her big danglies while styling her hair - that was asking for it!! While I occasionally enjoy large earrings, there are plenty of stylish ones made of very lightweight materials like aluminum, and there's always clip-ons.

Like many things, less is more. Seriously, I would be more taken with the woman wearing her hair up in a simple manner, with simple stud earrings, minimal make-up, etc, than the woman with too much of everything.

Because the risk / consequence is gradual and easy to ignore when focused on looking pretty right now. Not so different from makeup (I know you've had a post on that, too), or wearing high heels in snowy parking lots.

Then again, this is focusing on the women who do this inadvertently. You'll find that there are plenty of young men and women who stretch their earlobes intentionally. But if you ever see a single earlobe with a vertical scar from piercing to edge, you're likely looking at a mom who discovered the incredibly immediate danger of dangling earlobes: babies put up to a shoulder grabbing them and ripping them out of the ear.

Usually they almost never wear dangling earring again in their life, and only cautiously pick up studs again after the kids are grown out of diapers.

I have to admit, I once experimented with large, heavy earrings.

It was years ago, though - well before they'd started to come back in style, and they weren't really my style, anyways; more the sort of thing my great-grandmother would have worn (she was fond of ornate, heavy earrings).

Fortunately, they were also costume jewelery, and had only cost a couple of dollars - so when, after a few minutes of wearing them, my earlobes started to hurt, I felt no guilt in taking them off, setting them aside...and never picking them up again.

While I'm still fond of ornate, dangly earrings, I tend to prefer ones that aren't heavy. (And my favourite pair prevent me from talking on the cell phone anyways - the shape, combined with the metal used, interferes with the signal.)

I vary my routine with earrings, but the larger ones are for more special occasions, are generally very lightweight and are the last things to go on before I leave the house and the first things to come off when I come back home. Or if I want my ears nibbled. Whichever. Just as with extreme heels, I enjoy the playful possibilities with variations, but one can't expect the body always to bounce back if its not given a break from accessories which push the envelope.

I think Angelina looks lovely here, and on a special occasion, I have no problem with such ostentatious earrings. OTOH, it would look garish at the stop-n-rob, so a sense of occasion is a must when considering such jewelry.