Taking technology to extremes - and extremities!


The BBC reports that a Finnish computer programmer has used a nasty accident to perform an interesting modification upon his very own hardware.

A Finnish computer programmer who lost one of his fingers in a motorcycle accident has made himself a prosthetic replacement with a USB drive attached.

Jerry Jalava uses the 2GB memory stick, accessed by peeling back the "nail", to store photos, movies and programmes.

The finger is not permanently attached to his hand, so it can be easily left plugged into a computer when in use.

On his blog, Jerry provides more details - and his plans for a hardware upgrade.

First of all it is not attached permanently in to my body, it is removable prosthetic which has USB memorystick inside it.

Secondly when I'm using the USB, I just leave my finger inside the slot and pick it up after I'm ready. 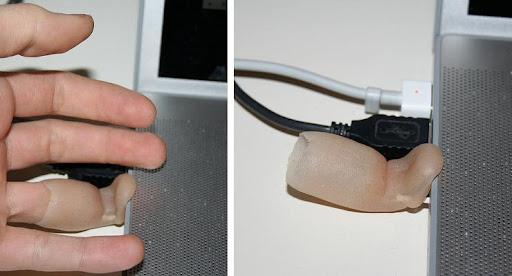 Currently I have Billix , CouchDBX and Ajatus installed inside it.

I'm planning to use the other prosthetic as a shell for the next version, which will have removable fingertip and RFID tag.

Ingenious, certainly . . . but I can't help but wonder what happens to poor innocent visitors who wander into his office while he's out, and see a bodiless finger stuck into his computer's USB port! I don't think that's the sort of 'out-of-body experience' that most people envision!

Well I guess he can't call it a "thumb drive" anymore

Makes you want to cut off a digit.