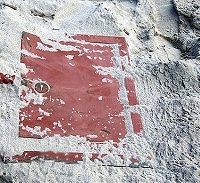 Bungling thieves realised their scam was sunk after they buried their loot on a beach - underneath the high tide mark.

Hapless Lukasz Kaszubski, 20, and pal Patryk Arciszewski, 19, had staggered off with a 32 stone [448 pound] safe after breaking into a seaside guest house in Kolobzreg, Poland.

But after failing to open it they dug a hole on the beach and stashed the safe until they could return with tools to force the locks.

The pair were arrested the next day following a tip off from locals who spotted them frantically trying to haul the safe out of the sea after the tide came in.

"The look on their faces when we turned up was priceless," said police spokesman Andrzej Duda.