Of desks, chairs and health


I've been doing a bit of research into desks, chairs and the like, as I spend many hours seated before my computer. Since my heart attack last October, the health risks of prolonged sitting have been on my mind, and I've been looking for a better way to work. I'm using a (very expensive) ergonomic office chair, but that still isn't enough to prevent circulation problems.

The New York Times had a very interesting article this week on 'standing desks' that can be reconfigured to seated height.

I’ve spent several weeks trying to find the perfect way to work at my computer without a chair. The search was not quixotic; standing up is in vogue. Medical researchers have found that people who stand at work tend to be much healthier than those who sit, and there’s a large online subculture of stand-up fanatics who swear that getting rid of your chair will change your life.

But I wasn’t just looking for better health; standing, I hoped, would also improve how I work.

Several years ago, I read that the novelist Philip Roth writes at a computer propped up on a lectern. I’ve used this technique as an occasional therapy for writer’s block. I’ll set my laptop on the kitchen counter and hover over it as if I were a conductor before an orchestra. This seems to help. Standing up saps some of my extra restless energy, allowing me to focus better on the task at hand.

The kitchen counter, though, wasn’t meant for office work, and after a short while my neck begins to strain from staring down at the screen.

Enter the standing desk. In the last few years, many office supply companies have begun to sell desks that are tall enough to put your computer screen at eye level while you’re standing. But I was wary of furniture that required me to stand all the time; these desks seemed to enforce a rigidity that’s unseemly outside of a Navy brig.

I needed something more flexible. Then I discovered the adjustable-height desk. These so-called “sit/stand” models are equipped with an electric motor that lets them shift from chair height to person height at the push of a button. Unfortunately, they’re regarded as specialty furniture. Sit/stand desks tend to be expensive, hard to find and not very easy to test in person. That’s too bad. I got my hands on an adjustable-height desk a few weeks ago, and I can’t stop raving about it.

I tried the smaller of GeekDesk’s two basic models — a 45-inch-wide desk that sells for $749. (The 79-inch model goes for $799. Shipping to the lower 48 states starts at $110; the desks ship unassembled.) I’ll admit it took a few days to get used to. At first, I couldn’t decide when to stand and when to sit. I also tended to forget that I could switch at all; only at the end of the workday would I remember that my desk was moveable. 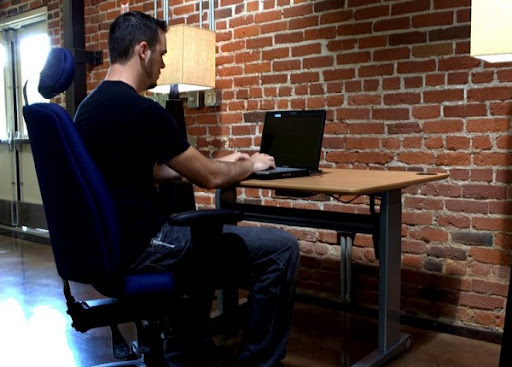 And although shifting between standing and sitting was effortless — flick a switch one way to go up, the other to go down — deciding on the right height for each position took a bit of practice. The trick, I found, was to adjust the desk so that the top of my computer monitor was in line with the top of my head; this allowed me to look straight ahead at my work whether I was sitting or standing. 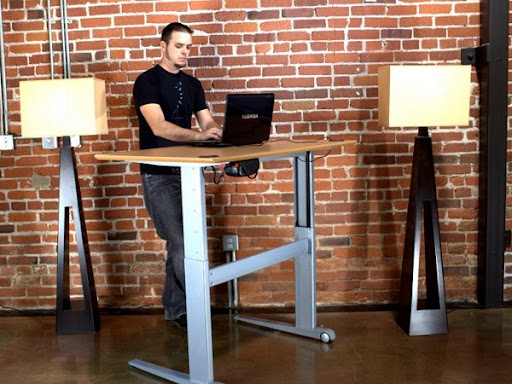 After a few days of warming up, I settled into a pleasant sit/stand routine. Because I found it difficult to drink coffee or eat breakfast at my desk while standing, I began most mornings seated. I’d begin to stand about an hour later. If I had to write an article, I’d remain standing for most of the day. But if I was planning to spend a lot of time on tasks that required less creative focus — surfing the Web, making phone calls, watching online videos — I’d usually switch back to sitting at around lunch time. 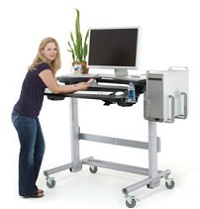 Nichole Stutzman, creative manager for the ergonomic furniture company Anthro, which makes a wide variety of adjustable-height desks, spotted a similar pattern at her office; people tend to stand when they want to get something done.

“We have a lot of designers here, and when they’re trying to draw or do something creative, I start hearing the desks go up,” she said.

I suspect that this is because when you’re standing, you feel a bit unchained from your desk. If I got stuck on a word or sentence as I wrote, I found myself shaking my arms, bouncing on my feet or stepping away from the desk for a bit — things I couldn’t do in a chair. Often, the antsy-ness seemed to relax my mind enough for me to get over my creative hurdle.

There's more at the link. Pictures are courtesy of the GeekDesk and Anthro Web sites (see links in article).

I think one of these desks might offer the solution I've been looking for: but I'd like more information. Do any of my readers have experience with such workstations, or know someone who uses them? If so, how did you (or they) find it? Did it help with overall health concerns? Please leave a comment with your feedback.

I can't comment on the overall health benefits, but I did read an article on weight-loss that showed (understandably) that standing burns a LOT more calories than sitting. Something to think about.

More often than not, in workshops I've used, the workbenches that hold powertools are at standing height, and instead of a normal chair, there is a high stool. This allows you to switch between standing and sitting without changing the desk height. In that context, at least, it's definitely handy to be able to sit or stand. I find I usually sit when I'm doing fine work where I want only my hands to move, and my elbows are often anchored to the table to help provide stability; and I stand when doing work that requires making larger movements with my arms. There's no reason the same idea can't work as well for a computer as it does for a bench grinder.

As I recall, Earnest Hemingway sat down and wrote his prose in longhand, but stood up and typed all of his dialogue. He did this to work with the different thought and written rhythms of the two types of writing, and it's part of what gives his writing its distinctive style. He may have been on to something.... (on a largely unrelated side note, I've always thought that a picture of the Venus de Milo would make a splendid cover for Hemingway's "Farewell to Arms.")

A colleague at a computer company where I worked in the early '90's switched to a standing desk after recovering from a heart attack. His health improved significantly (according to his reports) and he was still standing at his desk when I left the company after a couple of years.

Standing is healthful - as long as you retain your svelte waistline and do not put excess strain on your knees and hips.

However, monitors, keyboards, mice, and KVM switches are cheap while standing desks are expensive.

A click of the switch gives you your choice of operating positions.

Stranger - good point! I reckon that for between $300 and $400, I can have a duplicate monitor, keyboard and mouse, and set them up on a home-built standing-height worktop. That would be half the price of a purpose-built adjustable workstation. I'll have to look into that option.

Donald Rumsfeld was known to use a stand up desk. He was famous for it.
I doubt you will want to stay with it for very long. After all, we all get tired. good luck and keep us posted how it works out.

They make treadmill desks too, though that too is probably not something you'd want to use all day. They also cost a pretty penny--a cheap treadmill and a bit of work will probably do just fine.

I have to admit that if you are playing games on a computer, you might as well be standing.

Well it's not exactly standing but all the built in goodies promote good health and posture.