Don't just "Talk Like A Pirate" - get elected as one!


In a very appropriate (albeit inadvertent) salute to Talk Like A Pirate Day, celebrated every year on September 19th, fifteen members of Germany's Pirate Party were elected to the Berlin state legislature. The Local reports:

The upstart Pirate Party scored a big win in Berlin's state elections on Sunday, gaining 15 seats in the state parliament. As Moises Mendoza found, its young members are both enthusiastic about and dazzled by their success.

Outside the Pirate Party’s Berlin headquarters, frazzled young, new politicians scurried back and forth from reporter to reporter and interview to interview on Monday morning.

Martin Delius, a 27-year-old student, who is about to become one of the party’s 15 representatives in Berlin’s state parliament admitted being overwhelmed by the results.

“We were expecting some success,” he said. “But this was more than we could have dreamed.”

Delius admitted that he and his colleagues were not yet sure how they were going to make a concrete difference in the everyday lives of constituents.

“To be honest, we don’t know how we’ll do this,” he said. “This is something totally new. We just know people believed in our issues. We have to figure out how to solve problems now.”

Their inexperience was clear on Monday as the Pirates’ operations sometimes seemed to be bordering on chaos. Members said they were prepared to work hard, but other than proposing a lower voting age, free public transportation and free wireless internet, they seemed to have few concrete plans for what they wanted to get done.

That makes Berlin one of the leading lights for the nascent international Pirate movement. Formed in Sweden in 2006, it preaches transparency in government, freedom on the internet and privacy for regular people. Its biggest success so far has been getting two members voted into the European Parliament.

Swedish Pirate Party founder Rick Falkvinge told The Local that the Berlin election was “major step upwards” and “a big leap” for the movement. He said he envisioned more electoral victories throughout Europe.

Some German media are sniping at established parties, blaming them for being so unattractive and unresponsive to voter concerns that they've allowed this 'fringe' party to sneak in under the wire. On the other hand, I look at it this way. Given the bland stupidity of most 'orthodox' politicians (something we've seen all too clearly in this country), why not give the 'fringe' a try? They couldn't possibly do worse than 'establishment' politicians, and they might actually do better!

"Fifteen Congressmen on a tea chest,
Yo, ho, ho and a bottle of rum!"

To stop the in-fighting in Congress, they could declare an Arrrrr-mistice . . .

Then, of course, there's the Lolcat version: 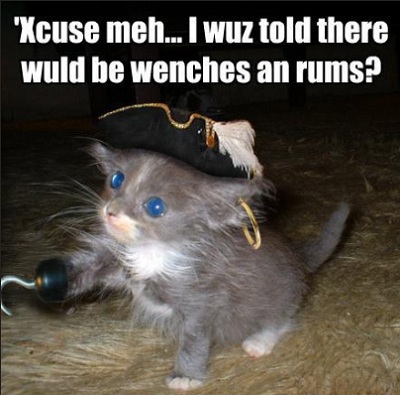 Some politicians would agree with the kitty about that . . .

EDITED TO ADD: I don't know about 'wenches and rums', but reader Al J. sends this song of 'wenches and mead'! It's rather noisy, and not my style of music, but for those who like that sort of thing, here it is.

My ears started bleeding after about ten seconds; not my tankard of ale, thank you.
WV muckeyst The music was the muckeyst I had ever heard.