I've been following the work of some Australian archaeologists with great interest since 2008. They've been using Google Earth to survey large swaths of the Middle East where, for one reason or another (including war, terrorism, internal security concerns and regional tensions), normal aerial photography for archaeological research isn't possible.

The first report to attract my interest emerged in July 2008, when doctoral student David Thomas and some colleagues used Google Earth to examine Afghanistan.

Thomas and three colleagues ... used the Google Earth images of Afghanistan to glean new details from already discovered sites, map known sites that don't have any drawn plans and, most significantly, uncover hundreds of sites that were previously undiscovered. 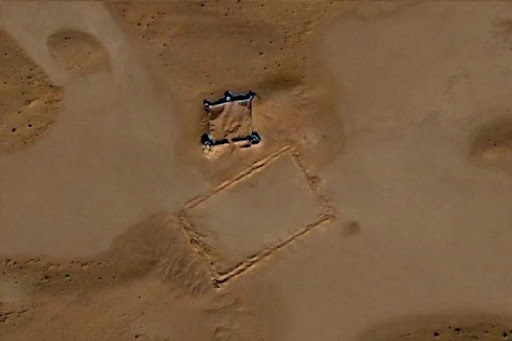 Qal'a-i Hauz, a Ghaznavid fortress and reservoir, in Afghanistan

And the best part is they could do it all from the comfort of their armchairs, without shouldering the costs of travelling to Afghanistan and the threats posed by gangs of Taliban militants.

Before Thomas's project there was only one known site in the Registan desert region of Afghanistan and the last time a researcher visited the area was in the 1970s. Using Google Earth, Thomas's team have managed to catalogue 450 sites in the area, dating back centuries if not millennia.

There's more at the link. Mr. Thomas' paper, titled 'The Archaeological Sites of Afghanistan in Google Earth', may be found here in the form of a Scribd document. It includes several photographs of his discoveries, including the one reproduced above.

In February this year, another academic announced that he'd discovered many new archaeological sites in Saudi Arabia using a similar technique.

Kennedy was able to confirm the legitimacy of two of the finds by asking a friend in Saudi Arabia to drive out to the sites and photograph them. He believes they may be up to 9000 years old. 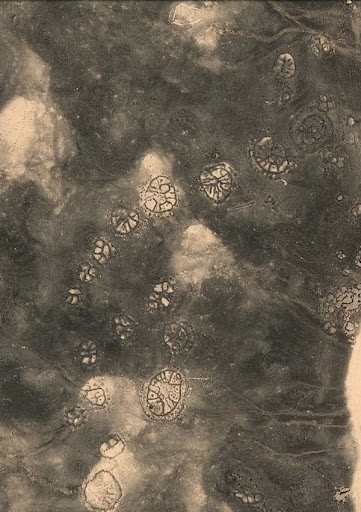 Kennedy told New Scientist that Saudi Arabia was "not the easiest country to break into" and it was difficult to even fly over the nation - but he said Google Earth "can outflank them".

In his paper on the find, published in the Journal of Archaeological Science, Kennedy writes: "It is readily apparent that the use of GE [Google Earth] for the prospection and identification of sites has great potential when dealing with a huge area that is otherwise largely inaccessible on the ground."

However, further ground verification is needed to confirm the significance of the sites.

"Just from Google Earth it's impossible to know whether we have found a Bedouin structure that was made 150 years ago, or 10,000 years ago," Kennedy told New Scientist.

In the journal paper Kennedy said initial investigations revealed most of the discoveries were "pre-Islamic". It is thought that the Islamic regime in Saudi Arabia is hostile to archaeology because it may focus attention on pre-Islamic civilisations there.

Britain's Daily Telegraph newspaper reported that 90 per cent of the archaeological treasures in the holy cities of Mecca and Medina had been destroyed to make way for hotels, apartment blocks and parking facilities. Last year, Saudi clerics reportedly renewed long-standing calls for the demolition of several historic Islamic sites.

(I can understand Professor Kennedy's fear of destruction of ancient sites by militant fundamentalist Wah'habist clerics. Their brand of Islam isn't all that far removed from the Taliban in Afghanistan in some respects - and we all remember what the Taliban did to the Buddhas of Bamiyan in that country!)

Australia has unwittingly become the Google Earth archaeology capital of the world.

After announcing in February that he had unearthed almost 2000 potential archaeological sites in Saudi Arabia from his armchair, Professor David Kennedy, from the University of Western Australia, has now uncovered thousands more prehistoric man-made stone structures across the entire Arabian peninsula, stretching from northern Syria to Yemen.

Among Professor Kennedy's discoveries in the area are domestic dwellings, tens of thousands of stone burial tombs shaped strikingly like pendants and trumpets and 3000 "kites". The kites were named as such due to their shape and were in fact used as animal traps - ranging in diameter from 20 or 30 metres to 10 times that size. 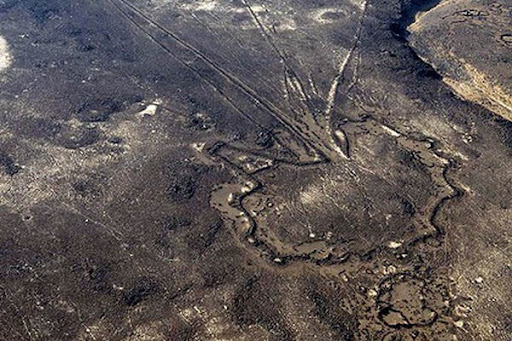 An ancient 'kite' in Jordan

"The tails are guide walls, animals would be enticed into the open mouth of the guide walls and they'd be slowly funnelled down until they found themselves in a circular enclosure of some kind, where they would be killed," said Professor Kennedy.

These stone structures - which were about a metre high at the time but are now just 50 or 60 centimetres tall - were first discovered by British Royal Air Force pilots in the 1920s but the finds were very partial and fragmented. As at 1995 there were only about 507 known "kites" in the area but Professor Kennedy has now increased this six-fold.

"What has changed now - thanks to a programme of aerial archaeology in Jordan and the growing coverage of high-resolution imagery on Google Earth and Bing, is the ability to identify these structures over immense areas of Arabia, draw them, map them and begin the task of interpretation on which specialists in the region and period can base a multi-disciplinary research project," he said.

With Google Earth, Professor Kennedy and other archaeologists are able to build a much more complete picture and discover ancient structures in areas where they would never be permitted - or physically able - to access on the ground or by using aerial photography.

Professor Kennedy is the current director of the Aerial Photographic Archive for Archaeology in the Middle East (APAAME). Its Web site contains many photographs and details of discoveries made using both Google Earth and aerial photography. Many of its images have been copied to a Flickr photostream for greater ease of access. Another good source for information about 'aerial archaeology' in Saudi Arabia is this article by Professor Kennedy, including many more photographs. All three links are highly recommended reading for those interested in ancient history and archaeology.

This is fascinating. And who knows what else we'll find, now that we're looking?

Could we scan America on "Google earth"?

I really admire people who try to conduct archaeological research in and of places like Saudi, Afghanistan, Pakistan and other states where structures and documents that record the history before 632 AD/CE are considered at best pointless and at worst something to be eliminated. About 15 years ago there was a debate in Pakistan over what to do with Mohenjo Daro in the Indus Valley. Some islamist leaders wanted it leveled, others said the archaeologists could do reconstruction and preservation but there should be signs with verses from the Quran about the fate of the unbelievers.

I realize that there are other places where certain groups do not want their version of history disturbed by archaeologists, but at the moment the Islamists seem to be the most insistent.
LittleRed1