I'd never heard of 'love locks' until I found this picture in the Telegraph. 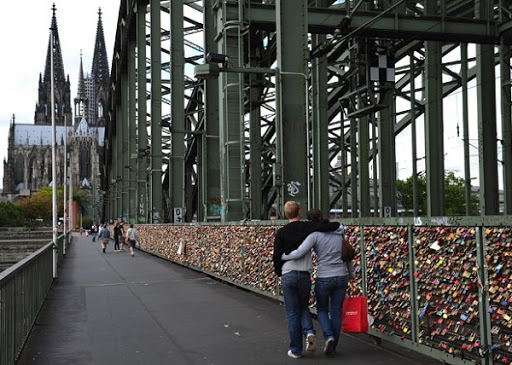 A young couple walk past thousands of so-called "love locks," or "love padlocks," that hang from a fence across the Hohenzollernbruecke bridge in Cologne, Germany. Love locks are a growing phenomenon in cities across Europe and are left by couples as a symbol of their undying love for one another.

'Love locks'? I've heard of chastity belts being locked, but that's the only connection I could think of. Intrigued, I looked them up on Wikipedia, which had this to say:

Love padlocks have existed for quite some time, though there are no certain sources for their origin. In Europe, love padlocks started appearing in the early 2000s. The reasons love padlocks started to appear vary between locations, and in many instances are unsourced. However, in Rome, the ritual of affixing love padlocks to the bridge Ponte Milvio can be attributed to the book I Want You by Italian author Federico Moccia, who later made it into the film-adaptation Ho voglia di te.

Similarly, an attribution for the bridge Most Ljubavi (lit. the Bridge of Love—now named after the love padlocks) in Serbia exists, where they can be traced to even before World War I. A local schoolmistress named Nada, who was from Vrnjačka Banja, fell in love with a Serbian officer named Relja. After they committed to each other Relja went to war in Greece where he fell in love with a local woman from Corfu. As a consequence, Relja and Nada broke up their engagement. Nada never recovered from that devastating blow, and after some time she died as a result of her unfortunate love. As young girls from Vrnjačka Banja wanted to protect their own loves, they started writing down their names, together with the names of their loved ones, on padlocks and affixing them to the railings of the bridge where Nada and Relja used to meet. 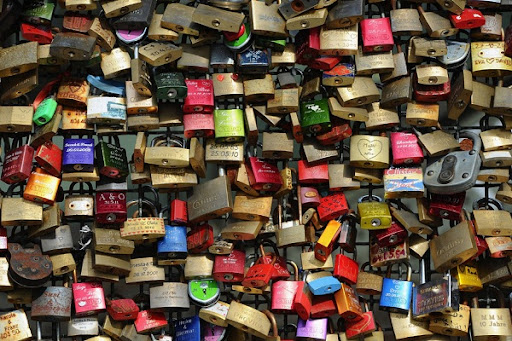 Frankly, the only beneficiaries of 'love locks' I can think of would be the manufacturers and sellers of padlocks! Sure enough, a search reveals a number of companies who are specializing in this market (doubtless very profitably). One of them says on its Web site:

Lovelocks® commemorative custom engraved padlocks are a perfect way to show somebody just what they mean to you. Our artfully designed love padlocks are the perfect unique gift for any occasion. It’s the perfect way of letting those significant to you understand just how special they really are. Following an ancient custom, you can “lock your love” to that person or those people important in your life. Engraving your own personal message on a Lovelocks® padlock is the ultimate way of saying “I love you” and solidifying those special relationships in your life.

I could have sworn that's what you signified by giving someone a ring! I shudder to think what Miss D. would have done to me if I'd presented her with an engagement or wedding padlock instead! And would unlocking one be a sign of impending divorce or separation? What about if you can't find the key? Would bolt-cutters destroy your relationship as well as the lock?

Yes, my girlfriend and I also left a lock here. Don't know whether the lock vendor gets that rich from our 20 bucks.

We found it was funny and still think it is

The next wacko phenomenon will be a Trojan project called "The condom wall".

The first will be built through the center of Berlin.

In Paris they seem to use brass locks with polished metal shanks, possibly because they look better on the bridge when the morning and evening sun hits them. Or perhaps the historic preservation people passed a regulation . . .

Frankly, the only beneficiaries of 'love locks' I can think of would be the manufacturers and sellers of padlocks!

Because buying a diamond is a practical affair filled with usefulness and in no way most directly benefiting the seller of same, and totally free of any possibility of morally tainted goods produced off the blood of oppression.

I'd rather give $20 to Masterlock or Yale than $2000 to Zales, Kay, or De Beers. At a bare minimum, if I change my mind I have a functional padlock instead of a useless overhyped bit of carbon and electrical conductor.

But the interesting question comes regarding Toejam's Berlin Condom Wall. What's the chemical equivalent for couples who so choose? Will a crop duster come through periodically loaded with the appropriate juice to render the thin latex line irrelevant?

A quick pass with a few home-made picks and you could score some nice old locks I would imagine judging from that picture!

Saw this in Japan maybe 15 years ago.

Then there was Laura Lee's soul classic "Wedlock Is A Padlock."

And the house is low on chocolate. Danger, Will Robinson!