I'm writing these words from a hotel in Arkansas, between Little Rock and Fort Smith, where Miss D. and I are spending the night on our way to a blog gathering in North Texas.  We'll get there tomorrow (Friday).

On the way, I made a fuel stop at a small town where the gas station had a convenience store in one half of its building, and a liquor store in the other half.  Idly glancing into the liquor store as I walked past, my eye fell on a display of various and sundry varieties - sold in Mason jars, as is traditional - of Ole Smoky commercially-distilled moonshine.  I'd heard about their products before, but hadn't come across any before today.  Being familiar with South African witblits (meaning literally 'white lightning') and mampoer (a sort of home-distilled brandy made from various kinds of fruit), I'm no stranger to the moonshine culture.  Intrigued, I stepped inside to take a closer look. 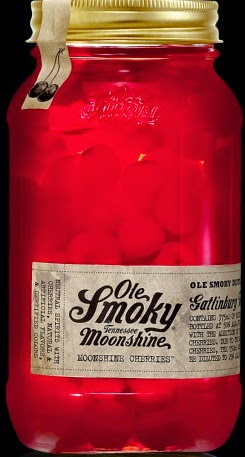 The store offered several different varieties;  blueberry, 'straight', and so on.  However, what really caught my eye were the moonshine cherries;  maraschino cherries preserved in high-proof moonshine.  A fellow blogger has spoken about his growing appreciation of them, so I figured the least I could do was back up his research with my own.  Besides, it occured to me that my fellow bloggers and friends at this weekend's gathering might like to contribute to the research (all in the name of science, you understand).  To cut a long story short, I emerged from the store bearing a couple of jars of moonshine cherries.

Miss D. and I enjoyed a late supper after a long drive, and decided that rather than push on to where we'd planned to stop overnight, we were tired enough to just stay where we were.  An inquiry at the nearest motel yielded an affordable and reasonably comfortable room, so we turned in early.  My fused spine always wakes me after only a few hours by locking up in pain, so I was awake shortly after midnight, and spent a bit of time working on my latest book.  However, I was vaguely thirsty, even after a cup of tea, and wanted something to help me sleep again in due course.  My eyes fell on the jars of moonshine cherries . . .

These things are like crack in a jar!  They're delicious!  I'm on my second helping of them already, and feeling little pain by now - they're more effective than many pain pills I've tried (and I've tried most of them in the eleven-odd years since my disabling injury).  After I've put up this blog post, I'll try to get a bit more sleep before continuing our journey in the morning, and I reckon I won't have any trouble finding the Land of Nod with their help.  The only problem is going to be to resist the temptation to have some for (or with) breakfast.  Even a few of them will probably be enough to put me over the drink-and-drive alcohol limit!

The only caution I'll give you is to eat them slowly, and sip rather than gulp the liqueur they come in.  It's strong stuff, and will have you coughing and spluttering if you rush it.  (How do I know this?  Trust me.  I know this.)  Other than that, these moonshine cherries get an emphatic Bayou Renaissance seal of approval.  I'm sure my fellow bloggers will add their own to mine later this weekend.  I can hardly wait to try them over ice-cream.

(In case you were wondering, no, I've not been asked to mention them and I get no sponsorship or commission from the manufacturer for recommending them.  These are just my enthusiastic tastebuds talking!  A tip o' the hat to Glenn B. for recommending them on his blog.)

I know where you'll be stopping on your way home!

A little to your East, Popcorn Sutton was the local legend for brewing great likker.

May I suggest that you enjoy them shortcake style? Make with sugar cookies and ice cream. I like the large sugar cookies, broken into moderate pieces, so that I can get ice cream, cookie and cherry in each bite. The crunch of the cookies adds to the dish.

I am happy you are enjoying them. They certainly are hard to resist once you start on them. I even found a way to improve them. Drink all the moonshine in the jar and eat only half the cherries. Then refill the jar with more moonshine, their 100 proof stuff or stronger (although I have not found the 126 proof stuff yet). Talk a bout an extra kick in the head!

All the best,
Glenn B

The strawberry version is also very good. Then there is the quartered lemon. But I had the untaxed version...

It is never safe to leave these in our house. I could sit down and eat a bowl of them like popcorn. And then take a very long, very deep nap.