Mad Mike tells us how it's done


Friend, fellow author and fellow blogger Michael Z. Williamson has a new book out.  As a former African boy, love that cover! 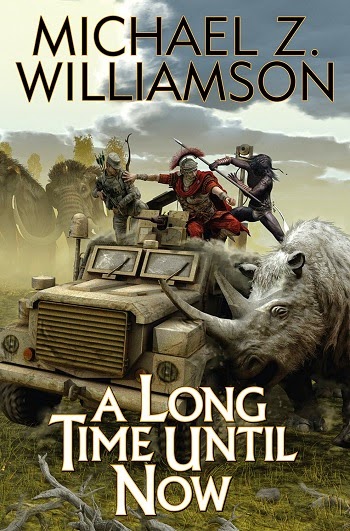 I recommend it, as I do all Mike's books:  but one of the most interesting aspects of his latest is an article he wrote for Baen Books, his publisher, about the research that went into it.  Here's an excerpt.

While the market for action adventure is bigger than for hard SF, I've always been a fan of the science-oriented story. The limitations of reality, combined with speculations within them, is a rewarding challenge.

Of course, I didn't realize when I started writing A Long Time Until Now that there hasn't been much research about Paleolithic Central Asia. I also had an almost impossible time finding knowledgeable people to talk to. In fact, even with introductions from friends in other sciences, I didn't hear back at all from most of the scholars I was referred to.

I sought professional papers on the subject. They're sparse. Still, I read what there was, and quite a bit on other parts of Eurasia.

I may have read most of the scholarly papers on that location and era, which tells you how few there are. Other parts of the world have been studied extensively. Large chunks of Asia are still wilderness, as far as prehistoric study goes.

So then I had to fake it, which frustrated and concerned me. This is supposed to be hard science fiction, not fantasy. Then I realized that if we don't know what happened at given times and places, I can't be expected to be exact. So I did the best I could based on the nearest cultures and environments to that timeframe and location.

Next, I started experimenting. I learned or refreshed quite a few skills while writing this. I made fire by friction with a firebow and fire plow. I tried several types of bugs, and prefer them cooked. Emily Baehr brought a bag of weeds (that's plural, okay?) and showed me how to find an entire salad's worth of greens in temperate biomes, even in residential lawns. I used primitive weapons to bag a few targets. I use bows regularly, and have thrown spears. I tried atl-atls and slings. I knapped some bottle glass.

Then I developed several recipes that will appear in my next collection of stories and articles. How do you cook a tasty meal with minimal spices and no cooking utensils? Well, it turns out you can create quite a few spices and seasonings from plants in the carrot family.

There are a lot of edible plants and quite a few spices in the Apiaceae family. In fact, almost all edible plants come from about six families, and do so in the last 7000 years or so. Before that, there's some evidence of rice and wheat, and occasional possible evidence of fruit domestication (versus actual agriculture).

However, it's obvious from the evidence that vegetarianism is just a modern ideal. No matter how many believers bleat about it being "natural," it not only wasn't natural then, it was a complete myth. There just aren't plants in the temperate or boreal latitudes that you can gather for enough protein, fat and calories to stay alive. Even if you could, you won't find them in December. This is a world nothing like our own. No domesticated grains, no herded animals. Even modern "wild" berries are usually contaminated, and sweeter, because of cross-pollination with domestic breeds. I've had vegetarians insist we were mostly vegetarian at the time, but they're unable to name the plant species we allegedly derived our calories from, especially fat. I'll save you time: There are almost none. Gathering non-fruit comestibles is a net calorie loss and a waste of time.

Most of the Paleo diet people won't be happy either. There was a lot of meat, but most of it was stringy and lean. Humans need fat for brain development and to maintain the skin, among other organs. When you can't get gorged, winter-ready animals with a layer of fat to eat, you wind up eating brains, livers and kidneys. They also provide salt, minerals and flavor. Hunter gatherers cherish the organ meats for nutrition. You'll want a lot of fatty fish, too.

After a week of this diet, I was ready to kill someone for some french fries or a peanut butter sandwich.


There's much more at the link.  Recommended reading for all those interested in the craft, art and science of writing.

Kudos to Mike for taking his writing seriously enough to physically practice and perform the activities he was describing.  Not many writers take things to such lengths of realism.

One of the things people didn't consider with the Comanche Indians on the High Plains was how vulnerable they were to drought - in the Rio Grande river valley. because the High Plains does not support many carb-producing plants (cattails, Arrowhead, some amaranths, and Jerusalem artichoke are the biggies, and those are strongly limited by the semi-arid environment). So if the Pueblo people had no surplus maize to trade, it was a disaster for the Comanche.

*snort* I've known for a while the whole 'vegetarianism is natural' thing was a crock.

Jane Goodall's work in researching our primate kin can be very eye-opening. Chimpanzees in particular will happily eat meat, whenever and wherever they get it. Bugs, smaller mammals, you name it. And other members of the troop will beg lucky chimps for a share if they see they've got some.