One of the best military autobiographies 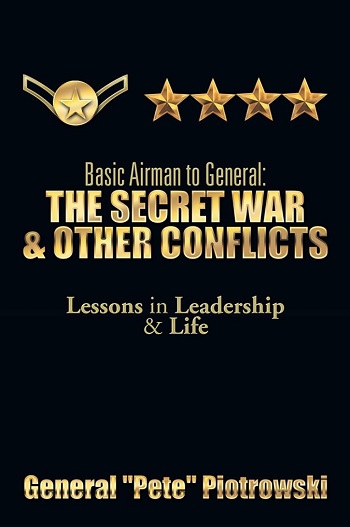 As the title suggests, General Piotrowski rose from the lowest enlisted rank to that of four-star general - E-1 to O-10.  You literally can't do better than that, career-wise, in the US military, and haven't been able to do so since World War II, when the last five-star General and Flag officers were created.  His description of the different units in which he served, and their missions, is very well written.  In particular, he was a founding member of the 'Air Commandos', seeing combat in Vietnam long before the major US buildup there.  Here's an amusing snippet from 1962:

There was a stipulation from the US government that we had to fly with a Vietnamese person in our aircraft so that if we were shot down, the higher ups in Washington could claim that we were just training Vietnamese aircrews and not involved in combat operations.

The solution to this political directive was for the VNAF to select some very young enlisted personnel and assign them to fly on AT-28, B-26, and C-47 missions. There was no training involved, except the signal for bailout and how to safely jump from the aircraft and pull the D ring to deploy the parachute. AT-28 pilots asked the interpreter to tell these reluctant passengers, “If the cockpit canopy opens in flight, bail out!” Pilots or aircrews scheduled for alert duty were introduced to their “trainees” immediately after breakfast. After saying hello and remembering what they looked like, we went to our respective alert tents, one for American aircrews, the second for the Vietnamese. When the alert horn sounded, we were both supposed to run to our aircraft. However, after a few flights in the backseat of an AT-28 and being hurled at the ground, the trainees ran the other way and had to be run down, tackled, and led reluctantly to the airplane.

I can't say I blame the Vietnamese trainees at all!

Gen. Piotrowski concludes each chapter with a series of 'lessons learned';  what each experience and rank and posting taught him about life, a military career, and being a better leader.  He tells his story well, keeping the reader interested, and revealing an insider's perspective that one doesn't often find in such memoirs.  I found his exposition of the responsibilities of general officer rank to be of particular value:  personnel selection, management approaches, political and diplomatic considerations, the problems of ego and empire-building, and so on.

I'm certainly going to use what I've learned from Gen. Piotrowski in my military science fiction writing.  It'll add a new and valuable perspective.  I highly recommend his book to all aviation and military history buffs.

He's Old Air Force. Those were the days when men were men, instead of uniformed metrosexuals. That was the USAF my father served in.

I picked up one on Gen. MacArthur the other day for a buck. So far, American Caesar holds my interest easily.

I'm a quarter of the way through, and he's in his 60's already. WWII and Korea are going to be very involved.

Fascinating book so far, but he made a number of mistakes that could have been prevented by some fact-checking. For example, calling the Bf-109 an Me-109, and claiming Joe Kennedy, Jr. died flying a B-26 Marauder, when he was actually a Navy Lt killed in Operation Anvil flying a PB4Y-1 former B-24J when it exploded before he could bail out. But his lessons at the end of each chapter are really good.