The National Oceanic and Atmospheric Administration (NOAA) has announced that a previously unidentified shipwreck on the seabed near the Farallon Islands, off California, has been confirmed to be that of the USS Conestoga, a US Navy oceangoing tug that vanished in 1921. 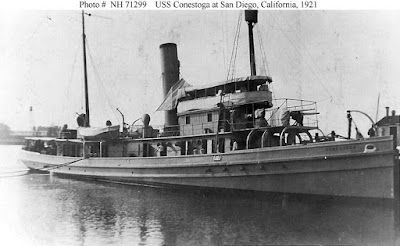 
Conestoga was the last US Navy surface ship to be lost during peacetime.  The wreck was found in 2009 during a sonar survey of the area, and identified during an exploratory mission in 2014. 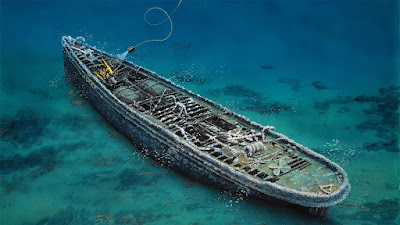 
The NOAA has discussed the discovery in a press release, including several downloadable images.

I think we should also remember the 56 crew members of the tug, all of whom vanished with her. 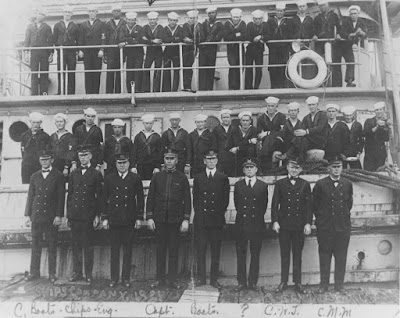 Their loved ones never knew what had happened to them.  May they and their families rest in peace.

USS Scorpion SSN589 and USS Thresher SSN593 were both lost in peacetime.

Are submarines perhaps not technically ships?

@Anonymous at 11:44 AM: Good point. The Navy press release didn't specify 'surface ship' specifically, but I'm sure that's what it implied. I've therefore amended my post to read 'surface ship', just to clear up any confusion. Thanks for pointing it out.

I've seen so many headlines about this that say "mystery solved", and the mystery apparently only includes where it was lost, rather than why. Is there any indication from either the condition of the ship or the weather records for the position of the ship at the time she would have arrived there that tell us something about why it sank?

May they and their families rest in peace.

No man has ever served at sea without knowing that each day could be his last and no one would even know where at sea he lay. No man served a day at sea without the knowledge that the ship he sailed might not survive to sail another day. But no man at sea let these fears overcome him. He knew his shipmates were beside him to help stand the watch, to plot the course, and to be the family and support we all need to meet and survive another day. They were his shipmates.

Does the Cold War count as "peacetime"?