We've spoken recently of the reintroduction of the OV-10 Bronco in the Middle East on a trial basis, and the use of Embraer's EMB-314 Super Tucano light strike aircraft by Afghanistan and other countries for counter-insurgency warfare.  Now it seems that Textron has its eyes on the same market (amongst others) for its Scorpion light jet (shown below), which we first met in these pages in 2013.  See the earlier article for a full description of its features. 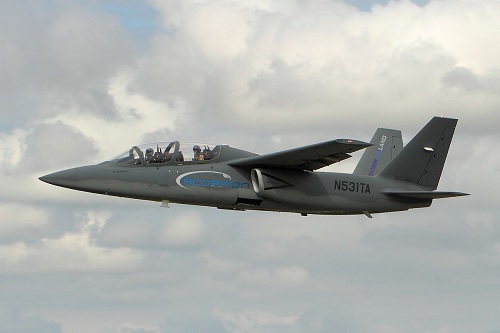 Textron is mounting a big push to sell the aircraft in the Third World, and is currently exhibiting it at the FIDAE 2016 exhibition in Chile.  Janes reports:

First revealed in September 2013, the Scorpion has been developed to suit mission sets including counterinsurgency (COIN), border patrol, maritime surveillance, counter-narcotics, and air defence, in a package set to cost no more than USD20 million to procure and USD3,000 per hour to operate.

Textron AirLand has built the platform around a 2.3 cubic meter [about 81 cubic feet] payload bay in the centre of its fuselage that can accept a variety of sensors and weapons systems, depending on the mission. The Scorpion also has six underwing hardpoints - three on each side - to carry additional sensors, fuel, or weapons such as the Textron G-CLAW and Textron/Thales Fury guided glide munitions.

For cash-strapped Latin America, the Scorpion is a particularly attractive option, given that it can perform the vast majority of tasks that regional air arms usually demand on their combat fleets, but at a fraction of the procurement, operating, and sustainment costs of more advanced types.

That's an intriguing thought, particularly when compared to the turboprop OV-10 or EMB-314.  The latter costs about $10 million a copy, while an upgraded, modernized OV-10 would probably cost twice that - or about as much as the Scorpion.  The turboprop planes would be slower, but could loiter for longer due to lower fuel consumption.  On the other hand, the jet could get to a trouble spot faster, and probably carry more (and more effective) sensors and weapons than the turboprops (at least in their present configuration).  There are trade-offs either way, of course.

I'm sure the Scorpion could handle maritime surveillance easily enough, as long as it wasn't a long-range multi-hour patrol, but could it carry weapons suited to maritime interdiction?  I suppose short-range missiles like Hellfire or the South African Mokopa would be feasible.  As for submarines, it certainly wouldn't be able to carry sensors to detect them underwater, but it might be able to drop small short-range torpedoes like the European MU90 or the US Mark 54.  If it patrols over or near an array of underwater sensors (something like the US SOSUS network, but optimized for shallow-water littoral use, perhaps deployed to monitor the approaches to a major port), it could drop such torpedoes on a target identified by the array.  That opens up some interesting tactical options.

Here's a video clip of the Scorpion at the British RIAT air show last year, including shots of its maritime surveillance tests.

I think Textron may be onto something good here.  Let's see if they can find a launch customer.  I can think of a couple of dozen air forces that would be logical targets for their sales efforts.  I might pick up the phone and talk to a couple of former colleagues in South Africa, while I'm at it . . .

If you could mount Sidewinders on it, it might even be a worthy air defense fighter for those not expecting having to repel advanced fighters. Heck, for sniffing around an errant Cessna, it sure makes more sense to use one of these than it does to pay for an F-22 to do it (granted, the F-22 is probably chalking it up to training, but still, those costs add up).

Actually, high performance jets like the F-15, F-16, etc have a lot of trouble sniffing around a Cessna.

I'm aware of people who have participated in exercises with the US Air Force to do exactly this, and the minimum speed of the jets makes it very hard to interact with the Cessnas. They could be shot down fairly easily, but looking them over, communicating with the pilot (assuming they aren't talking on the radio), etc is surprisingly hard to do.

I think one of the big advantages to aircraft like the Scorpion over the OV-10 and similar prop aircraft is that they can keep up with (or pursue) jet aircraft, which means that they could be used for air interdiction as well as ground attack, reconnaissance, and maritime patrol.
As RP above brought up, I'm sure they have thought about mounting sidewinders or other IR missiles on it.
An advantage of this is that one airframe could do most missions requiring s small aircraft, and the country could either dispense with more complex systems or maintain only a few of them for the most demanding jobs.

Great article. I think the main issue with the "Jack of all trades" aircraft is pilot work/crew work load and capabilities of mission complexity. COIN is not Air Defense. The Scorpion to me seems like a great bridge from permissive COIN to Air Defense but not to the Viper level. A 747 in full grunt is going to outrun the Scorpion. As far as the COIN I think you would enjoy looking at the www.iomax.net/archangel. Beats the Super T, Wolverine, and Scorpion hands down based on cost and capability. Plus it is the only aircraft other than the Super T with actual combat kinetics.

I'm not versed in military aircraft. What would the Scorpion be on par with?

@Anonymous at 12:59 AM: I'm not sure the Scorpion has an exact parallel. It was privately developed (i.e. not to a military specification): Textron appears to have tried to figure out what most third world air forces really need, and then built their prototype to try to sell it to them. The old way was that most air forces had to buy what other, larger air forces had ordered, whether it suited their needs or not. That's how so many African and Asian air forces ended up with high-performance fighter aircraft they couldn't maintain, and crashed them by the score.

I suppose the Scorpion is a jet-powered analog for the OV-10 Bronco or the EMB-314 Super Tucano, as discussed in my article. It can also be compared to a lightweight A-10, able to carry less than half as much ordnance and less rugged, but being smaller, simpler to fly and easier to maintain. It probably also has echoes of the Aermacchi MB-326, a 1960's trainer that was developed into the G and K models (twin and single-seat respectively) with a reasonably effective strike capability.

I think Textron's biggest marketing challenge will be to convince Air Force senior officers that they really need - and can use - the lower-cost, lower-performance but much more affordable Scorpion instead of the higher-performance, more expensive 'toys' that they're used to playing with. There's also the factor that many such air forces have a mish-mash of aircraft, a few examples of several types. That's very inefficient in terms of maintenance, operating costs, etc. I think the Scorpion can replace quite a few older, less economical aircraft and be easier for a less skilled workforce to maintain. If those in charge are prepared to be reasonable in economic terms, that's a big selling point. In terms of efficiency of operations, if I were in charge of a third-world air force I'd much rather have two or three squadrons of Scorpions than a single squadron of MiGs; but that's just me.

If this plane can carry a CBU-105 its anti-ship ability increases exponentially.
I know that the sensor fuzed skeets are small, but against thin skinned ships there effect should be enough to remove it from further use until repaired.
Not many second or third world ships are able to withstand the damage that these CBU's can inflict.
And the CBU is also made by Textron.
Now if there was a way to attach a Extended Range Kit to the CBU, that would make it even more effective.
Think of a weapon release from nearly 100 km away.

re: similar profile aircraft, Cessna's own A-37 Dragonfly seems like a good candidate for replacement with this, for the couple of air-arms still operating that airframe. It's also got some similarities in terms of mission design with the one-off Scaled Composites ARES prototype from the '90s.

Here's hoping it doesn't go the way of the F-20 and the ARES, killed by lack of interest from U.S. buyers, making it uninteresting to countries that could benefit from its use.

Aero has also produced an update of the L-39 for light CAS purposes. The Scorpion and Updated L-39 (can't recall the company designation) are close to one another in capability.

The A-37, produced from Cessna's T-37 "Tweety Bird" may not have the load capability of the Scorpion. The engine, at a minimum, would have to be replaced with high bypass turbofans to get fuel consumption down.