Among the books I'm reading at the moment is 'Beans, Bullets and Black Oil', a history of US Navy logistics operations in the Pacific during World War II. 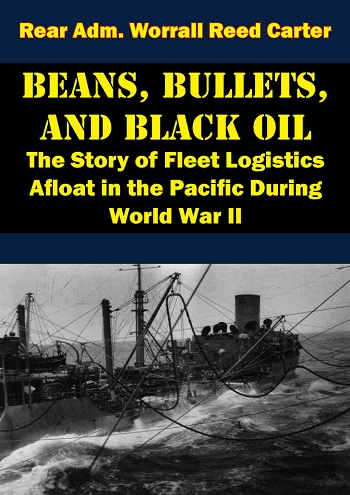 As a student of military history, logistics has long been of interest to me.  It's an old but true saying that 'Amateurs study tactics, professionals study logistics'.  (There are some great quotes about logistics from military leaders [link is to an Adobe Acrobat document in .PDF format] at the Air University Web site.)  I'm therefore enjoying the book very much, and learning a lot about what went on behind the scenes during the Pacific war.  (As Fleet Admiral Ernest J. King allegedly put it, "I don't know what the hell this ‘logistics’ is that Marshall is always talking about, but I want some of it.")

One of the activities involved in fleet support is the repair of battle damage to ships.  In the first couple of years of the Pacific war, before resources had been built up and bases established, sometimes ships were lost simply because there weren't enough support vessels to tow them to safety, plug holes or shore up damaged bulkheads.  Those that could be patched up often had to be content with makeshift work using whatever materials were available.  One such ship was the heavy cruiser USS Minneapolis, severely damaged during the Battle of Tassafaronga in 1942.  She was struck by two torpedoes, one blowing off her bows and the other severely damaging a fireroom.  Details of her battle damage may be viewed here.

Here's how Minneapolis' bows looked before repairs were attempted.  (Click each image for a larger view.) 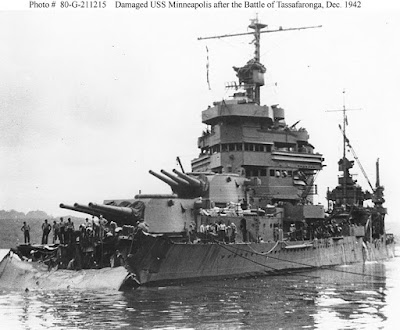 Makeshift repairs were made at Tulagi by her crew, with the help of some Seabees from a shore base. In the process, an explosion caused by a welding torch caused her bow to sink another seven feet, which necessitated even more repairs before she could proceed to a naval base for proper attention. Here's how her bow looked after that explosion. Note the size and strength of her internal structures; they're all that kept the ship afloat after the torpedo hit. After cutting away the damaged steel, divers riveted and welded plates over the openings below the waterline.  A temporary bulkhead of coconut palm logs was constructed above the waterline.  More logs shored up the welded plates below.  These makeshift repairs enabled the ship to limp slowly to the US forward base at Espiritu Santo. 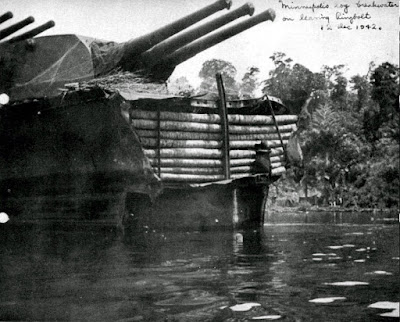 At Espiritu Santo a temporary, short and very blunt steel bow was constructed to cover the opening, allowing the ship to proceed slowly to Pearl Harbor in Hawaii. There, construction had already begun on a new bow for the cruiser, which would be almost ready by the time she arrived. 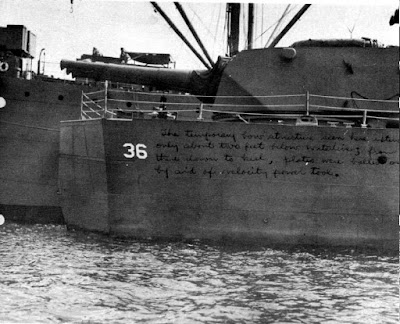 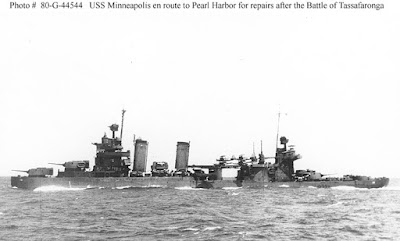 At Pearl Harbor the new bow was fitted, whereupon Minneapolis left for San Francisco for a major overhaul and upgrade at the Mare Island Naval Shipyard. She would not return to action until late 1943. 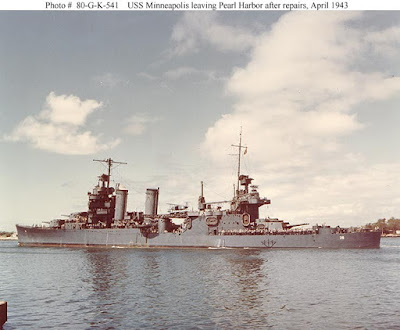 Saving Minneapolis and getting her fighting fit once more is a remarkable story of determination and hard work in the forward areas, with very little support or materials.  Later in the war, dedicated engineering, depot and repair vessels were on standby in forward anchorages to make such repairs much faster and easier.  We're accustomed to thinking of logistics in terms of the supply of oil, food, ammunition and other necessities of war, but repairing battle damage and keeping ships in the fight is just as important a support function.

I recommend RAdm. Carter's book to all students of military and naval history.  If you'd like to know more about logistics in the Pacific war, here's a very good overview of the subject covering all the combatants.  Britain's Royal Navy had to deal with the same challenges;  how they did so is described in this forum thread, while John Winton's excellent book 'The Forgotten Fleet' (which I have in my library) also has a lot of information.

They tell a story about one Colonel during Desert Storm, who used aviation assets to drop fuel, ammo, and food in advance of friendly units so that they wouldn't have to "turn around" to resupply.

Dangerous work for the aviators, who were often working ahead of advancing troops. Go see the webpage on MAJ Marie Rossi, one of those aviators.
http://www.njrunforthefallen.org/maj-marie-t-rossi.html

I couldn't help think of the more famous battle damage turnaround of USS Yorktown CV-5 after the Battle of the Coral Sea.

I'm glad to see that this other look at Navy logistics is back in print:
http://www.amazon.com/Mister-Roberts-Novel-Classics-Literature/dp/1591143659

The USS Yorktown's return to service is a story of incredible dedication by all concerned, and rightly so.

During WWII, Australia's ability to do similar was a guaranteed impossibility for the most shameful and damming of reasons.


Between 1939 and 1945, there was a 'secret war' waged by a number of key Australian trade unions against their own society and against the men and women of their own country's fighting forces at the time of its greatest peril.
Australian warships sailed to and from combat zones without ammunition, and at different times, the entire force of cruisers was targeted by strikes, go-slows and sabotage.

Planned rescue missions for Australian POWs were abandoned because of wharf strikes in Brisbane that left them without heavy weapons.

Officers had to restrain Australian and American troops who had sworn to kill striking trade unionists.

The above words barely scratch the ugly surface of what Australian Trade Unions did, in order to sabotage or destroy Allied efforts to defeat the enemy.

Their sabotage most certainly cost the lives of Australian and American servicemen, yet nothing was able to be done by the Government of the day to stop these acts.

Read it, if you can, without shaking your head is disbelief!.

Here's a hidden gem from your link "this forum thread":

It was, however, somewhat of a surprise that, in an area of extremely heavy rainfall, our first really major difficulty was lack of fresh water. H.M. ships are capable of self-maintenance in that respect as long as they have fuel, and as this was abundant no problem arose in their case. But the merchant vessels forming the Fleet Train were in a very different state, and many of them having no distilling plant needed water at frequent intervals ...and we eagerly awaited the first distilling ship.

She arrived during the second series of operations, but our hopes were dimmed when it was found that, with the high sea-water temperature and some recurring defects in the plant, she could only supply a very small proportion of our needs. She used coal at an alarming rate when distilling (being the only coal burner in the Fleet Train), so our only collier was berthed alongside her, and a small party of sailors was employed fairly continuously on transferring coal from one to the other. But the collier (oil-fired) used a prodigious amount of fresh water as her boiler leaked badly, so the result was that these two ships spent most of their time furiously maintaining each other. The incident was not amusing at the time.

The Logistician
Logisticians are a sad and embittered race of men who are very much in demand in war, and who sink resentfully into obscurity in peace. They deal only in facts, but must work for men who merchant in theories. They emerge during war because war is very much a fact. They disappear in peace because peace is mostly theory. The people who merchant in theories, and who employ logisticians in war and ignore them in peace, are admirals.
Admirals are a happy blessed race who radiate confidence and power. They feed only on ambrosia and drink only nectar. In peace, they stride confidently and can invade a world simply by sweeping their hands grandly over a chart, point their fingers decisively up strategic chokepoints, and blocking defiles and obstacles with the sides of their hands. In war, they must stride more slowly because each admiral has a logistician riding on his back and he knows that, at any moment, the logistician may lean forward and whisper: "No, you can't do that." Admirals fear logisticians in war and, in peace, admirals try to forget logisticians.
Romping along beside admirals are strategists and tacticians. Logisticians despise strategists and tacticians. Strategists and tacticians do not know about logisticians until they grow up to be admirals--which they usually do.
Sometimes a logistician becomes an admiral. If he does, he must associate with admirals whom he hates; he has a retinue of strategists and tacticians whom he despises; and, on his back, is a logistician whom he fears. This is why logisticians who become admirals always have ulcers and cannot eat their ambrosia.
-- Unknown Author