"The Everest of motorcycling"


That's how an article in the Telegraph describes the iconic annual Isle of Man TT motorcycle races.

As an official, the Clerk [of the Course, Gary Thompson] tells me, this is the pinnacle of motorsport.

“There is the MotoGP, there are World Superbikes, there are many different levels – but they all have around 16 to 18 levels to them. There is only one TT.

“It is unique,” Thompson enthuses, “because there is no other motorsport event or road race like it in the world.”

The TT, Thompson tells me, is the brand of the island. This small, 200-square-mile island is world-famous because of it. And, for two weeks every year, the Isle of Man’s roads are closed from 10am to 5pm to facilitate one of the most dangerous road time trials in the world.

“We’ve been doing this since 1907,” Thompson says. “So to say that it’s a well-oiled machine would be an understatement. I work with the Highways Agency and whatever happens on that course during periods of racing is down to me – it’s my responsibility.

“And it’s become more difficult as the TT has gained in popularity,” adds the head official. The TT, Thompson says, has exploded during his tenure as Clerk of the Course thanks, in part, to the 2011 Guy Martin-led documentary Closer to the Edge.

I remember what Martin himself told me about the TT when I interviewed him late last year.

“I did crash at the TT, yeah,” the daredevil had acknowledged, flippantly. “I was conscious, sliding into a wall at about 170mph, and I just thought, 'oh that’s it, I’m dead'. 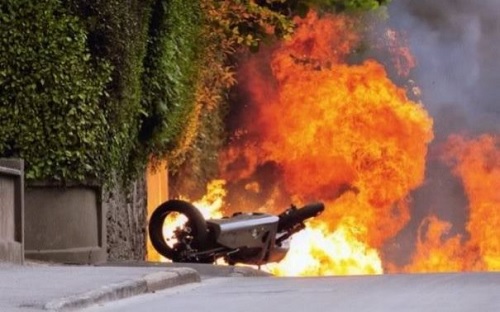 “But I remember thinking, 'there’s nothing I can do about this now',” Martin had added. “So I glanced off a wall – which broke a few bits and bobs – and then flew back through the bike, which was exploding. But I was all right in the end.”

There's an aura, a mystique, about the TT that eclipses all other motorcycle racing events.  Part of it is the death toll.  Literally hundreds of riders have died over the history of the race - five this year alone.  So dangerous an event would be shut down by the authorities in almost every country . . . but on the Isle of Man, it's recognized that the risk of death goes with the race, and is an inescapable part of it.

Guy Martin's fiery crash in 2010 has become yet another icon of the event.  Here's the trailer for the documentary 'Closer To The Edge', examining the 2010 race and focusing on Martin's near-death in his quest for victory.

The full two-hour documentary is available on YouTube (in HD as well as standard resolution).  It captures the spirit of the TT as perhaps nothing else can, apart from actually going there and being part of it for yourself.

It's truely amazing in this over-safety conscience, bubble-wrapped world we live in today, that this spectical still goes on, on public roads to boot....BRAVO!!

It's not quite to the level of Everest Mt. The latest calculation is that climbers there die at the rate of 10% of all who attempt it. Partly that is due to the incredible numbers of climbers that try. It's starting to resemble rush hour traffic conditions on that hill.

One of the odd things is how many of those were basically abandoned by their fellow climbers, and ignored by others passing by them. The high altitude oxygen/air-pressure losses seem to affect thinking in predictable and costly ways.

I would have loved to run the IOM races. Climb Everest? Ehh, not so much.

I went to the TT races in 1992, the ferry was packed with bikes, you had to book 6 months in advance. One of the things I liked best was Mad Sunday, when anybody could take their bike or tour bus out on the course. https://www.yahoo.com/news/bp/surviving--mad-sunday---the-isle-of-man-tt-s-most-dangerous-day-174208040.html
On most courses, the public is never allowed, at TT, when you have driven it yourself, you get a real appreciation of how fast these guys are going (one corner my best was 30mph, the real racers were triple that speed). The other treat is the antique racers, one day the old machines are brought out and you see authentic bikes, some close to a hundred years old, racing with the original safety gear, the sidecar monkeys are hard to believe that they survive.