A teaser combat scene to whet your appetite


Here's a teaser excerpt from my new book, 'Stoke The Flames Higher', Volume 5 of the Maxwell Saga. 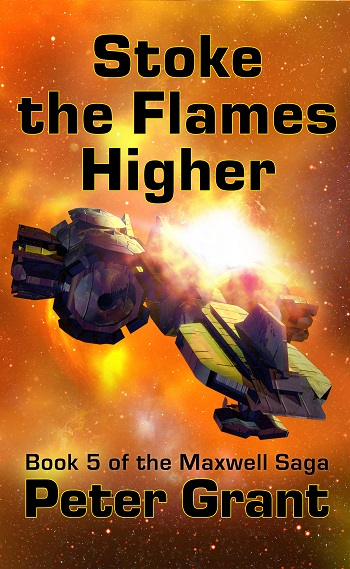 It'll be published within a day or two, as soon as Amazon's systems can process it.  I hope this whets your appetite to read the whole thing!

Senior Lieutenant Watson looked at the Plot display. The four small, wavering gravitic drive signatures were growing stronger as they approached. They were still moving at only one-tenth of light speed. Lieutenant-Commander Maxwell had provided performance data for the Devakai ships, suggesting they could move at twice that velocity if they had to – much less than the one-third Cee capability of his modern Serpent class vessel, but about right for century-old patrol craft from a galactic backwater. For a moment, he frowned, wondering why they weren’t using all their performance… then he relaxed. Their antiquated sensors and fire control systems probably couldn’t handle relativistic motion and Lorentz transformation very well. Both were inevitable complications when moving at significant fractions of light speed. That would explain their slower approach.

A light came on above his comm handset, indicating a call on the squadron tight-beam laser network. He picked it up, put it to his ear, and waited as a series of clicks indicated other Commanding Officers coming online.

“Squadron Commander to all ships. The enemy vessels are now at seven million kilometers’ range. They’re old and antiquated, with inferior weapons, so I think four of us can handle them. The other two can tackle the small craft that are spreading out, trying to get past us. Copperhead, take Rinkhals under your control and use your active sensors to intercept and destroy as many of them as you can. Use your defensive laser clusters only – a small craft isn’t worth the cost of a main battery missile. Boa, Mamba and Python, stand by to take firing directions from my ship. We’ll fire together when the enemy ships reach five million kilometers’ range. Their own missiles have an effective powered range of only two million kilometers, so we should be able to destroy them all before they can return fire. Acknowledge in sequence. Over.”

He clicked on his microphone when his turn came. “Copperhead to Squadron Commander, acknowledged. Question, please, sir. What if the small craft try to surrender? Over.”

“Squadron Commander to Copperhead. If they shut down their drives and activate their locator beacons at once, accept their surrender. If there’s any delay, or any refusal to cooperate, destroy them immediately. Over.”

“Copperhead to Squadron Commander, understood, over.”

He waited while the other ships acknowledged their orders, then spoke again. “Copperhead to Rinkhals. You take the port side and above. I’ll take the starboard side and below. Let’s go. Over.”

“Rinkhals to Copperhead, understand port and above, aye aye. Sheering off now. Over.”

“Copperhead to Rinkhals, good hunting. Out.”

He put down the handset, looking across the Operations Centre. “Command to EW, start looking for targets. Focus our active arrays downward and to starboard, and let’s see who’s coming to dinner.” A nervous chuckle ran around the OpCen.

Three icons popped up on the short-range Plot display almost immediately. He designated them Alpha, Bravo and Charlie, and turned his ship towards the closest. It was emitting no signature of any kind, but from its apparent size, it was either an assault shuttle or a cutter.

Three times they called, and three times were met with silence. Finally he called, “Command to Weapons. Weapons free on target Alpha.”

There was a momentary pause, then a slight dimming of the lights in the OpCen as one of the ship’s four laser clusters fired. From only fifty thousand kilometers away, its powerful beam sliced through the target like a hot knife through butter. There was a distant explosion as the small vessel’s fusion micro-reactor exploded, wiping it out and killing everyone aboard in a blaze of thermonuclear plasma. Its icon in the Plot fuzzed into a starburst, then faded.

“Command to Weapons, good shooting. Break. Command to Communications, make a general call to all Kotai vessels in the vicinity, demanding their surrender. Tell them to activate their beacons and cut their drives. If they don’t, there will be no more second chances. From now on, if we see a non-complying target, we’ll shoot at it without warning.”

The call went out, repeated three times, but again with no response.

“EW to Command, our ships have fired, sir!” Ensign White’s voice was excited.

Everyone in the OpCen craned to see the missile traces reaching out from the four Serpent class ships towards the four Athi vessels. It looked as if Commander Belknap had allocated only ten missiles to each of them, reserving half his ships’ warloads against possible future need.

The Plot suddenly showed two new icons, no more than half a million kilometers ahead of and below the four Commonwealth vessels, and well ahead of the four at which they were shooting. Almost instantly, missile traces appeared above the new vessels, racing upward towards the underbellies of Copperhead’s squadron-mates.

“It’s a trap!” Watson exclaimed aloud, forgetting OpCen procedure. “Those four targets must be drones! We concentrated on them like fat, happy dumbasses, while they sneaked in below them – and now they’ve fired at point-blank range!”

The enemy missiles were more than halfway to their targets before more traces of missile fire began to appear above the Commonwealth patrol craft – and that was itself an indicator of the problem. The vessels had not had time to change their orientation. The main battery missiles they were firing at the enemy patrol craft, and the defensive missiles aimed at their incoming weapons, were all ejected upward from their launch tubes by mass drivers. Once fired, they had to coast until they were clear of the ship’s gravitic drive field. Only then could they activate their own drives, turn around, and aim downward towards their targets. That took time… time they did not have, at such desperately short range. Defense would be up to the laser clusters.

Even as Watson realized that, he saw the flickers in the Plot indicating high-energy discharges from the four patrol craft. They were firing their lasers downward at the incoming missiles, but only two of each ship’s four laser clusters were on the underside. The two topside could not bear on the enemy’s weapons. He saw the gravitic drive signatures of each patrol craft begin to spool up as they tried to turn onto their sides, so that all four laser clusters could be brought into action… but it was too late. They would hit some of the enemy missiles, but the rest were almost upon them.

Watson realized, with a sick sensation in his stomach, that it was an almost perfect ambush, launched from the spacefaring equivalent of knife-fighting range. The Kotai had planned and executed it to perfection. He suddenly grasped how smugly parochial, how baselessly superior, had been his own attitude and that of the rest of the Lancastrian squadron. They’d assumed they were facing primitive religious fanatics. Commander Belknap had spoken of the Kotai as ‘barbs’ – barbarians. Others had used similarly contemptuous terms… but those ‘barbs’ had gravitic drives and nuclear weapons, and they had brains. No matter how outdated their ships, their tactics were as effective as anything he or his fellow Commanding Officers could have devised. Indeed, they were even more effective, because the Lancastrian Commonwealth Fleet would hesitate to accept certain death in order to injure the enemy. The Kotai would make the exchange gladly, provided they could take enough of their foes with them. You couldn’t deter someone ready, willing and eager to die.


You'll be able to read how that space fight turned out - and a number of others - within a day or two.

"No matter how outdated their ships, their tactics were as effective as anything he or his fellow Commanding Officers could have devised. Indeed, they were even more effective, because the Lancastrian Commonwealth Fleet would hesitate to accept certain death in order to injure the enemy. The Kotai would make the exchange gladly, provided they could take enough of their foes with them. You couldn’t deter someone ready, willing and eager to die."

First, reading this, I wish I had time to start reading your books! :(

@David: No, that's not an error. It's correct as written.

That was a fun morning read and really whetted the appetite.

Great read! now when I was reading your "tease" I thought of Tom Clancy's book "Red Storm Rising", when the vaunted American Carriers went up first against the Soviet aviation and got decoyed with Kelt Missiles with unpleasant results...Good read :)

It's up on amazon and I have it!

Likewise on Amazon.uk and just downloaded.

I see it available on the US Amazon site.

tis up and just picked it up will begin reading shortly

Bought. Read. Awesome. Will post review in near future.