In a comment to my previous post, reader 'A Texan' pointed me to the blog of a lady in California.  In recent weeks she's photographed several parking lots, at defunct shopping malls and offices, that are being used as storage areas for a glut of unsold new vehicles.  Here's just one example. 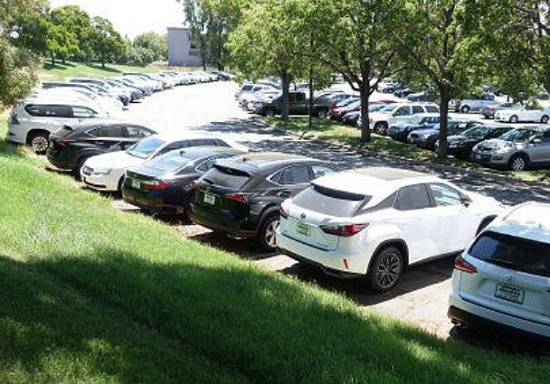 Here are her blog posts, with pictures and (frequently snarky) comments:

She mentions how many of the cars have been standing there for up to a year, perhaps longer.  Their protective plastic coatings have weathered away, and they're extremely dirty.  My concern is that they haven't been run in all that time, either.  How many times have we seen mice, squirrels and other critters making nests in idle engines - and chewing their way through cables, pipes, tubes and wiring in the process?  How many engines can handle standing idle for that long, never being turned over, without risking damage when they're finally put into service?  Finally, just think of the financial burden represented by all those photographs.  There are hundreds of millions of dollars tied up in those overstocked vehicles in her part of California alone.  How much is tied up across the nation?

It's not just the USA, either.  Some years ago, Business Insider ran a photo essay titled 'Unsold Cars Around the World'.  Here's just one image from it, showing thousands of new cars being stored on the runway and taxiways of an unused Royal Air Force base in England. 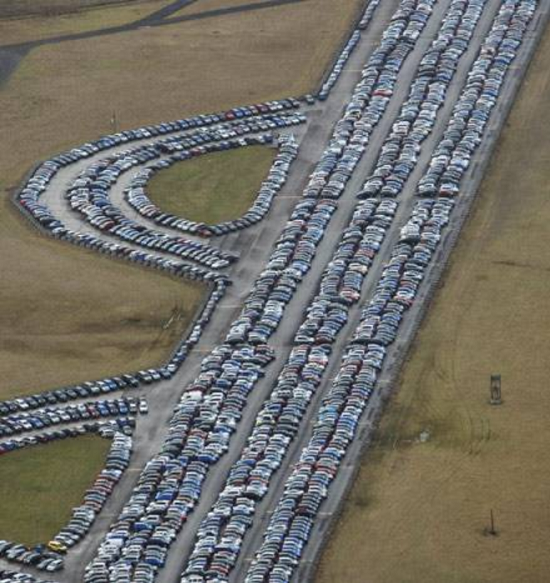 There are many more photographs at the link.  They make sobering viewing - and the situation has gotten considerably worse since they were taken.  Late last year, the Detroit News reported:

At the end of November, the U.S. auto industry had nearly 4 million vehicles in inventory, or a 72 days supply, according to IHS. Automakers typically want to see a healthy level of between 60 and 65 days supply, IHS says.

The industry has 250,000 or 260,000 units of excess inventory “that kind of needs to be weaned from the system,” said Joe Langley, IHS principal analyst for North America light vehicle forecasting.

The inventory and over-production situation has gotten significantly worse this year.

The imbalance was especially acute at General Motors, which entered March with a 123-day supply of cars and an 81-day supply of light trucks. Its Buick Division had an overall 167-day supply, the most of any U.S. brand. Buick's car stocks jumped to 239 days vs. 79 days a year earlier.

By comparison, Ford Motor and Fiat Chrysler US have sharply trimmed production of slow-selling cars in the first quarter. They were the only two of the seven best-selling automakers to reduce total March 1 inventory units from Feb. 1. Compared with a year ago, Ford's March 1 inventory fell 77,200 units to 678,300 and FCA was down almost 100,000 to 578,800 units.

In other words, General Motors could sell cars for 123 days - a third of a year - at its normal rate without manufacturing a single new vehicle.  How much money is tied up in that inventory?  Think billions of dollars.  What's more, that overhang in new vehicle supply is going to be made far worse by the glut of vehicles coming off-lease over the next few years, all of which must be re-sold as used vehicles - over and above getting rid of the glut of new cars.

I stand by what I said in my previous post.  The US vehicle industry is in dire straits, and I don't see how it can survive in its present form.

Sounds like car prices are way too high then...

Yeah. What about supply and demand driving prices? Smells bad--kind of a cartel odor, seems to me.

On the upshot, eventually they'll HAVE to drop their prices if they want to recoup ANY money from this stock.

Maybe my old Ford can hold out a little longer, just long enough for that price drop :)

(Irony: the reCaptcha was 'select all images with cars in them')

There are some companies trying to do something about it.
For urban/commuter cars, Elio (eliomotors.com) is working on (not yet shipping, but I think it may actually happen) a two seater (fore and aft) tricycle with good safety features; mpg in the 80ish range (small, aerodynamic,) with a new engine but as many off the shelf parts as possible with the target price being under $8000. Not electric, not hybrid. Built in the U.S. of A. They've got over 65k reservations, involving some amount of up-front whipout (credit for that phrase goes, as far as I know, to Dan Jenkins in Semi-Tough.


Assuming they do launch, I'm going to have to get in and out of one and drive it for a while before I put money on one; my back won't go for a lot of cars.

Is that why the automakers and dealerships are so aggressive and incessant with their ubiquitous and omnipresent advertising?

Another cause of this overproduction is the fleet fuel economy requirements. People don't want to buy some of the models, but if they don't build a bunch of them, they can't sell the cars/trucks that people actually want to buy because their fleet mpg ratings wouldn't be high enough to satisfy the government.

I agree with David - I bet a bunch of these models are small cars or bigger vehicles with small engines that the companies have to build to balance their fleet mpg for government requirements. I also suspect that GM is either still under government influence, or still has the mindset of being under government influence, and is building what they believe people SHOULD buy, not what they WANT to buy - aka, they are not operating as a profit oriented free market company, and therefore will be in trouble again soon.

As you mentioned previously, car prices have gotten out of whack with incomes. I'll be needing another car in the next year or so, but I will NOT be looking at anything near new due to the cost. I plan to pay cash for a 2005 - 2010 used vehicle with low miles. I also expect it will take me a while to find what I want. The last time I bought a car, after I decided on the model I wanted, it took me 2 months and a 120 miles drive to find one at a reasonable price with low miles. I paid 60% of what many dealers were asking and ended up with a car with less than 50% of the miles.

I've noticed that in both new and used cars, prices can vary wildly over 100 to 150 miles; I considered a new pickup truck 2 years ago and found that if I drove 120 miles I could save $6,000 compared to buying the same truck at the local dealer that I drive by on my way to work.

Both of these example show how our country is being sorted into classes by those who make wise decisions and those who do not - knowledge classes instead of social classes.

Elio is gonna be a long wait for a train that ain't commin'. The have been saying "we start delivery on___ day" for, What? 10 years? Its a scam and always was. Maybe if the "auto industry" made cars that people actually wanted (like the Elio fantasy) they might actually be selling.

Just FYI~
In MY experience--Doesn't hurt a thing to let a car set. 3 years? Just like yesterday.
I DID put some Stable in the gas tank. The battery may go dead, depends on how old- naturally...
Old cars- get in and pump the carb a couple times and fire away. Fuel injected- engage ignition and listen for fuel pump to spool up= then engage starter.
No muss no fuss.
YES- critters can be a problem- especially if near a food source (Like a barn with hay or grain- expect nesting! So do NOT do that!)

My experience from three decades of retailing automobiles. There are very few cash sales. Rare. The true customer is the lender. Lenders tighten, sales go down. The variables are numerous, and I can just hear all the "yeah, buts". What I said is bedrock.

In thousands of transactions, the old bore/stroke proved true. How much down, how much a month.

As to why the lenders have clamped down, I haven't a clue. What I do know is, if financing is available, someone will buy a three wheeled go cart with a lawnmower engine.

I got a certified formerly leased 2014 Hyundai Sonata with 19,000 miles on it for 14,000. Still has 3 years of bumper to bumper warranty on it and was spotless inside. Why buy new when you can buy certified???

I remembered seeing something in Germany where they were destroying excess new cars to prevent a glut on the market. I don't think that would work over here. I think the VAT and the tax structure had something to do with that over there. I paid cash for my truck, had to go out of state to find a truck in my price range, they were too expensive in the ATL area and suburbs.

I wish. Elio is a dead deal. I don't see much chance of anything every coming out of that factory besides surplus equipment. I was looking at one for a commuter vehicle and was very enthusiastic.

Aren't those runway pictures fake? Put there to obscure what's really there?