A succinct commentary on the US job market 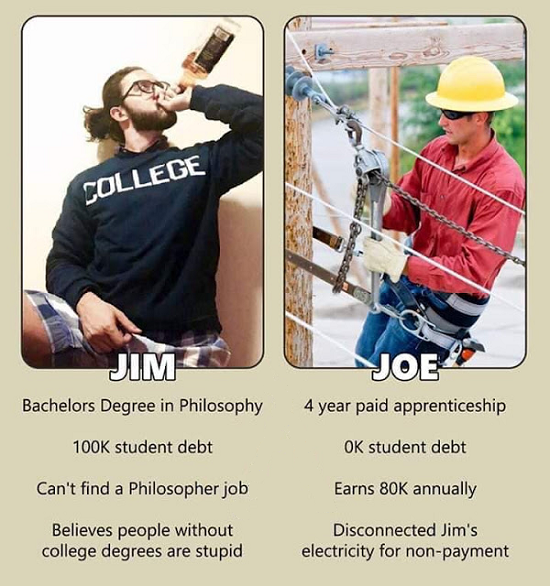 Yep.  The number of people still taking degrees in gender and/or ethnic studies, underwater basket-weaving and the like never fails to astonish me.  What's more, when they finally graduate (weighed down with student loans totaling tens, if not hundreds, of thousands of dollars), they bitch and moan and whine about having to repay the loans, and default at the slightest opportunity.  I know of several who've appeared overseas, teaching English in third-world countries, who openly and defiantly state that they refuse to go back to the USA because that would entail accepting responsibility for their student loans and repaying them.  The attitude of "I'm entitled!" is astonishing - albeit hopelessly naive, of course.  So much for our advanced society!

Is it any wonder that so many illegal aliens flood across our borders, intent on obtaining the same benefits (?) for themselves?  After all, they (or at least some of them) must surely reason, if Yanquis themselves can get away with such behavior, why can't they?

The thing is, a lot of these young people (and their parents) were taken in by a con scheme. I agree completely about useless degrees in grievance studies (I've never run across one in underwater basket weaving) but the colleges have inflated their expenses to a ridiculous degree, and unlike other unpayable debts, you can't get out of student loans via bankruptcy. (Paranthetically, I understand why; you had doctors running up huge debts to get through med school, graduating, and declaring bankruptcy even if they were making good money.)

If colleges and universities cut back on their bloated administrations, admitted that "diversity hires" and "diversity admissions" are not working out, and cut their expenses, this would be on its way to being solved. But every time the "generous government" raises the amount of student aid available, guess what the colleges do?

One of my pet peeves has been that those who advocate "free college for all" don't seem to get is that when the government pays for your education, the government gets to determine what course of study you get to take. Hand in hand with that will be aptitude tests to determine what category you fit into. Poor math skills? Sorry you can't be a doctor, scientist, engineer, accountant, business manager, etc. Inability to focus on details? you can't be a lawyer, pilot, computer programmer, etc. The government determines that we have enough unemployed gender studies grads? Your tuition subsidy goes away.

Full disclosure, I graduate from a state university in 1976, with an Engineering degree and no debt. Parents paid for the first two years, I paid for the rest by taking time off and working as a technician for a couple of years, and watching my pennies.

Our education system has turned into an industry and the "student loan" system is a huge part of it. Easy to get loans for something you've been told your whole life you have to have, and loans that never go away until you pay them off or pass away.

Take a look at the size of the student loan debt & all the smiling bankers who know they will be getting interest off those loans for the rest of the borrowers life.

Sad but that's the way the the system is set up.

Education is a good thing for everyone in our society, economic slavery is not. The trades ARE the way to go for a lot of people.

I have two STEM degrees, dual BS in Industrial and Systems Engineering, and MS in Operations Research.
At least half of the courses taken were busywork intended to pad the university coursework and provide employment for a bloated liberal arts faculty. By treating my education as a job and hunkering down I completed what is considered a five year BS program in 2.5 years with about a year's worth of community college transfer credits. The MS I earned after becoming employed by taking one class per semester at night after work so there was no rush to finish. It was at a small graduate only college where the coursework was much more relevant to the actual course of study.
Our current university system cannot continue as it's currently structured. It's only a matter of time until it crashes and burns leaving even more unemployed liberal arts majors with fancy yet worthless degrees.

I used to be something of a cautionary tale within my company.

Semi-literate deckhand: "Didn't you used to be a scientist or something?"

Me: 'Uh huh, marine biologist... well, neurophysiologist, really, but I also did biomimetics."

Deckhand: 'Well, Captain Neurawhozits, the crapper tank just blew out and you're the only one who knows how to fix the sanitizer. You're gonna need a respirator and a raincoat. They teach you that in college?"

...Because un-effing a 500-gallon poo bomb pays a lot better than writing about the reliability of chemical receptor nerve signals and then making bomb sniffing robots with it. Economics is cruel and honest.

Looks like a poster for what Mike Rowe has been saying.

My machining students do very well after graduation with minimal or no debt after two years with us.

Times have changed, four year college grads are no longer as rare a commodity.

I had a discussion over Christmas with some happy opera student at the local craft store. She was bemoaning her debt to one of her co-workers and I pointed out with her smallish frame and extreme dexterity she'd make mega-bucks doing welding, especially in the oil fields.

She was planning on making the mega-bucks as an opera diva.

I wished her good luck, and told her to keep her options open.

Her cow-orker told her she should listen to me.

I love interjecting myself into other's conversations. One of the perks of being a grumpy old man... Now where's my MAGA hat?

I skipped the whole system without a degree of any kind. My employers wanted me to be professionally qualified, so I opted for a business course for the certificates of a Chartered Institute here in England. As a mature student I bypassed the requirement for a first degree - which put me ahead already of those Bachelors of Arts when I passed te final exams years later. And because of my working experience I was immediately awarded a Fellowship of the Institute. No student loan to pay for, just hard work and study. And if merely qualifying to enter the exams needs a Bachelor's degree, passing the final must be the equivalent of a Master's - n'est pas? But I skipped the required 'experience' time for that, and also the experience times for the Associate and Fellowship grades. I'm not sure where that puts me on an academc scale, but it didn't cost me a penny.

I've seen the poster on Mike Rowe's page and others. Hubby has been saying for a decade at least that technical training is best.
And I love all the comments. Agree.

I see Harvard quotes about $75,000 each year for four years for tuition and room and board and insurance.

How the heck does anyone afford an Ivy League college, I wonder?

The thing is, we (as a society, I mean) tell kids all through grade school that they MUST get a degree, or they won't be able to get a 'good' job. AND that whatever they want to do, they should get a degree in.

Hence the poor schmoo with the 30K debt and the Masters Degree in Puppetry; It simply never occurred to him to hitchhike to LA, get a job running coffee for Jim Henson Studios, and work in from the edges.

From the mid '70's on, companies were using 'Having a degree' as a filter, and what KIND of degree didn't have much to do with anything.

The whole system is rotten. Has been for a while, and I speak as someone whose Father was an academic. But he was a scholar by avocation, and was bemused in later life at the amount of money society was prepared to pay him to do what he loved (he also published a lot, and had little respect for academics who didn't). He never claimed to have some Cosmic reason why being a Professor of History of Science and Technology made the world a better place; it was just the most fun he could conceive of having as a career.

In Emeryville and a nice college town well north of Denver, can't recall the name offhand. There was a little plot of land right there next to main street with just about a dozen telephone poles sticking up out of the ground.
They were the local lineman training schools to teach lineman stuff.

As a former cheng I used to drive by and say, "that's pretty cool."

Vocational schooling is civilization maintaining itself.

You know? The Greeks and Romans? They forgot that.

And yet people pay $ to learn about the consequences of forgetting.

Reminds me of why I keep putting off getting a degree (quit college after 3 1/2 yrs to get married 😒). I look at the University of Phoenix site and drool over the English degree classes knowing it will only cost me about $2500 and 2 1/2 yrs to finish, BUT . . then what? I can pick up all those books at Barnes and Noble on clearance and skip it all . .

Nuke Warrior said, "Full disclosure, I graduate from a state university in 1976, with an Engineering degree and no debt. Parents paid for the first two years, I paid for the rest by taking time off and working as a technician for a couple of years, and watching my pennies."

You can't do that now. The price of college has been increasing at triple the rate of wage increases for several decades. Yearly college tuition is over half the median household income these days. And that doesn't include room & board, books, lab fees, miscellaneous expenses, etc.

One option is to get your education through the military. I had two BS in Engineering when I joined (with no debt), but the Navy put me through a masters in Aerospace for free and.... you get paid salary while you are in school. It doesn't get much better than that, although you owe them a bunch of years after that.

From what I understand, there is zero reason to

So here is what I want to see:

With those two points, I find it highly unlikely that students will be able to rack up debt with degrees in Underwater Basket Weaving. Or that poor students (as in ability, not finances) will be able to continue to go to college and increase their debt load.