Bill Gates put out an interesting tweet a while back, containing an even more interesting graphic.  Click the image for a larger view. 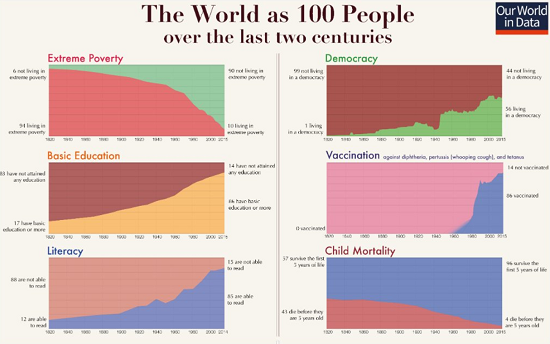 An article at Our World in Data describes how these charts illustrate history.

To see where we are coming from we must go far back in time. 30 or even 50 years are not enough. When you only consider what the world looked during our life time it is easy to make the mistake of thinking of the world as relatively static – the rich, healthy and educated parts of the world here and the poor, uneducated, sick regions there – and to falsely conclude that it always was like that and that it always will be like that.

Take a longer perspective and it becomes very clear that the world is not static at all. The countries that are rich today were very poor just very recently and were in fact worse off than the poor countries today.

To avoid portraying the world in a static way – the North always much richer than the South – we have to start 200 years ago before the time when living conditions really changed dramatically.


There's much more at the link, including larger versions of the individual charts above.

I think this is a very valuable series of charts, particularly when speaking to younger people today who've never known what it was like to be poor, or not to have some of the conveniences they take for granted.  That applies even in the First World.  I can recall my mother using a relatively primitive washing machine, with a mangle on top to press water out of laundry;  but those older than I will recall a time when there were no washing machines at all, and everything had to be laundered by hand.  Today's automatic appliances were unheard-of.  Another example:  how many of you recall a long drive in your car in which you confidently expected to have at least one puncture along the way (if not more than one), and tire life was measured in the low five figures, if not four figures?  Today's tires, almost puncture-proof and rated for many tens of thousands of miles, were a pipe-dream back then.  Want another?  How about polio?  When I was growing up, I knew children who were paralyzed or deformed as a result of polio.  Some were confined to iron lungs.  I was born just in time to benefit from Dr. Salk's polio vaccine.  They just missed it.

Those charts, and the accompanying article, are very informative.  Recommended reading.

"Better" is an experienced based call and what you had 200 years ago is not too far from what what you had for a LOT of years before that.
There have been some huge technological advances in the last 100 years.

I remember being part of the long line of people at Maunawili elementary school in Hawaii back in the early 60's, we all got a sugar cube with a drop of polio vaccine on it...

Vaccinations save a lot of lives and ended polio, as we knew it. I remember people in iron lungs, and it wasn't a pretty sight or life.

I'm old enough to remember not just hand-washing ckothes but women doing it in the local river. And carrying buckets of water because many properties still didn't have piped water or indoor plumbing of any kind. Even outhouse plumbing wasn't universal. Not because of war damage but because they weren't modernised yet. And gas lighting was still common too - even oil lamps were still in use. I'm talking about the 1940s-50s, no the 19th century - I'm only 78.

I thought the Democracy chart was interesting. Especially the significant dip in people living in Democracy from 1920 to 1940. Socialism (aka Communism and National Socialism) anyone.

Sincerely pray that we are not on the cusp of another one of those downturns.

My grandmother still owned a washboard though she had upgraded to one of those big round machines with the roller mangler mounted on top. In good weather the clothes hung on lines in the back yard. Winter or rain we had lines in the basement. You had to plan ahead as it could take many hours for clothes, especially jeans, to dry.
I remember getting the Salk polio inoculation and our entire town lining up for those sugar cubes with the blue stain on them that contained the Sabin oral vaccine.
Call them what you will, communist, socialist, progressive, at heart they all after one thing, total control over everyone else. And to accomplish their goal it would seem they have decided that the elimination of a knowledge of history is necessary. So many of our young simply have no concept of the obvious truth that things now were not always so, and that what today is considered unacceptable and wrong might have been necessary and unavoidable under past conditions.

The point of the world getting better, well, if you look at the last 150 years, yeah, getting a hell of a lot better, but if you look at the last 20 years and only at the developed world... not so much.
Sure, internet keeps getting faster, computers more powerful, phones can beat the computers that controlled the space shuttle at poker, convinced them to vote republican and sell them a bridge.
But society is at the brink of collapse. Environmental hysteria has replaced intelligent environmentalism. Racial tensions are rising. The rich are getting richer while the poor and working poor are getting poorer. People go into dept for decades to be indoctrinated.
So in the end, the world is getting worse in the first world.

One of the benefits of doing genealogy is that it reduces statistics to people and families. The sweeping tides of history don't mean much when you're reading the death certificate of an infant that died of pneumonia or stumble across a family that lost six children to diphtheria in a single summer. 73,000 US MIAs in WWII become a bit more real when you're reading about one guy who disappeared somewhere over Bougainvillea in 1943. I see triumph and tragedy on a regular basis. I've learned two things. On the up side, we have it better than any time in history. On the down side, people are people are people. Anything done by people in the past can be done in the present, will be done in the future.

India just announced that all villages now have electricity.

I believe the main driver of this phenomenon, that young people today think the world is getting worse, is simply communications.
Misery, repression, poverty; all diminishing, but seeing it, hearing it, and finding out about it is so much easier and more efficient- and far more graphic. In 1960, "The children are starving in India", a much-heard expression, was almost a cliche, even as it was true.
Now, it's a thing that can flood out on YouTube, LiveLeak, and such.
Not to mention, being aggrieved and affronted is so much more entertaining and gratifying in a world of instant social media.

I certainly remember my Mom using a "Wringer" type washer with a gasoline engine. Tall chimneyed "coal oil" lamps, "ice boxes", and battery powered radios(only at night)for entertainment, and sitting on the counter turning a butter churn by hand(a very young and small hand). It was the world seen through the eyes of a child but it was quite pleasant. By the time I was in grade school we had left the farm and moved to town with electricity and running water. Much better I suppose.

The world has improved remarkably in my lifetime. However, the trend curve is now moving downwards. Is it a better world than it used to be? Undoubtedly. Is it improving right now? Not a chance.

The summer I graduated high school I changed punctured tires so often I could do it in ten minutes. This was from stopping the car to restarting it, with tools properly stored.

I can't remember changing a tire in the past 20 years.

I've met some who wore a brace to deal with the result of the polio they survived.

Ma tells the story of how "the whole town lined up" for the polio vaccine.

And "a pox on..." is relegated to expression - at least for now.

Also, in the last 3+ decades, I've had to deal with one, maybe two automobile tire punctures - which were plugged. Bicycle is another matter, but there are *kevlar* bike tires now.