"To build the cities of the future, we must get out of our cars"


That's the title of a long and thought-provoking article at National Geographic.  The problem with the article, as I see it, is that it prescribes to city-dwellers what they need, what they should want, whether or not they really want it.  It relies on official policy rather than public demand.  Here's a brief excerpt to illustrate my point.

“The problem with urban environments that are auto oriented,” [Calthorpe] said, as we wound our way toward the Bay Bridge, “is that if there’s no choice, if the only way to get around is in a car, lo and behold, people are going to use cars too much. Too much for the climate, too much for people’s pocketbooks, too much for the community in terms of congestion, too much for people’s time. I mean, every way you measure it, it has a negative—no walking is a prescription for obesity. Air quality feeds into respiratory illnesses.” 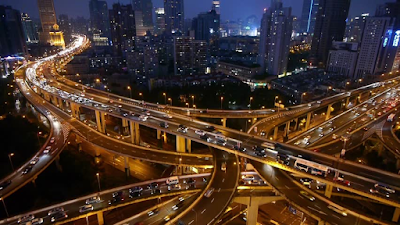 In Calthorpe’s utopia, in China or America or elsewhere, cities would stop expanding so voraciously, paving over the nature around them; instead they’d find better ways of letting nature into their cores, where it can touch people. They’d grow in dense clusters and small, walkable blocks around a web of rapid transit. These cities of the future would mix things up again: They’d no longer segregate work from home and shopping, as sprawl does now, forcing people into cars to navigate all three; they’d no longer segregate rich from poor, old from young, and white from black, as sprawl does, especially in the United States. Driving less, paving less, city dwellers would heat the air and the planet around them less. That would slow the climate change that threatens, in this century, to make some cities unlivable.

To do all this, in Calthorpe’s view, you don’t really need architectural eye candy or Jetsons technology—although a bit of that can help. You need above all to fix the mistakes and misconceptions of the recent past.

In 2016 the [Chinese] Communist Party Central Committee and the State Council, the highest organs of the state, issued a decree: From now on Chinese cities were to preserve farmland and their own heritage; have smaller, unfenced blocks and narrower, pedestrian-friendly streets; develop around public transit; and so on. In 2017 the guidelines were translated into a manual for Chinese planners called Emerald Cities. Calthorpe Associates wrote most of it.

You see?  Calthorpe's prescription might be made to work in China, where the state controls everything and private citizens have little or no choice in the matter.  However, we live in the United States, where individuals assert their freedom and independence from authority.  How are you going to persuade them to give up that freedom and independence, and submit to greater regimentation of society by the "experts"?  Aren't "experts" the ones who got us into our present urban sprawl mess in the first place?

I distrust any proposal that requires me to surrender my individual liberties, freedoms, rights, etc. in the name of solving society's problems.  America was built around the individual, not the group.  This sort of article focuses almost exclusively on the group, the community as a whole, and expects its individual members to co-operate.  What if they don't want to?  What if some of them prefer a different approach?  Under such plans, they lose.  They'll be forced to comply, whether they want to or not, because their alternatives will be legislated or regulated out of existence.  That's the road that leads to totalitarianism - Big Brother writ large.

I highly recommend reading the article in full, because it makes a very good case for solutions to our present urban problems:  but I also recommend finding alternatives to the solutions it proposes, ones that safeguard our freedoms as well as improving our quality of life.

We are not ants, or bees or birds. We do not need hives, hills or flocks.

A pox on all those who know "better"

It actually wouldn't be that difficult to achieve Calthorpe's dream, omce government starts demanding service on school debt in the form of assigned employment, which they would ensure is coupled with assigned living space.

Why do I picture the author in front of his computer, pants around his ankles, going to town while flipping through pictures of Soviet-style block housing?

In their minds, people are soulless worker automatons that don't have individual needs or desires. Soulless automatons don't have to be respected or have their wants thought about. They can just be commanded to live where the leaders want them to live.

Autos replaced horses because they worked the task better, the same way metal replaced rocks.
Things are replaced because the replacement works better or at the point of a bayonet.

Here in the US we are all kinds of spread out. A better transportation system could be done, it would be spendy. I expect people to be forced into the cities.

Wait, I think I see a movie in all this- "The Rise of the Central Planners" or, "When Nerds Attack."

California has been doing this, and it’s just increased housing prices and congestion. La city has deliberately increased congestion as a way to discourage driving.

Years ago, I was a member of the American Planning Association. Their professed ideal (both then and now) is a "planned unit development" where everyone lives on a green belt, within walking distance of work. Cars are unnecessary, you see, since everyone lives where everything they should want is conveniently close by.

It never occurs to those mental pygmies that perhaps not every employer is going to open a small shop within walking distance of the people trapped in the cough, cough Utopia. And strangely enough, they consistently fail to explain how they'll force businesses to relocate, readjust the size of their workforces, and still be able to do whatever it is they've done before.

It annoyed me mightily at the time; now, it makes me angry at the hubris of those who think to force their ideals upon the rest of us.

"Why do I picture the author in front of his computer, pants around his ankles, going to town while flipping through pictures of Soviet-style block housing?"

No, no. Be fair; NOBODY does that to pictures of Soviet-style block housing, where the bad concrete is crumbling before the building is finished (a hallmark of the Soviet style). They do it to Artist's drawings of Bauhaus style block housing.

Somebody REALLY needs to do a National Geographic article, "The long, miserable, and expensive history of City Planning failure". Because it isn't simply a failure of Socialism; it fails when it's tried under all kinds of political and economic systems.

Ah, the lure of city planning. You just want things to be more efficient, why can't the peons see this?

Really though, it boils down to the same argument I offer to one of my tree hugging co-workers, if you want me to be green, make it a smart decision that appeals to me, despite me not being green. I don't think I'm raping the earth with my oil consumption, but I am raping my wallet so I drive the most efficient vehicle I can. Does that make me green? No. But it doesn't matter if I believe what you do, if the end result is the same.

You want intelligent cities that work well without cars? In America, you can't (yet) make people live there. But you can make them WANT to live there.

People don't take public transit because it's slow, expensive, dangerous, and doesn't go where you want to go. Peter O'Toole is a transportation expert with the Independence Institute and is currently predicting the impending bankruptcy of Denvers RTD. Lots more here:
http://ti.org/antiplanner/

When mass transit turns a twenty minute drive/2 hour walk into a two hour ride with transfer plus a 20 minute walk transit has failed. Miserably.

“You want intelligent cities that work well without cars? In America, you can't (yet) make people live there. But you can make them WANT to live there.”

Actually, more than a century of experience shows that, no, these pillocks CAN’T make them want to live there. In some places and some cases it has been demonstrated that, by and large, people would rather live in barrios consisting of knocked-together hovels with dirt floors and no running water.

These idiots fully expect their politicians to FORCE you and business owners to relocate to the "optimum" positions they will select. Want and need have no bearing on it, as far as they are concerned.

As someone who lives in a small city in a largely rural area, and having to schlep a power wheelchair around, going without a fossil fueled personal vehicle is not an option. Yet the central planners assume that we all live in an urban area, and only go to work, to a restaurant, to a nightclub and then back home.

Oh wonderful, another big city statist who thinks all the serfs should be doing what the Lords & Ladies tell them. Never mind if us vassels have other ideas of our own.

Sorry, but I have access to free city bus transportation through my work. There's even a bus stop about a block from my house, and another about a block from my office. The reason I don't use it is because it would mean riding the bus for an hour (along with transferring buses) each way. And when I work evenings the bus is no longer running when I get off anyway. Same with Sunday's and holidays. It takes me 12 minutes to drive to work and park 30' from the door. Hmmm? Should I spend 2 hours riding a bus, and another 15 minutes walking? Or just do it myself on my time in less than half an hour?

Not to mention, NOBODY wants to walk even a block in the winter when it's -30°F without windchill. Add in another 20-30 mph wind and it's H*E*Double Hockey Sticks NO!

Their ideas typically call for spending more each year on their "fixes" than what our GDP is. They can't do math, and certainly not economics. Every time they spout off about how horrible climate change is they show how truly ignorant they are. If none of your model predictions resemble observed data you don't have a valid prediction.

Portlandia has been doing this for decades with the same effects. Every time I have to go through there, I hate it more. Except for Powell's bookstore and the extremely well-preserved submarine (the last diesel-electric sub to serve in the US Navy, and some of the tour guides had served on her), there's little there for me.

No one wants to do it in 100° heat and 100% humidity, either. You don't look very businesslike arriving drenched in sweat.