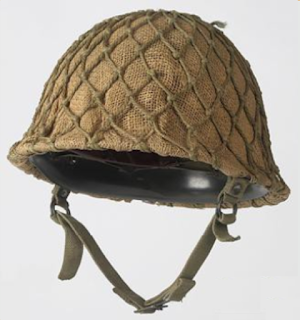 Way back when, I wore a staaldak (literally "steel roof", a metal helmet) during part of my military service.  It was basically the same technology that was used during World War II, intended to protect one's head from shell fragments and other lethal (but little) stuff that was flying around the battlefield.  It wasn't very good at its primary job (although it was useful as a kettle or pot for cooking, or a makeshift basin for washing!).  Fortunately, I never needed it the hard way.  South Africa's M1963 helmet (shown here) was patterned after the French M51 OTAN model, with an inner plastic liner and webbing cover, plus a locally designed chinstrap system.  It was supplemented, but not fully replaced, during the 1980's by an Israeli composite helmet.

The US Army began to replace its M1 steel helmet with the PASGT composite helmet during the 1980's.  Since then it's been through a second and third generation of composite combat helmets, with a brand-new fourth-generation helmet just coming online to replace them.

I'd heard that the current-issue US Enhanced Combat Helmet was a pretty good product, but I've always been a bit dubious about bullet resistance claims.  I've seen too many dead soldiers!  Nevertheless, its performance has just been illustrated in very emphatic fashion.

Staff Sgt. Bryan McQueen was nearing the end of his tour in Afghanistan with the 1st Security Forces Assistance Brigade on Sept. 3, 2018. He, his fellow soldiers and nearly 50 Afghans were headed to a security meeting, as routine as any other daily assignment.

McQueen felt what he could later only describe as a horse kick to the back of his head and he fell flat to the ground, landing on his face.

But in seconds he was on his feet with a simple question.

“Did these (expletive deleted) really just shoot me in the head?” he said.

The 7.62x54mmR round from the truck-mounted machine gun struck the back of McQueen’s helmet, shredding some of the materials but not penetrating the shell.

This week that same helmet, bisected and mounted on a plaque with McQueen’s name and the appropriate unit coinage, was presented to him here at a Personal Protective Equipment soldier return ceremony. 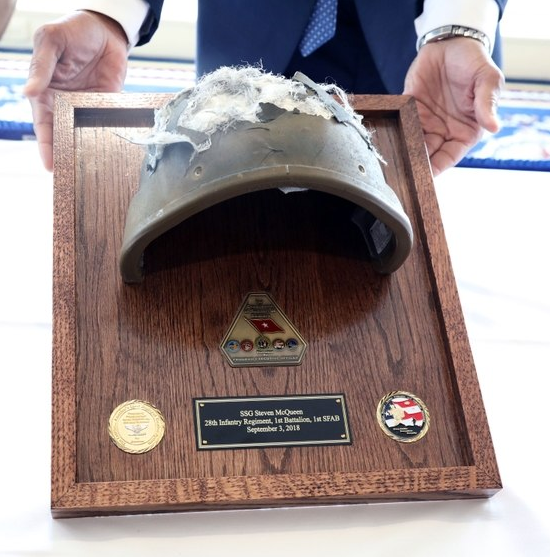 The force of the round did cause a minor brain bleed but no permanent damage.

That's impressive!  The Russian 7.62x54mmR round is the ballistic equivalent of the US .30-06 Springfield or NATO's 7.62x51mm.  It takes a lot to stop one of them in its tracks like that.  Steel helmets usually won't do more than slow them down a little.  I can think of several former comrades-in-arms who would have been very grateful for one of those helmets, way back when . . .

If the new Integrated Head Protection System helmet does, indeed, offer "100 percent greater protection against head trauma injuries" over present-generation helmets, it'll be something very special.  I hope it works as advertised.

I recently read an historical commentary that told how service doctors began seeing an alarming increase in head wounds shortly after they began issuing helmets as part of standard field garb.
It supposedly took them quite a while before they determined that without the protection of those helmets those wounded would have been killed on the spot.
On a somewhat related topic, I've also read that tremendous strides in the treatment of severe burn trauma were made by Army Air Corps and later Air Force doctors as such injuries were common amongst pilots and air crew returning in shot up aircraft. But then much the same could be said of the use of anesthetics and field surgery coming out of our American Civil War.

And to further what Uncle Lar is talking about, the whole concept of Triage and Field Surgeons and such comes from the wonderful times of the Napoleonic Wars, specifically from the French.

And Modern Nursing does definitely get it's beginning from the Crimean War and Florence Nightingale etal.

Something about the pressure cooker of war that stimulates thought. Well, and canning, too (Napoleonic Wars, again...)

I think a lot of the emphasis on head trauma injury prevention in the newer generations of combat helmets, for the U.S. military at least, is going into mitigating TBI and concussion injury from blast effect.

IEDs produce relatively little fragmentation as compared to HE shells from artillery, mortars, and grenades, which is why blast injury became the 'signature wound' of the late unpleasantness.

I recall a story from the Grenada invasion, a paratrooper was saved by the then-new "Fritz" helmet, after a meeting with a round from a Cuban's AK-47. It stopped the 7.62×39 ball, to the Troopie's relief. It was the first "save" from direct rifle fire by the design...

There's a video floating around from 2013 of a US Marine surviving a shot to the head while on patrol. That looked like it was only a glancing blow, whereas this round would have scrambled the poor soldier's brains inside his skull.

Whoever designed these things earned his pay!

That is an awesome save. TBI may be a hellacious (yes, that is a word blogspot, check your Webster's) PITA, but it's better than being dead.