Fifty years ago today, on March 2nd, 1969, the supersonic Anglo-French airliner Concorde made its first flight.

It held out the promise of much faster air travel, "shrinking the globe".  As Flight International noted at the time:

From the beginning of time until about 1840, the distance a man could travel between getting up and going to bed was about 75 miles… then technology produced the aeroplane, and today a man can travel 7,000 miles in his waking hours. When the supersonic era is inaugurated this 12h distance will have become 12,000 miles, which is pretty well anywhere on earth.


Sadly, due to its exorbitant capital and operating costs, that promise was to remain largely unfulfilled.  Competing projects, such as the Soviet Union's Tupolev Tu-144 and the USA's Lockheed L-2000 and Boeing 2707, fell by the wayside under those economic pressures.

The Concorde entered commercial service with Air France and BOAC in 1976, but was never a commercial success, despite being the flagship service of those airlines.  Its technological fragility was underscored by the accident that ultimately led to its permanent grounding.  On July 25th, 2000, Air France Flight 4590 suffered a blown tire on takeoff.  Debris punctured a fuel tank, which led to a fire and subsequent crash, killing everyone aboard. 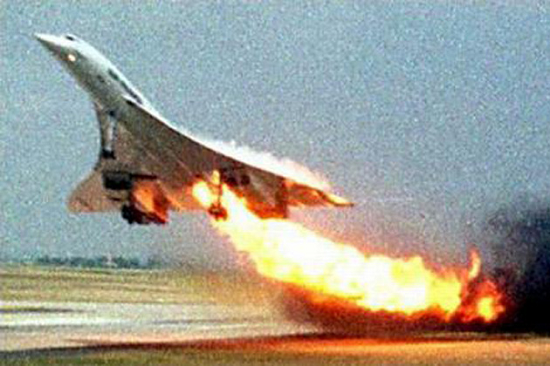 The only supersonic transport currently under discussion is a large executive jet design, the Aerion AS2.  Whether or not it will ever fly is an open question.  The technological demands and economic burden of supersonic passenger travel remain daunting, even today.

The Concorde was a technological triumph especially using the technology of the time. The Concorde that crashed was the one used in the movie "Airport 1979". I found that out doing a blogpost years ago in the "Airport" disaster movies of the 1970's.

My dad was stationed at Gander, Newfoundland when Concorde was doing a number of training landings there since Gander would be the first airport available on this side of the Atlantic in case of emergency. Mom would've killed me if she'd known that I'd gone riding my bicycle out with some friends along the Trans-Canada Highway to get under the approach path. What a beautiful sight it was: a sunny spring day with the brilliant white Concorde approaching over the lake and roaring overhead.

If the sonic boom can be tamed (and I think it can be), then with today's advances in engines and materials, supersonic civil aviation could become a reality.

Effective and economic supersonic requires height to go fast. I think Elon Musk with his BFR concept may have the right idea (hearkening back to the golden age of science fiction when transcontinental rockets were a thing.)

I can seriously see a hybrid air breather/rocket plane, air breathing for take off and gaining altitude, rocket for high altitude and speed.

I had read that at that time, the 747 took 4 times the passengers at 1/2 the fuel for the same flight from JFK to Heathrow. Because of that economic reality, every BOAC flight was subsidizing the Concorde, which lost money for every flight it made.

Still, one of the true regrets of my life was that I never had enough money to make one flight on the Concorde, just to do it.

I’m fortunate that I flew four times on Concorde. Always due to getting an upgrade from the regular flight.as I was racking up the frequent flyer miles. The best part was calling the limo service to come and pick me up 5 hours earlier than originally booked. Good times.