Let's hear it for the electric Beaver!


No, not the animal.  This one has wings.

Two Pacific Northwest companies — MagniX, an electric propulsion venture headquartered in Redmond, Wash.; and Harbour Air Seaplanes, an airline based in Vancouver, B.C. — say they have a firm plan to create the first all-electric fleet of commercial airplanes.

MagniX aims to start by outfitting a Harbour Air DHC-2 de Havilland Beaver [shown below] with its 750-horsepower magni500 electric motor for a series of test flights scheduled to begin by the end of this year. 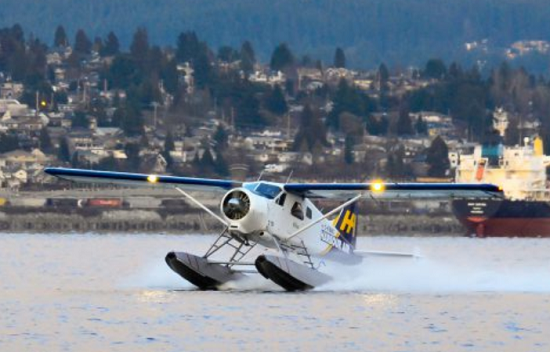 “The excitement level is yet another notch up,” MagniX CEO Roei Ganzarski told GeekWire, “because now we’re not talking about just putting the system on an ‘Iron Bird’ on the ground and having it turn a propeller ... but actually taking an aircraft into the sky, an actual aircraft that will be operating and taking people and cargo back and forth as well.”

That's a great way to rejuvenate a radial-engined 1950's-vintage aircraft.  The change of powerplant has important implications for operating economy, too.  The airline's founder and chief executive says:

The company operates a network of 12 short hops from Vancouver, with flights averaging about 30min, says McDougall. Destinations include Seattle Whistler, Victoria and elsewhere along coastal British Columbia.

Those routes are perfect for the magni500 propulsion system, which will have power enough for 30min flights and 30min reserve flying, he says.

After flights, Harbour will need to charge the batteries or swap in fresh battery packs. But McDougall notes lithium batteries charge quickly, limited only by the amount of "amperage you can throw at them".

"The moving parts are infinitesimal compared to what there is in a turbine or piston engine," he says of the magni500 system. "The maintenance is virtually nil."

I'll be watching this with great interest.  The aircraft should be a great deal quieter, without a honking great radial engine turning up front;  and if its operating costs can be held down by the new technology, it'll make the airline more profitable and (hopefully) lead to lower air fares for its passengers in future.  There appear to be all sorts of upsides to this.

Now, when will we see something similar appear in light aircraft at US airports?  I reckon private pilots would love to have a simpler, more cost-effective power plant for their Cessnas, Pipers and Cirruses.  MagniX is developing one, the Magni250, with half the power of the Magni500 model to be fitted to Harbor Air's Beavers, so it's entirely possible we'll see that in our skies soon.  It looks a lot smaller and lighter than current powerplants, too, which will be good for aircraft handling and payload.

I dunno, sounds a lot like trading in a world class soaring plane for a Schneider SG 38. If you are towed aloft with a gound mounted winch, it'll go around the field once, then land.

Hmmmm. Batteries. On a bush plane often called to the far north where temps in the low -40C range are common? Good luck with that.

A good number of Beavers and Otters in SE Alaska have been retrofit with turbine engines to replace the grand old radial engines. The newer turbine engines reduce noise levels and I imagine are more efficient. I've sat on the shores of mountain lakes and fogged/stormed in beaches waiting for the roar of a Beaver or Otter in the sky coming to pick us up and take us back to town after a week or two of hunting. Not sure how much faith either I, or the pilots, would place in an engine that required a charging station in the wilderness to make it back home...

There's a future opportunity here for someone who can come up with a practical electric jerrican. In honor of AFD, I recall my comment about electric cars. "Generac announces their line of trailer generators." Not sure how that might work with aircraft.

Won't happen soon.
AVGas has roughly 4 times the energy per weight compared to a modern battery.
Hell, dried cow dung has rougly 50% more energy per weight than the battery.
And AFAIK in flight, weight matters.
At the current state of technology it is possible to get a electrically powered hobby plane, but commercial is not viable.
You lose either too much range or too much payload.

Lithium batteries recharge quickly and efficiently up to 85 percent, then need to trickle that last 15 percent. Given that full charge equals just an hour of flight, I'd prefer designing the plane to make a quick battery change. Bad weather conditions could easily require all of the battery reserve, and if the battery wasn't fully charged..

They will also need to do frequent tests on their batteries, especially after dipping into that reserve capacity. When will they replace the cells? The industry standard is 50 percent, which would mean the plane barely makes the flight with good weather, let alone bad. The battery powered buses in LA getting stranded are one thing, falling out of the air is another thing entirely.

OK, I can see how this might make sense in a *very* limited market such as the one described. As for GA, I suppose that if your flying consists of occasionally tooling around 'the patch' making touch-and-goes or hopping over to a nearby town for lunch it might be feasible. I suspect making an extended cross-country would be problematic. Who'd want to land every 1/2 hour or so to sit and recharge or swap out batteries, assuming that the FBO had the capability to do so?

And of course to me, taking that throaty-chuckling P&W radial off of a Beaver is sacrilege in any case. The growl is a big part of the airplane's appeal.

MadMcAl nailed it. The specific energy of a good lithium battery is around 450 Watt*Hours/kilogram. There have been some lab batteries that have gotten to around 900 WH/kg Most are closer to 350. Gasoline is 12,000 WH/kg.

That's practically an insurmountable disadvantage. Then consider that electric car charging systems try to keep them between 30% and 90% of charge for best safety and battery life. Then consider that virtually everything on an aircraft better be de-rated, now you're down to perhaps 60% of what the battery can hold.

I wish them luck, I hope it works, but physics is a real bitch about such things.

Battery power density is at the ragged edge so any attempt to
increase range would come at the cost of weight. I doubt this
will be anything more than a novelty with an extremely short
range. Even at 100 knots, the power consumption would be
massive!

which will have power enough for 30min flights and 30min reserve flying, he says.

Given the weather and variable seas in that area, you won't find me in anything with 60 minutes of usable power. No thank you!

One wonders how much usable load they will be trading off to get the batteries in, and routine battery changes are going to lead to connector problems, vibration issues, etc. Personally, I wouldn't fly on one. $250K for an engine overhaul is cheap compared to the liability of "oh, they ran out of battery because of the weather and..."

What everyone else said. This is an unwanted solution looking for a problem to fit.

No one is addressing the 5,000lb red-tape monster in the room. Good luck with the FAA getting all aspects of the system flight certified, especially considering the tendencies of modern batteries to rapidly discharge and burn everything around them. The FAA doesn't really like things that tend to rapidly become catastrophically exothermic. They are actually pretty much death on catastrophically exothermic.

Cute for a homebuilt experimental, maybe let Burt Rutan play with them, but on a Beaver? Or any semi-commercial or commercial application? No, heck no, big Heck NO!!!!

And, again, on a Beaver? Modern radial, modern turboprop, even a modern in-line non-turboprop. Beavers are meant to make noise.

Have they forgotten that you can't even ship Lithium Ion Batteries by air? If they are in your checked baggage (drills, etc.) they will be confiscated by TSA (ask me how I know. . .). They have been known to release all their energy catastrophically and burst into flames or explode. I am not sure that is a viable system to stake your life on, but I could be wrong. Maybe someday, but I will wait until batteries can match the range and reliability of combustion engines.

I think I'll pass on that one.

remember also that as fuel is consumed on an aircraft of any type, the weight of the fuel carried is going down. as battery power is consumed the weight of the battery is a constant. has anyone considered this in their hype to get electric aircraft into the air?
a more efficient means of generating/storing useable electrical power should be tested than just batteries. fuel reformer fuel cell systems supplying the electrical needs of the motor? straight up liquid hydrogen fuel cells?
From an engineering viewpoint, I see battery powered flight a losing proposition as far as cargo carrying aircraft go. the energy density just doesn't work.
for sport aviation and other such time limited flight battery power may be just the ticket. solar cells for long duration seem viable, but the sun does set.
Electric motors don't loose power as altitude increases. they only lose cooling capacity as air density goes down. Cabin pressurization sources would be problematic.

I don't see a mention of the other elephant in the room, capacity reduction vs recharge cycles. How quickly will these batteries lose their reserve capacity as the media is damaged by the heating from rapid discharge, and then tossed back in the charger before they cool? You can cook a li-po battery into uselessness in very few charge cycles doing that, and if you don't expect mechanics and pilots under time pressure from scheduling to do that, you don't understand people...

Why are aircraft so loud? Why aren't small aircraft as quiet as cars and trucks?