I note that Yemeni rebels have claimed responsibility for attacking Saudi Arabian oil refining facilities using (presumably) Iranian-manufactured and -supplied drones over the weekend.  I'm not so sure.  Consider this map of the region, with the area of the drone attacks highlighted by a red marker. 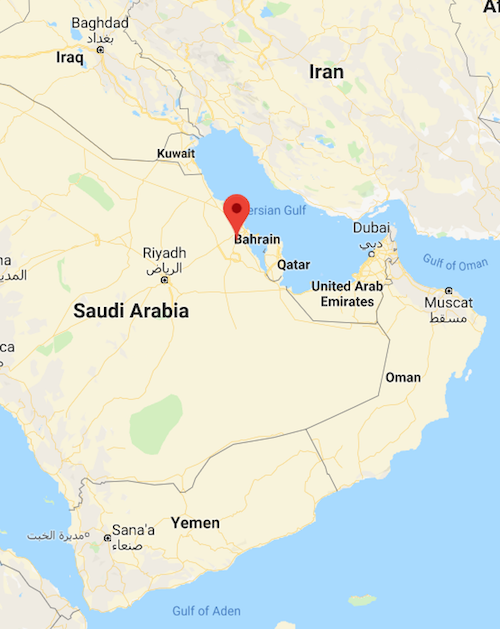 That's an awful long way from Yemen, where the Houthi rebels are fighting.  What's more, the Yemeni border area is well covered by radar, with missiles and fighter aircraft on permanent standby to intercept ballistic missiles and other attacks launched from rebel territory.  To suggest that the drones flew all that way north, penetrating all those air defenses, without being detected, is (to me) suspicious on the face of it.

On the other hand, look at Iran, the main supporter (and supplier of armaments to) the Houthi rebels.  It's much closer to the target area, and could conceivably get operators even closer through using innocent-looking ships to approach the Saudi coast without incurring suspicion.  What's more, according to the BBC, "the US government believed that 15 buildings at Abqaiq had been damaged on the west-northwest sides [i.e. the sides facing towards Iran], not the southern sides facing Yemen".  On the face of it, without any evidence to prove that the drones did, in fact, come from Yemen, I'd suspect that Iran launched and controlled the drones (or cruise missiles) directly.

The question is, what can be done about it?  I don't think the United States should get directly involved;  after all, our territory and/or personnel weren't attacked, so we have no axe to grind here, apart from our ally being the victim.  I think we should leave it up to the countries in that region to coordinate a response among themselves.  (Israel also plays into this;  it has its own problems with Iran, and might be more than willing to join a coalition effort against that country.)  What's more, using a similar tactic against Iran (drone attacks on its infrastructure) might be just as effective, and provide plausible deniability as well.  ("Oh, some of your Houthi friends' drones must have gone off-course, and hit you instead of us.  Terribly sorry about that, and all that sort of thing.")

The situation is complicated by the fact that Iran has, effectively, two governments and two militaries.  The "regular" government is one thing:  the Islamic Revolutionary Guard Corps (recently designated as a terrorist organization by the USA) is entirely another.  The latter is much more radicalized, and usually operates at the direction of fanatical religious leaders rather than the national political authority.  If Iran did, in fact, launch these attacks, I'd say they were much more likely to come from the Revolutionary Guard than from the country's "traditional" armed forces.

I think we're very fortunate that the USA is, as near as makes no difference, self-supporting in oil production.  Most of the rest of the world isn't so fortunate, and is at greater economic risk if oil supplies are disrupted.  That's now more than a theoretical possibility.

Northwest is Iraq, not Iran. And just about anybody could pay some group in Iraq to launch a few drones.

The US has been rattling sabers at Iran forever. For me, it is entirely possible that thus was a US attack designed to justify military intervention.

I don't much care who actually did the attack. I do care that it is of no matter to us in any way.

They wanna bomb and destroy each other? The only involvement we should have is arming BOTH sides in any dispute.

I personally think that our involvement should be limited to intel and an offer to replace any Saudi ordinance expended at cost.

Geez, Brad, why don't you just come out and say Exxon or Shell or any of the American oil companies did it in order to drive up oil and gas prices from domestic production.

As to dirty tricks by the US, those only seem to happen when a Democrat is in the White House. So, using the scientific method, add all the numbers in column A, sacrifice a small household goat for column B and, nah, the US didn't do it because TRUMP! and not the Hillarybeasty. If Hillary, then I would have suspected something along the lines of 'Missiles for Monica' or 'Libya' and 'This phone has been disconnected due to I am old and don't want to deal with an attack on US territory because it doesn't fit my agenda." (US embassies, well, all embassies work under the fiction that they are de-facto part of the country that they represent, and are sovereign soil. So Benghazi (and Tehran back in Carter's days) were attacks on the US of A, just as much as those people getting in a boat or a plane and coming here and attacking us directly on our soil over here, rather than over there.)

It does look like Iran. Or... ChiCom... Though the Red Chinese buy a lot of Saudi oil, so, yeah Iran.

As to what the US of A can do about it? Well, we and our allies (most likely... Israel, yes, Israel) can provide all the satellite and other spy stuff to make a valid guess or well based assumption (unless you actually can track said drones from point of origin, and can get sat pictures or drone pictures of the launching people's faces, it is all a well-based assumption) and give Saudi Arabia a reason to get very grumpy with Iran. Saudi Arabia can form a coalition of other like-minded oil producers in the area and curb-stomp various Iranian properties, and it will be okay because it's just one Middle East country hitting another.

And it will also give the Saudis a reason to really kick the Houtis in the teeth.

What Nuke Road Warrior said, doubled. Give them assistance at cost and weapons at a slight profit and stand back and clap.

Maybe even get the UN to write up a strongly worded resolution against Iran. That'll show them...


USA did it, like missiles to Pentagon or explosives in the WTC buildings, 4 gunmen at Kennedy assassination, fake moon landings, flat earth, Roswell Aliens are still at Area 51 and government is giving them citizens to experiment on, Hitler survived WWII... Give me a break...

Of all the above conspiracy theories, the only one possibly of merit is Hitler surviving WWII, and that's only a potential conspiracy because people were seeing Hitler everywhere...

I say the the Chinese help sort it out. In addition to buying lots of Saudi crude, the Chinese are cutting a deal to buy Iranian crude (with a financing method that avoids use of the U.S. dollar), investing in Iran in general, and basing 5,000 Chinese troops in Iran to protect those investments. Apparently the Iranians are desperate enough to allow the Chinese to do this, even though they kicked out that Russian airbase a year or so ago.

There still isn't enough actual detail to prove/disprove ANYTHING. But there are counters available, the question is, who will PAY for them and install/maintain them. Abqaiq is 'owned and run' by ARAMCO, and the loss of that oil production is costing the Saudi's about $300 million/day. They have already contacted folks to come in and fix it, but the second level 'protection' is not being addressed, at least openly. FWIW...

I'd like to see what a review of information from AWACS (always airborne there) says about it.

I'm with you, LL - we may never see the data, but I'll bet you anything we know EXACTLY where the offending drones/missiles/whatever came from.

And as far as OldNFO's 'protection' goes, if it was truly drones, there are effective jamming systems that can block drone comms in many if not most scenarios. And while they are $$$, so is the $300 MM / day loss at the pumps!

This was an Iranian response to sanctions. It's a protection racket and they just hurt the Saudis and sent a signal to the EU.

The recent spike in oil prices benefits the Russians, the Saudis and probably the Iranians. The Chinese, to the extent that they're customers for oil, won't like it. To the extent that China's recent investments in the Gulf put them on the oil supply side, a price spike is good short term but messing with distribution is bad.

Don't forget the China/Nork and Nork/Iran relationships. China just bought in on the Sunni side of the confrontation. Having influence or even power over both sides in a local fight makes China look like a budding hegemon, and hegemony is China's long term plan. It's probably a bit soon to look for Chinese carriers in the Persian Gulf, though.

Who cares to what happens to those beheading and crucifying Saudis!

Yes, The Houthis are responsible. For a long time they have been posting their modifications to equipment they had before the war. I am sure they are getting some help. Good for them. To hell with the Saudi's.

And, why is it that infiltration into S. Arabia to launch the attack is out of the question?

The Persian Gulf is heavily monitored and tracked, especially these days.

That would be quite the convoy trucking all those missiles several hundred kilometers in Saudi across a militarized and guarded border. Plus tanker trucks to refuel to get back to Yemen. I don't think they'd be hiking back. The Quds-1 missiles the Houthi showed off don't have anywhere near the range to reach, otherwise. But does anyone really believe the Houthi are developing sophisticated cruise missiles with such precision guidance packages to hit specific structures after flying 700 km. Iran may not be showing off that missile, but there's not much doubt that they were developed there.