Saved from the scrap heap of history - for now, at least


I was interested to learn that one of the ancient crowns of Ethiopia's emperors has been saved from looters.

After 21 years tucked away inside a Rotterdam flat, a priceless 18th century crown is finally being repatriated to Ethiopia with the help of a Dutch art detective. 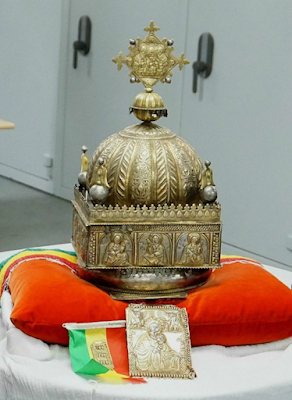 For more than two decades, the crown has been guarded by Dutch-Ethiopian national Sirak Asfaw in a secret location in his Netherlands home.

A former refugee, Sirak fled Ethiopia during the “Red Terror” purges in the 1970s. Over the ensuing years, he hosted Ethiopian pilots, diplomats and refugees as they passed through the city. He unexpectedly became the guardian of the crown in April 1998, after one of his guests left behind a suitcase.

Sirak said he "looked into the suitcase and saw something really amazing and I thought 'this is not right. This has been stolen. This should not be here. This belongs to Ethiopia'".

Sirak refused to let the unnamed suitcase owner regain possession and instead hid it from the regime that had allowed it to be stolen in the first place. “I knew if I gave it back, it would just disappear again”, he told AFP.

One of Ethiopia's most important religious artefacts, the crown is one of only 20 created and is one of the most valuable of those. Made of gilded copper, it features images of the Holy Trinity and Christ's disciples.

Sirak initially sought advice about what to do with the crown from fellow Ethiopians in an online forum, without revealing the specifics of his discovery. What followed was 21 years of pressure from his compatriots, who suspected what he possessed, and nightmares about the well-connected thieves who had smuggled it into Europe to begin with.

His guardianship finally concluded last year when Sirak contacted Arthur Brand, a Dutch art detective often described as the "Indiana Jones of the art world", for support. He felt that Prime Minister Abiy Ahmed taking office in Ethiopia signalled sufficient changes in the country and it was time for the crown to go home.

It's certainly a cultural artifact of immense importance, but Ethiopia is hardly the world's most stable country.  If it goes back there, I'm afraid it'll get ripped off again - and this time, the thieves will take rather better care of their loot until they can dispose of it.  So many ancient treasures have disappeared that way . . .

Looking at the crown (click the picture above for a larger view), I can't help wondering how (un)comfortable it must have been to wear it for extended periods.  I hope the Emperors of Ethiopia had strong neck muscles, and plenty of hair to serve as padding!

In the nineteenth century one could have made a similar argument about the Elgin marbles; weren't they better in London than in a Parthenon that the Greeks had the habit of using as a munitions dump?

In the twentieth century I was mildly in favor of restoring them to Greece. But in view of what recent migration is doing to Greece, and the iconoclastic habits of the migrants, I dunno... maybe they should be removed to some place that isn't being overrun by Islamic invaders. Even London doesn't seem like a safe haven any more!

Perhaps, for the benefit of posterity, we should culturally appropriate all the artifacts of Late Antiquity and put them in museums in the Midwest, where armies of country boys with deer rifles, pick-up trucks, and AR15s can be proud of them and protect them from hipsters and iconoclasts alike.

Interesting history of that piece. And not sure rehoming it is the best idea... Stability, as you've indicated, is NOT high in Ethiopia...

Fascinating. And we forget Axum/Ethiopia is perhaps our oldest classical civilization. At least I do.

I hope the crown returns and a Christian Monarch wears it.