Police in Raleigh, North Carolina, have done themselves no favors by enforcing a clearly, unquestionably unconstitutional order.  Here are a couple of excerpts from a Twitter thread discussing the matter. 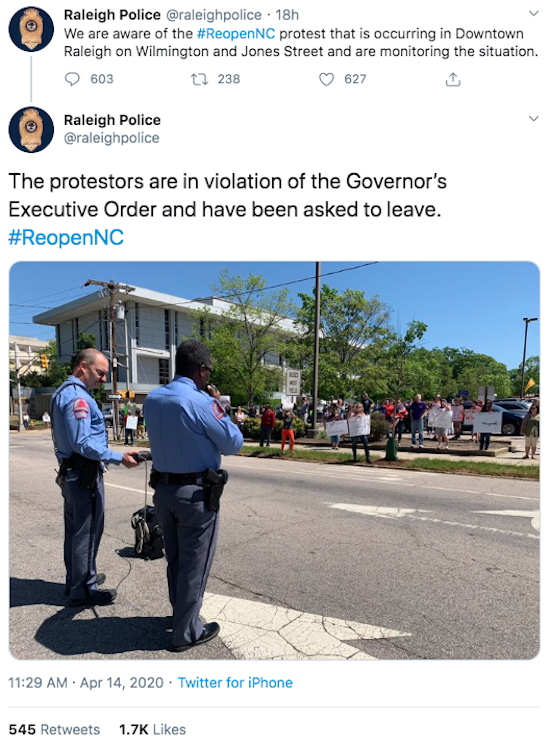 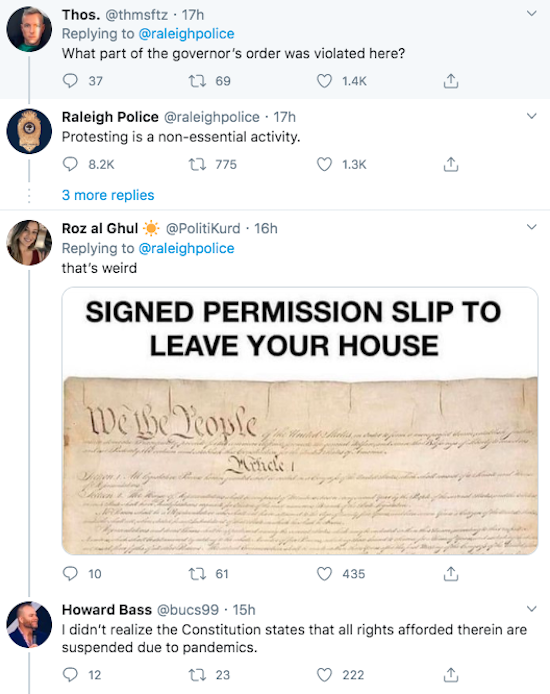 There's also the small matter of the Constitution of the State of North Carolina:  Article I (Declaration of Rights), Sections 5 and 7.  Italics are my emphasis.

Sec. 5. Allegiance to the United States.

Every citizen of this State owes paramount allegiance to the Constitution and government of the United States, and no law or ordinance of the State in contravention or subversion thereof can have any binding force.

All power of suspending laws or the execution of laws by any authority, without the consent of the representatives of the people, is injurious to their rights and shall not be exercised.


In other words, according to North Carolina's own Constitution, that State's governor had no authority to ban public protests, because such protests (i.e. the right to "peaceably assemble") are themselves protected by the First Amendment in the Bill of Rights of the Constitution of the United States.  What's more, there was no consent given to, and no prior authorization of, his order by "the representatives of the people".

That makes the actions of the Raleigh Police Department prima facie illegal and unconstitutional.  Raleigh PD, what happened to "protect and serve"?  You're protecting the bejeesus out of an illegal order!!!  In doing so, you're ignoring the Constitutional rights of your own citizens!

When I took the Federal law enforcement oath of office, I solemnly swore:

... that I will support and defend the Constitution of the United States against all enemies, foreign and domestic; that I will bear true faith and allegiance to the same; that I take this obligation freely, without any mental reservation or purpose of evasion; and that I will well and faithfully discharge the duties of the office on which I am about to enter. So help me God.


There was (and is) no expiration date on that oath.  It binds me still.  Did members of the Raleigh Police Department swear a similar oath, or make a similar promise?  If so, congratulations, officers.  You are now forsworn.

The same insanity is visible in Michigan, and California, and every other state where jackbooted thugs (in the guise of politicians and bureaucrats) are requiring their law enforcement agencies and officers to impose and enforce blatantly unconstitutional (and therefore illegal) orders.

The question is, what will happen to citizens who stand up for their Constitutional rights, and refuse to allow anyone to ride rough-shod over them?  I certainly will, if push comes to shove;  and I will not allow officers to treat me as a criminal when it is, in fact, their enforcement of unconstitutional orders and ordinances that is clearly and prima facie illegal.  Do I expect officers to acknowledge that, and back down?  I hope some will, but I'm sure many won't - because for many of them (clearly including Raleigh PD), to judge by their uncomplaining acceptance of such edicts, the Constitution is so much toilet paper.

That's what comes of ignoring and/or minimizing the importance of civics and US history in their education, both as children and as police candidates.  In particular, they've clearly never heard of Marbury v. Madison, where the Supreme Court of the United States ruled:

Certainly all those who have framed written constitutions contemplate them as forming the fundamental and paramount law of the nation, and consequently the theory of every such government must be, that an act of the legislature, repugnant to the constitution, is void.

Thus, the particular phraseology of the Constitution of the United States confirms and strengthens the principle, supposed to be essential to all written Constitutions, that a law repugnant to the Constitution is void, and that courts, as well as other departments, are bound by that instrument.


Marbury v. Madison therefore elevates the US Constitution, and that of North Carolina as well, over any edict by the Governor of that state, as well as any law passed by its legislature.  Would someone kindly inform Raleigh PD of that little fact?

Absolute power corrupts absolutely... sigh... And some of these people are getting a 'sniff' of power and running with it!

Banning protests is inherently and totally unconstitutional.
Anyone, governor or cop, saying otherwise, is a jack-booted tyrant.

Requiring protesters at any such protest to stay at least 6' apart from each other, and arresting any who don't is entirely legal, lawful, and constitutional, not to mention common sense rational. And ought to be enforced.

You may need some duct tape to keep your head from exploding if this is news to anyone.

There is a right way and a wrong way to do anything, and the Constitution is not a carte blanche nor a suicide pact, but rather a series of if/thens.

The anarchists should revise their nonsensical ramblings about "liberty" accordingly, unless they can also spell "responsibility".

We do not live in asinine Randian libertarianville, because people aren't perfect, nor perfectible. The Founders knew this, even if some idiots don't.

I remember the oath quite well...

I, _____, do solemnly swear (or affirm) that I will support and defend the Constitution of the United States against all enemies, foreign and domestic....

And no there was no expiration on that oath...

“Citizens may resist unlawful arrest to the point of taking an arresting officer's life if necessary.” Plummer v. State, 136 Ind. 306. This premise was upheld by the Supreme Court of the United States in the case: John Bad Elk v. U.S., 177 U.S. 529. The Court stated: “Where the officer is killed in the course of the disorder which naturally accompanies an attempted arrest that is resisted, the law looks with very different eyes upon the transaction, when the officer had the right to make the arrest, from what it does if the officer had no right. What may be murder in the first case might be nothing more than manslaughter in the other, or the facts might show that no offense had been committed.”

In Israel, which has been on and off with varying degrees of lockdown (and we are doing really well at managing the situation because of a desire to move fast and hard), to include extended time-spans when the instructions were to stay within 100 meters of the home, the list of acceptable reasons to leave your home always included political protests.

Protesters were asked to be responsible, wear masks, and maintain distance from one another.

Tucker's interview with Pennsylvania's govenor is an eye opener too. I'm sure the Democrats will amend their ways in time for the start of Ramadan(don't forget to vote Democratic!). Which is conveniently on the 23rd.

The cops are fundamentally unserious about the plague. They should be wearing masks if the major concern is public health.

They are not wearing masks, so obedience is obviously their prime concern.

Those who expect police and military to stand down in the face of unconstitutional orders will be sorely disappointed. Based on my observations and participation in governmental organizations{12 years USAF and almost 30 yrs state govt.) you will find a strong sorting for loyalty to the institution rather than an abstract like the constitution. Job security is another big draw for long term government employees and many will be loath to risk that. I'm sure some will stand down or even actively fight but the majority will comply with orders and will believe, or convince themselves, that you are the enemy of the people. There were many good men in the German army who fought and gave their lives to "protect the German people" not to advance Nazism.

Fred, I think that was the NJ governor, not that there's much difference between Democrat governors.

The only thing worse than a treasonous POS, is an Oathbreaker.

The Gov. of N.J. Told Tucker Carlson the Bill of Rights was "above his pay grade" when issuing his lockdown orders....it seems proof of knowledge of basic Civics and history should be required before allowing asshats to run for office... public execution for violating the Oath of Office might get their attention.... as well as thin the herd of miscreants... and I'm only half joking.