Sitting on my desk as I type these words is a KelTec P17 .22LR pistol.  The company has very generously made it available to me for testing, for which my thanks.  I promise I won't softball the review, either.  As most of you know, I've taught many disabled and/or handicapped shooters to use a handgun to defend themselves, including a number who can't handle the recoil of larger cartridges due to their physical limitations.  They rely on .22LR for defensive use, and on pistols like the P17;  so I'll be testing it to a pretty high standard - namely, would I trust my life to this gun?  If not, I'll say so, and tell you why.  We'll see.

The P17 has all the usual features, plus some that are unique at this price point:  its suggested retail price is only $199.  That's by far the cheapest .22LR pistol that I've seen in gun stores.  Kudos to KelTec for pulling out all the stops to make this a full-featured offering at an irresistible price. 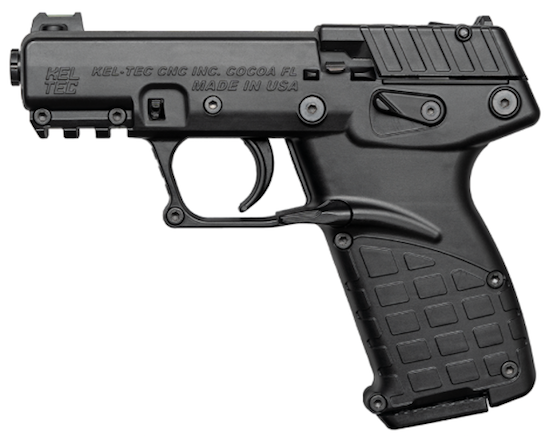 The pistol ships with a threaded muzzle and an adaptor for muzzle devices and/or a suppressor;  three (yes, three!) 16-round magazines (it holds 17 with one round in the chamber, hence its name of P17);  a wrench for removing the muzzle adaptor;  and a safety lock.  The sights are standard rear and green fiber-optic front.  I particularly like the fact that the green fiber-optic strand is embedded inside a traditional square-shaped front sight, so that if one wants to ignore the green dot and carefully line up the top of the front sight with the top of the 'ears' of the rear sight, that's easy to do.  Bonus points to KelTec for that. 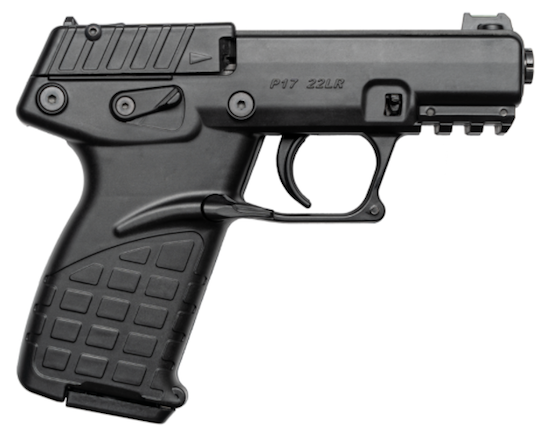 I've only fired one quick magazine through the P17 so far.  Accuracy was good, recoil no more than any other .22LR pistol (which is to say, minimal), and handling very easy.  The pistol's frame and grip are made of hard plastic, with a textured pattern on the grip.  It's nicely shaped;  a teensy bit too small for my large hands, but it's not a problem to adjust my grasp to compensate.  I think it should fit most shooters very comfortably.  At only 14 ounces fully loaded, the weight is easily managed.

I'm going to put this pistol through an extended test over the next few weeks, including (if I can line up the shooters, the range and the ammunition) shooting a thousand rounds in a day as a "torture test".  If the P17 lives up to its initial promise, and if it proves reliable, it's going to be a game-changer in the entry-level pistol market.  It's at least a hundred dollars cheaper than any comparable pistol I've seen.  It's light and easy-handling enough that the entire family can learn to shoot with it, and seventeen rounds of .22LR hollow-point ammunition is nothing to sneeze at if it comes to defensive use.  (If you doubt that, refer to my earlier article on .22LR as a defensive round, particularly the training routine I recommended there.  Once you've achieved that standard, you'll find the .22LR round to be eminently usable for personal security.)

What's more, .22LR ammunition is still relatively easy and affordable to buy, although it's getting more scarce by the day.  If you don't already have a stash of the stuff, now might be a very good time to buy a few hundred (or a few thousand) rounds to tide you over until the current ammo drought eases.  It's a very useful and low-cost way to keep your skills and training up to the mark.  (If you can afford to buy in bulk, my favorite online dealer, SGAmmo, still has plenty in stock.  I've already got mine, thank you very much!  No, SGAmmo isn't paying me or recompensing me in any way for recommending them.)

I'll have a more detailed review and shooting report in due course, but I'm initially favorably impressed by KelTec's P17.  The company may have a winner here.

I;m looking forward to your thoughts. I had not heard of this new pistol til reading this, but it looks like it would suit a niche I have. I'm particularly curious about trigger feel, and reliability with standard .22 ammunition as it gets dirtier.

Oh, interesting. And I've still got 8K rounds of .22LR in bulk pack from round one of the Great Obama Gun and AMmo Famine.

I've heard of this gun but never seen it in detail. I also wasn't aware of that phenomenal MSRP. I look forward to your review.

Given the street talk that KelTec functions as the advanced R&D division for the industry (their P32 and P3AT are the ancestors of the Ruger LCP and most plastic pocket pistols) we'll have to see if Ruger or someone else develops clones of this.

S&W makes a .22 compact which is near the dimensions of the M&P shield. IIRC it's about $350. I picked one up last year and I find it eats bulk .22 without a hiccup. I've had 0 failures to feed or fire with about 500-600 rounds of Remington thunderbolt and 2-300 other miscellaneous .22's. the trigger is a bit rough and I'm noticeably less accurate than with my S&W victory or S&W 22A. Additional thought, I wouldnt reccomend a ruger sp 101 in .22. even after a trip back to the factory I find the trigger pull too heavy for my banged up old hands and even with a speed loader I can change a semi auto magazine better.

I am a big fan and shooter of 22s, I own a Walther P22 and I like the pistol. It has always preformed with out trouble all types and manufacturers of 22 cal ammo. But, I have always had a problem with only a 10 round magazine, it seem the magazine could carry 12 or 13 cartilage I have contacted them and Walther doesn't seem interested in making a larger capacity magazine. This one review I am going to look forward too and ask my local gun shop about, I like the larger capacity and I have shot Kel Tec pistols and was mildly impressed with their performance.

I recently picked up a Taurus TX22, with 16 shot mags. It is a freaking laser, very accurate. The KT version interests me. I have KT 32 autos, and am well pleased with them. The KT22 interests me, and am looking forward to owners reviews.