Most of us know George Santayana's famous dictum:  "Those who do not remember the past are condemned to repeat it".  It's been used so often that it's become a cliché, but that doesn't make it any less true.  Those who lived through the previous "great ammo drought" of 2013, but failed to build up their stashes of ammunition afterwards in case of another one, are re-learning that lesson right now.  In less than a month, readily available ammunition supplies have gone from "plentiful" to "almost non-existent", and they're set fair to stay that way for months, perhaps years.

I note that online searches to buy ammunition have broken all records in the past few days.  Tyler Durden provides these graphs, among others, to illustrate the trend. 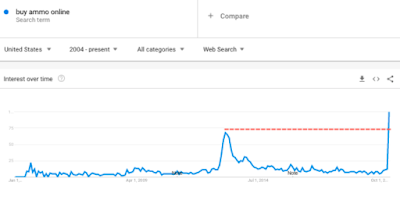 The second graph shows a red-line comparison between current events and the previous "drought" in 2013.  I daresay this one will continue just as long.  It took until 2015/16 before all sizes and brands of ammunition were freely available once more.  I expect this one will last until at least 2022/23, and perhaps longer, given that some ammunition makers may not survive the precipitous economic downturn we're experiencing at present.  For many of us, what we have now is going to have to last us for many years.

Last time around, I offered some suggestions as to how to cope with the shortage.  If you're interested, I urge you to re-read them, and apply them to our present situation - they're still valid.  In particular, given that this shortage is likely to last for at least a year and probably longer, consider alternatives to keep in training.  My recommendations about training and practice with BB or Airsoft firearms (written when the previous ammo drought was still at its height) are also still valid, and may be the only affordable way to put lots of rounds downrange for the foreseeable future.  I'm certainly going to increase my use of them, to conserve my ammo stash.

I highly recommend "swap meets" among friends and family to exchange ammunition and help each other keep going.  In particular, try to standardize on a few cartridges that meet one's needs, and don't try to keep every size, brand and bullet weight of ammo in stock for them.  For example, those who trust in the venerable .30-30 for hunting and protection are well served for any likely target within 200 yards, and don't need to worry about another long-range cartridge.  For self-defense handguns, pick one major cartridge like 9mm, .38 Special or .45 ACP, and take every opportunity to exchange other ammo supplies for rounds in one's chosen caliber.  Gun shows may offer a good opportunity to do this;  over the years, I've seen several sellers agree to exchange X rounds of this for Y rounds of that (at a profit to themselves, of course, but nevertheless, it's much more affordable to the buyer than having to pay out hard-earned cash).  However, oddball cartridges are unlikely to be in high demand.  Your prized 8mm Nambu stash probably won't buy you much in the way of 9mm. hollowpoints!

As a basic proposition, however, we need to "up our game" as far as personal defense and security are concerned.  Part of that is to make sure you have enough ammunition for the purpose, even if you have to beg, borrow and barter for it from your friends.  I fully expect we'll see an uptick in crime all over the country, with poorer inner-city areas driving a major upsurge near them;  and riots are by no means out of the question.  It behooves all of us to be on a higher state of alert, and ensure we're armed whenever and wherever that's legal.  I can't counsel anyone to break the law if it's not legal:  I'll simply remind you of the old Western saying that it's "better to be judged by twelve (i.e. members of a jury) than carried by six (i.e. pallbearers)".

As Commander Zero put it recently:

... disasters always wind up bringing out the worst in some people. Not all people, maybe not even the majority of people…but some people.

Remember the predicted paradigm of “when the government handouts stop there’ll be looting and burning in the streets?” I guarantee you that right now, in some major population centers, there are people who think they’re going to get checks from Uncle Sam for a couple thousand dollars over this ‘stimulus package’ nonsense. And if that doesn’t come to pass? Well..thats “my money” that I was “entitled to” and next thing you know you get crowds constructively expressing their dissatisfaction by breaking windows and burning cars.

Far fetched? Mmmmmaybe. But more likely the scum down the street in that crazy house are going to start rattling doorknobs at 3am and lock-checking parked cars since they know that people are going to be loading up on cash and other desirable items ‘just in case’. Garages that are unlocked will be visited at night. Items in your yard might start disappearing. And someone might be keeping an eye on your driveway to see when your car (and by extension, you) are and aren’t home. I suspect that the more rural your location the more likely that you might get the prepper-fiction-classic of strangers rolling up to your house and helping themselves.

I'm certainly going to be armed every single time I leave home;  and there's a reason why I've been experimenting with AR-15 pistols.  One of them, plus a few magazines in a load-bearing vest or simple chest harness, is probably going to be in my vehicle for any trip outside my home area.  Some of the places I go may be less hospitable in future than they've been in the past, and I have no ambitions to be another Reginald Denny.

If you think that another event like the 1992 Los Angeles riots can't erupt in almost any major US city (particularly in these troubled and unsettled times, with millions furloughed or unemployed and no schools operating to keep feral youth busy) . . . if you think that, I have this bridge in Brooklyn, NYC I'd like to sell you. Cash only, please, and in small bills.

We already have reports of in-duh-viduals checking residents doors at 3:00 AM. Woke up this morning and checked the 'net for the greater neighborhood, 3 separate reports, prep was caught on multiple cameras.

Will be talking to local watch group on additional measures that will be required. Hopefully we have some night owls...

We've already had repeats of the 1992 riots. Ferguson was one of them. Including non-'natives' being pulled out of their cars just because of lack of skin pigment. And shop owners defending their businesses with guns.

The interesting thing about this whole panic over the Wuhan ChiCom Corona virus panic, is that, reportedly, a significant number of 'anti-gun' leftists and other fellow travelers have begun to arm themselves, mainly due to their own leaders failing them (like, say, releasing prisoners and not arresting for any violation under murder.)

Fun times are coming, politically, even if Corona-Chan passes. There are a lot of awakened sheep out there (and anyone who thinks sheep can't be dangerous has never ever dealt with the little bastiges...)

Be safe out there!

I just added 700 rounds of 45 HydroshoK JHP. Monday and Tuesday were 357 mag days. Last week I loaded up every rifle case I had. Next week is 9mm, then 38spl, and then 10mm. Before this is over I should be able to supply the ammo needs of a third world nation.

Never forget the dry fire exercises as a way to keep in tune AND conserve ammo
Frankly, if you don't have gobs of the stuff already, you haven't been paying attention

I HAD a pretty good supply of ammo, but I added a new pistol (Zastava M57 -- the Yugoslavian version of the Soviet TT-33) and a new caliber: 7.62 Tokarev (7.62x25mm). Even that ammo is all gone! Fortunately, I have primers and powder and was able to buy brass direct from Starline. I slugged the bore -- .312 inches!! -- a went looking for the Lee 311-93-1R mould. I finally found one on eBay for a good price and grabbed it.

I'm looking forward to powder coating the bullets and seeing what this pistol can do! It feels good in the hand, and it's thin. It looks like a scaled-up Colt 1903 Pocket Hammerless.

I bought the gun just before the crisis began and had to wait until this week for funds to try to secure some ammo. It was crazy watching it sell and having to wait!