As I've mentioned before, due to some new medication I'm on as a result of my heart attack last November, my fiction writing has suffered.  I'm already on medication for other health conditions, and the new one, added to them, seems to be messing with the old muse.  It's very frustrating, but until I come off the new medication in the fourth quarter of the year, there's not much I can do about it.  (I'm working on a non-fiction writing project, about which I'll tell you more soon, because that doesn't seem to be a problem in the same way.)

This hiatus, of course, has affected my income.  One can't earn much money from writing when one isn't writing much!  That's a problem, and I'm looking for ways to address it.  One of them is to sell part of my firearms collection over the next few months.  Don't worry, I'll be keeping enough to meet my needs:  but our family finances take precedence over keeping more than those I really need.  I'm not complaining - in fact, I'm glad I have firearms to sell, to help keep the wolf from the door!

Last week I advertised a couple of AR-15 upper receivers on this blog, and was surprised by the strong interest shown by readers.  Both were sold within an hour of the article being published.  That being the case, I'll list more firearms and components for sale in these pages from time to time, to give my readers first shot at them (you should pardon the expression).  I'll list them all at or below market value, and also throw in some extras to make them better value than usual.  I'll take others to a local gun show later in the year. 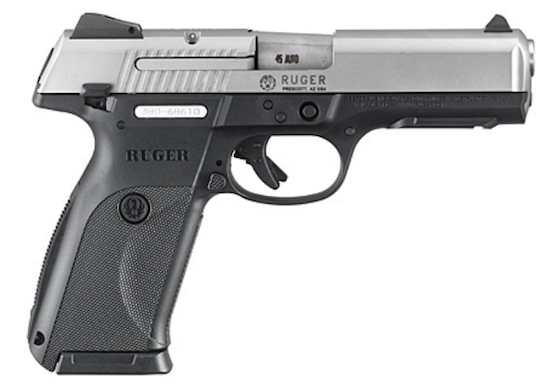 As far as the .45 ACP cartridge is concerned, I standardized on the SR45 pistol some years ago, at the recommendation of Ed Head, who's a former Border Patrol agent, former Operations Manager at Gunsite, and still an instructor there.  He thinks very highly of the SR45:  you can read his in-depth review of it here.  I find them among the softest-shooting .45 pistols I've ever handled.  They're so well designed from an ergonomic standpoint that the recoil really isn't a problem, unlike some other modern pistol designs that I've been unfortunate enough to try.

The SR45 shipped from the factory with two magazines, but I'm selling the gun with three, and I'll ship them all in a hard pistol case.  I'll price the pistols to sell quickly, at $300 apiece.  Shipping will be split between me and the buyer.  Of course, if they're sold outside Texas, or even inside Texas if we don't meet face-to-face, I'll have to send them to your FFL dealer, who'll conduct the usual background check, etc.  All relevant laws, rules and regulations apply.

With the current shortage of good defensive ammunition in mind, I can also supply a few boxes of high-grade hollow-points with the pistol if desired.  This will require a separate shipment, of course, as there are bureaucratic hoops to jump through to ship ammunition, and it'll cost a fair amount:  but, if you need ammo, we can figure it out.  If we meet face-to-face, of course, that'll make life easier, and save shipping costs.

If you're interested, send me an e-mail (my address is in my blog profile, which you'll find in the sidebar under the heading "About Me & Contact Info").  The first inquiry received will get first refusal, and so on until both guns are sold.  If I don't reply immediately, don't worry:  I may be busy, and unable to attend to e-mails at once.  You won't lose your place in line!

Labels: Business and Commerce, Firearms, Health, Me me me, Security, Self-Defense
Email ThisBlogThis!Share to TwitterShare to FacebookShare to Pinterest

Is there any possibility Dorothy would consider writing a followup book to Scaling the Rim? I was utterly fascinated with the premise and setting of the book and would very much enjoy knowing what happened to the characters and that world as time and terraforming went by.

Peter, I recently discovered your blog, and have really enjoyed rummaging around in your archived posts. Have you considered packaging (a lot!) of it by topic as ebooks? Your content is good! I think the editing needed would be light, especially if you retained the sequential nature of the posts. Just a thought. Where (generally) in Texas do you live? You probably have a lot of texas readers! Maybe edit the post above to add that?