It may sound crazy, but yes, there really were plans for a coal-powered jet fighter in Nazi Germany towards the end of the Second World War.  What's more, the engine was test-flown aboard a Dornier Do-17 bomber - and it worked!

The aircraft and its unconventional propulsion system were the brainchild of Dr. Alexander Lippisch.  He'd helped design the Messerschmitt Me 163 Komet rocket-propelled fighter, and was convinced that the delta wing held great promise for high-speed aircraft.  He proposed a delta-wing fighter known as the Lippisch P.13a, a drawing of which (courtesy of Wikipedia) is shown below. 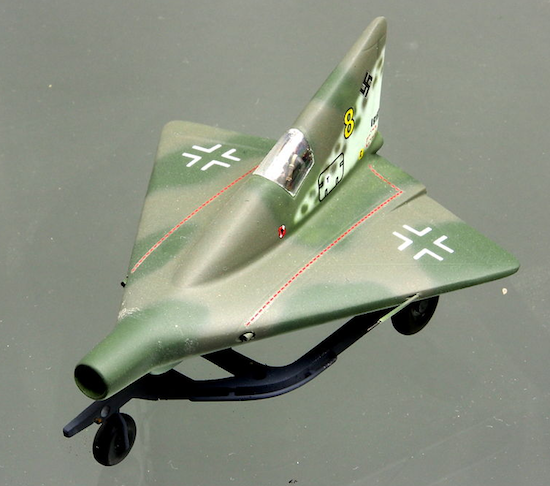 However, aircraft fuel was in very short supply at the time, and production facilities for jet engines were already overstrained.  The project therefore envisaged the use of a coal-fueled ramjet engine, described as follows.

Initially, it was proposed that a wire-mesh basket holding coal be mounted behind a nose air intake, protruding slightly into the airflow and ignited by a gas burner.

Following wind-tunnel testing of the ramjet and the coal basket, modifications were incorporated to provide more efficient combustion. The coal was to take the form of small granules instead of irregular lumps, to produce a controlled and even burn, and the basket was altered to a mesh drum revolving on a vertical axis at 60 rpm. A jet of flame from tanks of bottled gas would fire into the basket once the P.13a had reached operating speed (above 199 mph), whether by using a RATO unit or being towed.

The air passing through the ramjet would take the fumes from the burning coal towards the rear where they would mix under high pressure with clean air taken from a separate intake. The resulting mixture of gas would then be directed out through a rear nozzle to provide thrust. A burner and drum were built and tested successfully in Vienna by the design team before the end of the war.

Photographs exist of the Kronach Lorin test engine being flown aboard a Dornier Do 17 bomber.

They're included in this brief video clip about the P.13a project.

A glider prototype of the Lippisch P.13a was designed, but not completed before the war ended.  American occupying forces ordered the Lippisch team to complete the glider, which was then brought to the USA and successfully test-flown (without an engine, of course).  Lippisch himself also came to the USA under Operation Paperclip, and assisted with the development of delta wing technology for the USAF.  His influence can be seen in Convair's F-102 Delta Dagger and F-106 Delta Dart fighter aircraft, as well as the B-58 Hustler supersonic bomber.

However, the coal-fired ramjet idea died at the end of World War 2, and has never been resurrected.  I daresay a lot of pilots were relieved about that!

The position of Flugstoker was never fully defined.

Might the P.13a project had the code name 'Casey Jones'(?), asking for a friend.

I was fully expecting a 'coal-oil' powered jet. Not an actual 'chunks of coal,' albeit ground-up coal, powered engine.

Those wacky Germans, what next, a horse-powered tank?

There is a lot of energy in coal, and there is lots of coal around the world. Not as outlandish as some ideas the Nazi war machine came up with.

GE and Westinghouse did research on powdered coal dust fuel for turbine engines early in the 1900s, initially for ship use. A turbine will run on almost any fuel that you can get into the combustion chambers.
With coal dust the biggest issue was blade erosion and pitting, not the energy density of the fuel itself.

Coal Dust has a lot of "explosive" energy I believe the U.S.S. Maine can attest to the power of coal dust. Properly harnessed, there would have been a potential there and with Germany being desperate for anything as a fuel source and Coal actually beside the border of the Reich and not outside and as susceptible to the bombers of the Americans and the British like the Romanian Oil fields were.

What goes around comes around. In the fifties Railroads serving coal country in the Eastern US didn't want to alienate their best customers when they switched to diesel. They asked GE to develop a coal fired turbine locomotive. A prototype was actually built. The results, however, were the same as the earlier ship based turbines, erosion of the blades made the project unprofitable. Note that in the Western coal regions, the railroads owned most of the coal mines so they weren't worried about ticking off the mine owners when they switched to diesel.

To continue your dive down into the wackiness of German Aviation, go check out luft46.com. Neat site that has all sorts of 'could have been' and 'actually we did it' type of aircraft from the creative minds of Nazi Germany's aviation industry (and, yes, I never fully comprehended the whole 'coal power' portion of the P.13a.)

That's one thing I do like about the Nazis; they got sh_t done! In the big picture, we probably owe all of our aviation and space technology to the Germans. As Patton said, 'we conquered the wrong enemy'.