I've noticed that, in some of the photographs of rioters and activists demonstrating in our streets, they're shown wearing T-shirts with stylized likenesses of Che Guevara.  I don't think they have any idea what a psycopathic, merciless, murdering SOB he was.

The problem is, those of us who saw Che Guevara for what he was aren't helped when false "facts" are used to vilify him.  For example, I've found this image circulating on the Internet recently, and being used explicitly to condemn those rioters wearing his image on their T-shirts. 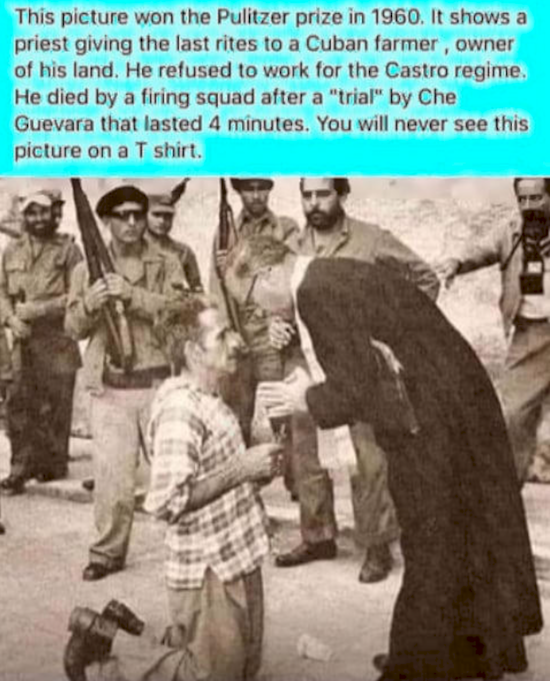 I confirmed that this image was, indeed, the winner of a Pulitzer Prize in 1960.  However, the details provided above are not correct.  The condemned man was not a farmer, but accused of war crimes (their nature was not specified) as a member of the Cuban armed forces;  his trial lasted two hours, not four minutes;  and he was convicted by a tribunal, not by Guevara personally.  The photographer commented on the image in an interview published in the St. Louis Post-Dispatch on May 3, 1960, shown below. 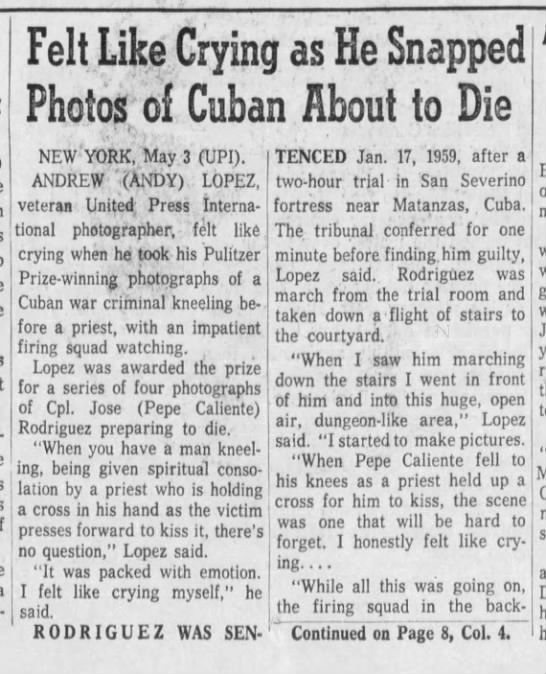 We do ourselves no favors by spreading lies as counter-propaganda.  When they can so easily be disproved, we discredit ourselves.

Propaganda aside, history confirms that Guevara was indeed a vicious, remorseless killer.  I won't pray for any man to burn in hell. I'm going to need far too much of God's mercy to cover my own sins to try to deny it to anyone else. Nevertheless, there's so much innocent blood on Guevara's hands that it's very hard to imagine him anywhere else in eternity . . .

and from what I've read at least, che hated black people specifically. wonder if blm/Antifa know that?

I suspected as such since Che! hated religion as much or more than blacks and mulattos.

So... What "war crimes" was the corporal accused of? Daring to fight back against the Communists and doing a good job of it? What authority do you cite to malign his memory by repeating the Communist allegation that he was a "war criminal"?

I can't find a damn thing where there's any non-Communist corroboration for war crime accusations, and that's after a couple of hours with Duck Duck Go and a translator app. The guy who presided at his trial is a notorious hack that later made quite a reputation as an author, but there is nothing to show what actual crime this man was accused of, and then convicted. The tribunal took several hours of testimony, and reached its verdict in less than a minute.

I think you owe his next of kin and memory an apology, because so far as I can tell, all he's guilty of is loyalty and being a good soldier.

@takirks: I did not say the corporal was guilty of war crimes: I have no way of knowing whether or not he was, and a Communist tribunal's verdict is hardly trustworthy as evidence. I said he was accused of war crimes. There's a difference.

I don't think an apology is needed, because I made no accusation. I merely reported the facts without making any judgment, legal, moral or otherwise.

Che shirts are fine. The star on the beret is a perfect center-mass aiming point.

Peter, you repeat the accusation without the slightest acknowledgement that it was a typical Communist show trial, and the reality is that what you are doing is telling their story. Che may not have been there, but there's nothing that I can find, anywhere, to point to this poor bastard being, y'know... Guilty as charged.

There is, however, should you bother to go looking for it, a later from the priest, in which you can find these passages:

"These were days of debauchery, overflowing with all the primitive instincts of the wild beast-man. It was the revolution of Fidel Castro's bearded men, which has settled on mountains of corpses from 1953 -Moncada Barracks- until today, with the consequent ruin of the enslaved homeland, destruction of families, institutions, the economy, and the freedom, of all the moral values ​​and heroic virtues of that country, worthy of better luck.

I met Corporal José Rodríguez in Jovellanos, a town in Matanzas, in my long years in that area, as his family, with seven children, who lived poorly in Jovellanos. He was a zealous guardian of the Army and the performer of duty in the missions entrusted to him. I never knew what they were accusing him of, because among that shouting the charges against him were not heard. I only heard when William Gálvez said: “Death penalty by shooting, and he will be shot right now. Bring me the garan (the garan was a rifle with a telescopic sight), I will kill him myself ”.

They pushed him down the stairs to the patio, where he fell into my arms, which were waiting for him, and when he saw me he fell to his knees saying: “Father, you are the only friend I have here. Everyone accuses me ... Oh, my children. What will become of them? Confess me, I am a Catholic. "

You feel all high and mighty, refuting a lie, but you're actually propagating a worse one, assassinating the character of one of the victims of Communism. You may think that your use of word "accused" covers your ass, but the rest of your words make it clear that you think this man was probably shot down like a dog with some justification, just because he worked for and was loyal to a regime you despise.

Show trial. Communist regime. Do the math--This was a murder done under the color of law.

"you think this man was probably shot down like a dog with some justification, just because he worked for and was loyal to a regime you despise."

Please don't put words in my mouth, or thoughts in my head. I said and meant nothing of the sort. You're projecting, in this case.

I repeat: I did not say the victim was guilty of anything, and given the nature of the tribunal in question, I very much doubt that he was. I said nothing about the Batista regime he served, because I know very little about it - I was born and raised about eight thousand miles from there on another continent. I simply stated the facts as they were presented to me in the sources I consulted, without embellishment. I didn't and do not "feel all high and mighty" about it - again, you project.

If that's not enough for you, I'm sorry, but that's the way it is. I can only suggest that you stop trying to tell other people what they're thinking and/or saying, and rather listen to them: and accept that sometimes your assumptions can be wrong.