The end of 74 years of maritime history


I was saddened to read that Maersk, the giant Danish shipping company, is to "retire" the Safmarine company name, and merge the latter's operations with its own.  It's owned Safmarine since 1999.

I grew up knowing Safmarine quite well.  The company was headquartered in Cape Town, South Africa, and its ships were well-known visitors to the "Tavern of the Seas", as the city was known.  Here's one of its first container vessels, the S.A. Winterberg, off the Cape coast.  Click the image for a larger view.

As a child, I remember the drama surrounding the wreck of Safmarine's S.A. Seafarer off Green Point in Cape Town in 1966.  The image below is courtesy of the linked article at the Safmarine Mariner blog.  The video is from a contemporary newsreel. 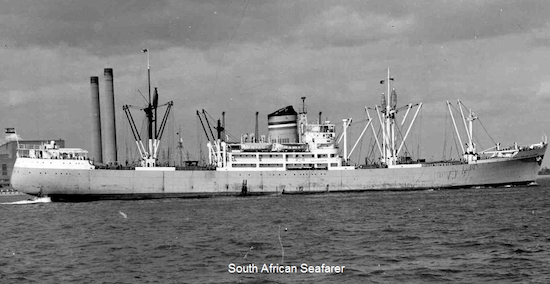 My father took me to Green Point to watch the rescue by Alouette III helicopters of the South African Air Force (SAAF).  We joined thousands of other Capetonians who thronged the waterfront to stare at the spectacle.  That evening the Green Point Lighthouse was stopped, and its light pointed directly at the wreck to aid in rescue efforts - something I've never heard of happening anywhere else.

I had some contact with Safmarine officers during part of my military service in the 1970's and 1980's.  The company served many African ports, despite the opprobrium in which South Africa was held at the time due to its internal policy of apartheid.  Inevitably, its ships and personnel (along with those of another local company, Unicorn Shipping) were co-opted by the South African government to infiltrate people and goods into "sensitive areas".  Safmarine sailors (or, possibly, military personnel carrying Safmarine papers - one could never be sure, and one did not ask questions about such things) were also seconded to some nondescript tramp steamers plying their trade in the eastern Mediterranean Sea, the Red Sea and some Indian Ocean ports.  Let's just say that those vessels were used to support some decidedly unconventional operations here and there!

Safmarine also operated an air freight subsidiary, Safair, which owned the world's largest private fleet of Lockheed L-100 Hercules aircraft (the civilian transport variant of the military C-130 Hercules).  The SAAF operated seven C-130's, and wanted more, but could not buy them thanks to international arms embargoes.  However, Safair could (and did) buy "civilian" freighter aircraft.  I understand that at one point, it had 17 L-100's on its books, often flown by SAAF personnel in civilian attire.  The SA Defense Force was its biggest customer, as can be seen below.  Despite Safair's highly visible presence at SAAF airfields, the USA didn't raise any overt objections to the use of such "civilian" aircraft as military transports. 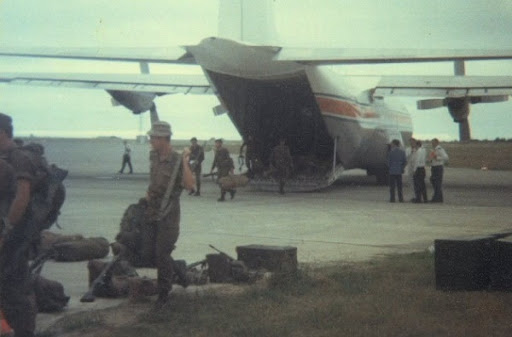 Safair continues in operation to this day as an independent corporate entity.  It put its former military experience to good use ferrying United Nations peacekeepers and other personnel around much of Africa during and since the 1990's.  I flew on its aircraft during aid operations from time to time.  It's ordered ten of the new-generation LM-100J, a civilian version of the C-130J Super Hercules, which will make it the world's largest operator of that variant, just like its predecessor.

After the end of apartheid and democratic elections in South Africa in 1994, Safmarine moved its headquarters to the Netherlands and continued operations.  Maersk bought the company in 1999, but continued to operate it as an independent entity, and its ships retained their "branding".  Blue Safmarine containers are visible from time to time on the container trains that criss-cross the United States. 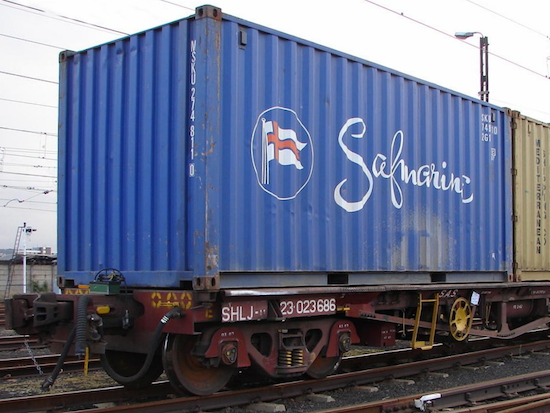 Indeed, one of those containers is currently in use as a storage shed for building materials at a construction site not a mile from my home.  Seeing it every time I pass there brings back some memories, I can tell you . . .

At any rate, Maersk has now decided to fully integrate Safmarine's operations into its own corporate structure, and do away with the latter's separate identity.  I'm sad to hear it, but not surprised, of course:  corporate efficiency has its own needs and demands.  Nevertheless, it's a little sad to see 74 years of maritime history vanish down the corporate plug-hole, so to speak.  I daresay many current and former South Africans will feel likewise.

Sad end to a once prosperous company. Glad Safair is continuing to carry on the 'tradition'!

I used to see their containers on railcars all the time in Long Beach.