I thought it might be helpful to explain the difference between the lute, the theorbo and the archlute, all mainstays of baroque and Renaissance music.

The lute is the "base instrument" for the other two.  Wikipedia defines the lute as "any plucked string instrument with a neck and a deep round back enclosing a hollow cavity, usually with a sound hole or opening in the body. It may be either fretted or unfretted ... The European lute and the modern Near-Eastern oud descend from a common ancestor via diverging evolutionary paths."

The theorbo was developed during the Baroque era to provide a stronger bass voice to the instrument, particularly for use in early opera and other genres.  Wikipedia notes that "A theorbo differs from a regular lute in that the theorbo has a much longer neck which extends beyond the regular fingerboard/neck and a second pegbox at the end of the extended neck. Low-register bass strings are added on the extended neck. This gives a theorbo a much wider range of pitches (notes) than a regular lute."

The archlute is a sort of mid-size compromise between the smaller lute and the larger theorbo.  Wikipedia calls it "Essentially a tenor lute with the theorbo's neck-extension".

To illustrate the differences in size, I found this image in several locations on the Internet.  I've no idea who owns the copyright for it, and I'll gladly provide that attribution if the owner cares to get in touch. 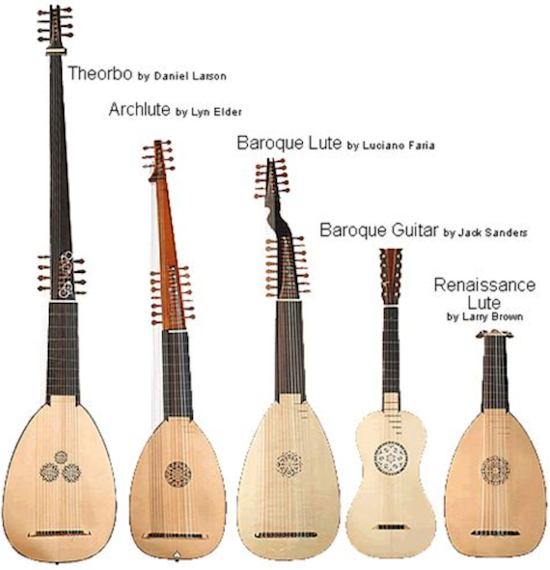 Of course, the instruments sound very similar, with stronger bass notes from the larger archlute and theorbo.  Here's a selection of videos of both being played.  The first two provide introductions to the instruments, after which there are several short pieces.  Enjoy!


Here's an interesting combination: an archlute and a salterio, a zither-type instrument.

Now for some theorbo pieces.

And here's one played by both archlute and theorbo, to highlight the aural and visual differences between the instruments.

Thanks, Peter. You are a Renaissance man.

I nearly bought a Theorbo, I was in an Instrument shop in London and they had one for sale for £180 which I thought was incredibly cheap. I played around with it and then had second thoughts because of threats from my wife about too many musical instruments cluttering up the house. Some time later I was watching the BBC on a Sunday morning and the Cambridge Early Music Orchestra was on with a young lady playing a Theorbo, it sounded really nice and I had third thoughts (I could sell or give away things I play less) and the following Saturday I went back to the same Instrument shop in London but needless to say, gone, (of course). I asked the salesman in the shop what happened to it and he said that it was so nice and such a bargain that he had bought it himself. I asked if he still had it and he said that was unable to do it justice and had sold it to a young lady from the Cambridge Early Music Orchestra. I think I missed that one.

Best Sunday Morning Music post ever! Thank you (for this and all your posts).

Whoops, sorry, I clicked something too soon.

This gentleman used to live in Mill Valley when I lived there. I got to know him and actually got to have a private concert or two at my home when I had him over for a meal. He developed a very unusual guitar/lute combination. He is world famous and such a wonderful human being. You could easily get lost in his music. I really think you may enjoy it.

Thanks for your blog. I may not always agree with you on certain subjects, yet you are such a good writer that I keep on coming back. If you ever come out west again, I would love to buy you a beer some day.

Another excellent example. The recital hall is as magnificent as the music.