As regular readers know, I've followed vehicle sales as a major bellwether of the country's economic health for some years.  Not too long ago, the expectation was that used car prices would show a massive decline, thanks to an oversupply of vehicles coming off lease, accompanied by so great an increase in the price of new vehicles that many people would no longer be able to afford them.

Over the past couple of months, that's changed.  Bloomberg notes:

Distortions from the official CPI report can be seen in used-car pricing, which showed their biggest monthly jump in August since 1969, but are still far short of the increases seen by used-car auctioneer, Manheim, an Atlanta-based firm that sells roughly 7 million vehicles a year. 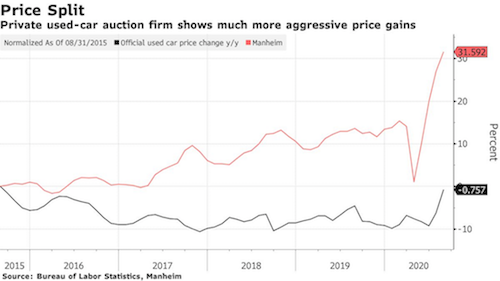 “The jump in used car and truck prices over the past two months might reflect the increased demand from city-dwellers who no longer are comfortable taking mass transit and others who have left the city and now need a vehicle,” said Kathy Bostjancic, economist at Oxford economics.


There's more at the link, including a larger version of the graph above.

That graph is really interesting.  Officially, used vehicle prices are very stable;  however, a leader in that field of business says they're anything but stable, having gone up by almost a third compared to the beginning of this year.  What's going on?

Ms. Bostjancic's theory is probably correct, as far as it goes.  Mass transit has been shown to be a hotpoint of infection for COVID-19, and it's also become a focal point for violence this summer, both criminal and politically motivated.  As a result, many commuters are no longer comfortable with using it.

Also, there have indeed been many relocations from cities to outlying suburbs and smaller towns for health and other reasons.  (I've seen figures suggesting that between half a million and one million households moved out of New York City this summer - and that's just one major metropolitan area.)  I know that in places like NYC, many residents haven't bothered to own cars for a long time, because it's difficult, inconvenient and expensive to keep one there (for example, monthly parking fees in a secure facility can range from $300 to $1,000 per month).  If they leave the city, and no longer have ready access to taxis or public transport, they need their own wheels.

However, there are several other factors that I think are playing a role.  They include:


There's also the undeniable fact that new vehicle prices are ridiculously high.  Added to that, there are greater restrictions on formerly-easy credit, as existing borrowers lose their jobs and lenders eye new applicants with increased wariness - they want to be as sure as possible that they can and will repay their loans.  That means many buyers can no longer aspire to new cars, and are forced to turn to the used vehicle market to find something affordable.  As always, greater demand pushes up prices.

Rental car companies, the largest buyers in the US car market, have also modified their purchase and resale patterns to adjust to the COVID-19 business environment.  Previously, they'd buy hundreds of thousands of new vehicles every year, and sell a similar number of older ones on the used car market.  When demand collapsed under the impact of the pandemic, some put a lot more of their vehicles up for sale to trim their fleets for the new business environment.  The Hertz bankruptcy in particular dumped hundreds of thousands of vehicles into the market.  That did initially depress prices;  but the surge in demand, due to factors outlined above, rapidly absorbed the new supply of used vehicles, after which prices rose again.  Meanwhile, the rental companies cut back drastically on their purchases of new vehicles, and kept older ones in service for longer (aided by the fact that their mileage wasn't increasing as fast as it usually did, thanks to lower demand from travelers).  That hurt new vehicle sales, but shielded the used car market from an ongoing glut in supply, keeping prices higher.

Finally, I'm informed that many people who leased cars at attractive monthly rates over the past few years suddenly found that it was harder for them to qualify for new lease deals at affordable financing costs, thanks to tighter credit requirements during the COVID-19 economic downturn.  However, they were often able to extend their existing leases for another year or two, usually at very attractive rates.  Thus, many vehicles that would have come on the market in normal circumstances no longer did so, further reducing supply.

Put all that together, and the supply-and-demand equation makes for greatly increased used vehicle prices.

How much has new car production been affected by shutdowns? If I remember right, many US factories slowed or stopped entirely for several weeks, so that would further restrict the bew car supply.

@Jonathan H: I don't think the factory shutdowns affected the supply of new cars all that much. The supply pipeline from factories to dealers was already over-full, with inventory of over 90 days in many cases. That inventory got drawn down to some extent while the factories were closed, but they weren't shut long enough to deplete it completely. I think the main factor affecting new car sales is simply that their price is so high as to be unaffordable to many.

Would you mind very much showing this same graph extending from Jan 2009, half a year prior to the Cash-For-Clunkers program

There's been a huge jump in RV sales. People have decided that's a safe way to travel longer distances, plus recreating outdoors is a relatively safe activity.

Peter - that's a good point; new cars are getting so pricey that more people are sticking with used cars. I'd be interested to see some recent data on average age of used cars and new. Last I heard, the average car in the US was 11 years old; I suspect that has gone up some.
Not only are new cars unaffordable to many, they don't make financial sense for those who CAN afford them. While I can afford a new car, I have never seriously looked at them since to me it doesn't make sense. My trend has been to buy low mileage cars 6 to 10 years old and then run them into the ground. My current car was only 4 years old when I bought it; while it s nice, I still feel it is hard to justify the cost.

I got a new car in 2016, a fully loaded "compact" for just over 20K, it was a nice machine that justified the price. Last year the dealer contacted me to look at maybe trading it in for a new one. I was hesitant but figured if they offered me a good trade in price maybe versus advances in technology. I get there and find out the same model the 2019 has gone up to 30k! it was insane.

There is also a movement, of which I am a part, that believes new vehicles are unnecessarily complex and too prone to expensive and eventually service-ending breakdowns of electronic parts. A couple of years ago I purchased a 2001 pickup at a reasonable price (in cash), and for the cost of 6-ish payments on a new truck, made all the repairs necessary and added what technology I wanted, not what a manufacturer wanted or what is being driven in by government regulations. It's paid for, the insurance is cheap and the taxes are cheaper. What's not to love?

I took my car to the dealer for service this last Saturday.

Part of my exit paperwork was an offer letter from the new car sales manager of $5000 for my car as a trade if I wanted to buy a new one. Never had that as part of my service papers before, so it seems they're kinda desperate to sell new ones.

Peter, Jonathan's right. I worked in sales for a Chevy/Buick dealer for 5+ years and am still working for them, part-time, but not in sales. (The dealer is very, very, ethical.)

GM had a strike AND the covid shut-down. At one time in July, my dealer had ONE new 1/2-T pickup available for sale. At the same time, there were ZERO 3/4T new pickups within 500 miles of our location.

Drive past any Chevy dealer and you'll see all sorts of "we have cars" optical illusions with cars lined up differently, far wider spacing, (etc.) Chrysler (FCA) lots have been pretty spare on new cars, too, since about 1st September.

Leasing--the first time--is attractive. But if you're around for long enough, you note that leasing another exact-identical vehicle ALWAYS includes a $75-$150/month price bump and sometimes a down-payment, too. So many people who leased cars are getting out of them.

Finally, we must distinguish between used junk and 'nice' used cars--which ARE in demand. Junk, not so much. Franchised dealers are not chasing junk at the auctions--they are chasing 'nice.' Same as their customers!! So yup. Prices are up.

You shoulda bought one in January, friend!!