Boys and their aviation toys, current and future


Here's a great video showing the US Navy's VAQ (electronic attack) squadrons and their operations over the past year.  Wikipedia notes:


The Growler is a great aircraft, but potential threats are already posing problems.  If the enemy can launch missiles from far outside its range, and take out its launching carrier, the Growler will have no choice but to land elsewhere or ditch in the sea.

The US Navy is already thinking about its potential replacement.

After nearly a decade of fits and starts, the Navy has quietly initiated work to develop its first new carrier-based fighter in almost 20 years, standing up a new program office and holding early discussions with industry, USNI News has learned.

The multi-billion-dollar effort to replace the F/A-18E/F Super Hornet and electronic attack EA-18G Growlers beginning in the 2030s is taking early steps to quickly develop a new manned fighter to extend the reach of the carrier air wing and bring new relevance to the Navy’s fleet of nuclear-powered aircraft carriers.

Despite the Navy sketching out a plan for its new fighter aircraft, Clark argued the service still needs to contend with an adversary’s ability to use lower-cost long-range missiles to target aircraft carriers.

“The idea of just continuing to build new manned aircraft with longer ranges to try to overcome the ability of a China or an Iran even or a Russia to shoot long-range missiles at the carrier, it’s sort of a losing game because the missiles are cheap,” he said. “The airplanes are expensive. So you’re in a bad cost exchange situation.”

Combining the manned fighter with unmanned systems could help the service confront this issue.

“That may be a way to get around this cost exchange problem, where maybe the airplane doesn’t need to fly as far,” Clark said.

“You know, the airplane could go a thousand miles, and it doesn’t matter if the enemy has a two-thousand-mile anti-ship ballistic missile because your manned airplane is not going to fly that whole distance. He’s going to stop at a thousand miles and then these unmanned systems go the rest of the way.”

I used to "indulge" in electronic warfare to some extent during my military service, not airborne like the Growlers, but ground- and ship-based.  We used to listen in to enemy transmissions, translate their messages, triangulate their positions, and direct counter-attacks based on electronic intelligence.  I used some of that background in my short story "Unintended Consequences", which appeared in the recent anthology "Trouble In The Wind". 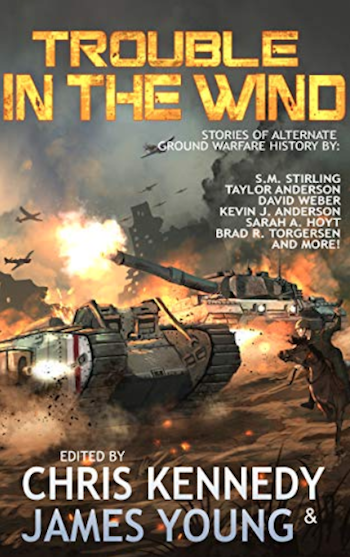 I probably wouldn't understand a lot of the computerized equipment in use today, but I daresay it does much the same thing - just much faster and better than our old steam-driven, manually operated stuff.

I wonder what the Growler equivalents of the mid-20th century will look like?  I won't be around to see them, of course, but the youngsters of today will.

Ah, a new aircraft, capable of long range on internal tanks, with the internal room for new tech, and a huge bomb and missile load, able to be used as a fleet fighter and as a naval and ground attack, capable of lifting anti-satellite and anti-missile missiles.

Like... the Super-Tomcat. Which was designed 20 years ago. And could have been flying and in large numbers by now. But the Navy sucked all the fun out of Naval aviation with the A-12.

I still think there's room for a carrier version of the A-10...

Beans said:
I still think there's room for a carrier version of the A-10...

Not so sure about the Bombcat in the modern environment with near peer combat the enhanced Tomcat will have a heck of a time getting close enough to most targets. With its huge engine intakes it probably has a HUGE radar cross section (like the F-15 with similar intakes). Realistically I suspect a Naval A-10 would have the same issue although its engines are intentionally masked by the aircraft originally for IR issues. Unfortunately IR missiles have gotten FAR more capable since the lat 6o's/early 70's when the A-10 went into service. Stealthy naval aircraft are hard (CF A-12) or ridiculously expensive (F-35C, F-35B) to create. I think for near peer conflict the choice might be swarms of expendable semi stealthy drones to overwhelm the target. Conversely its something our systems have to take into account. Throw enough stuff at a carrier and you'll overwhelm its CIWS and similar defenses. Ballistic missiles are less horrific than you'd think as the uprated Aegis hardware can cope with that (mostly) so drone swarm is the easy choice (and available to non peer folks too).

Good guys and girls, doing a hard job! BZ to them!

Yeah, I thought the Naval version of the F-35 was supposed to be the next gen aerial platform.

Aircraft carriers are so 20th century. There is no real reason to invest in these dinosaurs. Sub based hypersonic missile can take out of any these floating albatrosses in an instant.

Much like the AF needs the F-15X, the Navy needs a bomb truck. It's not stealthy, fast, or sexy, but it carries a lot of bombs and missiles that the F-35C can control.

SEAD of the future is likely more of the same. More powerful computers allow processing the signals faster, allowing more targeted response. This means they can use the limited RF power more efficiently. I strongly suspect that much of it will be drones controlled from the SEAD control craft, or back on the carrier. Or even back in the states, if the satellite links are still up.

WRT satellites, there is an interesting change in the industry. There is a lot of effort in making small less capable satellites that can be replaced cheaply and quickly. I expect to see the development of comms sats that are stored on the booster ready for near immediate launch and deployment to provide short term links in the asat environment.

I am unconvinced that this is an optional setup.
Electronic warfare is not, to my mind, a role that an attack aircraft should be modified for. It's much more screening and defense than assault.
Loiter time and range are paramount. Size (including wingspan) allows better antennas and more gear (also, more gas, but there are diminishing returns there). They're inherently equipped to jam radar-seeking missiles, so the main threat is likely to be heat seekers. The plane can't use its active sensors near the fleet without giving away the fleet's position, so I'm not at all sure I'd want it to be carrier based.

All this argues for a propeller-driven seaplane. A modernized Catalina PBY.