Sculptures that can kill your friends???


I have to admit, this is one of the weirder stories I've covered on this blog.  It's mostly in translation, too, which only makes it stranger.

Marcus Copper was a Finnish sculptor and artist.  Born in 1968, he died last year.  He seems to have had a weird fascination for sculptures and other "works of art" that were waaay out of the ordinary.  Here's his "Archangel of the Seven Seas" from 1995, currently in the collection of the Kiasma Museum of Contemporary Art, part of the Finnish National Gallery.  Click the image for a larger view. 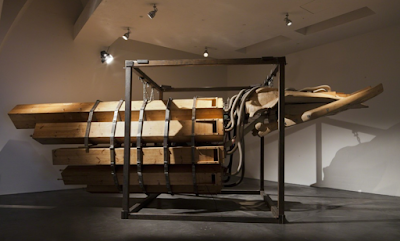 Those huge horizontal "posts" are actually organ pipes.  An article about the sculptor describes it as follows (original in Finnish:  this excerpt courtesy of Google Translate):

Copper’s best-known work is also his gentlest. Archangel of Seven Seas ... has built eight-meter-long organ pipes singing humpback whale. Copper bought the old organ of the Church of Kotka, twelve huge organ whistles, the largest of which was five and a half meters long. "The whistles were used to collect coins that come from the fear of the lord, and people gave more than coins."


Apparently, when played (using built-in electric motors and blowers), the work produces noises at a pitch and volume that make its surroundings shake.

Many of Copper's works were actively dangerous to the viewer.  For example, he built "Juggernaut", which Wired described as:

... an enormous steel ball that weighs as much as two cars. It has a motor, motion sensors, a juicy battery, and the mind of a psycho killer. It hunts you. If you don't jump aside, you'll be trampled under it. And it won't stop until the battery is dead.

Copper says he's not concerned about injuring people. Accidents can happen, but folks know what they're about to face. Juggernaut is stored behind a steel fence in Helsinki, and anybody who wants to play with the killer ball must unleash it first. The message is obvious: this experience might just take your life.

Copper's next project? "Bombs. I want to make bombs."


Copper died last year, but his obsession with destructive sculpture - particularly bombs - appears to be reaching out from the grave.  His "Sixpack of Instant Death" was sculpted in 1995.  It comprised six pieces, all somewhat deformed phallic shapes, that were designed to be linked together if the owners desired.  It's just emerged that they have a more sinister side to them.

ON TUESDAY, Helsinki police issued a surprising bulletin that initially gathered amused and surprised reactions on social media ... "Helsinki police are looking for parts of a work of art that may contain explosives - Three missing parts need to be found and rendered harmless", the title of the story said.

Sounds confusing. It became even more confusing when reading the bulletin revealed that it was a 25-year-old work.

The picture published in connection with the press release also clearly aroused interest. As Leevi Haapala, Kiasma's museum director, describes to Iltalehti, the sculptures in the six-part work were “ phallus-shaped”. 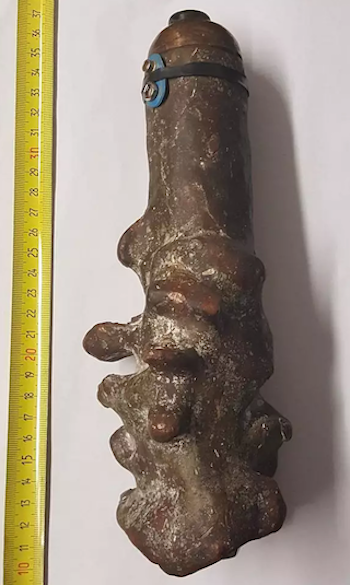 The [work], Sixpack of Instant Death, was made by sculptor Markus Copper , who died suddenly in his office in May 2019.

How has the Helsinki police now ended up chasing genital parts of a dangerous work that is 25 years old and the author himself has died?

Anniina Tourunen , a communications expert at the Helsinki Police , says that the search for parts of the old work that she understands has not started with a dangerous situation. None of the parts of Copper's work are known to have exploded.

Tourunen cannot very accurately explain why attention has been paid to the work right now.

“In August, the police received a contact regarding the matter, on the basis of which we set out to investigate the matter. It was not opened, who and how contacted about the [work], ”says Tourunen.

Copper divided his work, which was divided into six parts, specifically [among] his friends and colleagues.

"The idea was that when connected together, they would explode," Haapala told Iltalehti.

Sixpack of Instant Death is not a particularly significant work. Timo Valjakka says he has never seen it, but considers it a small-scale work that was not intended for the public.

"No museum would have included it in its exhibition because it had this dimension [opportunity to explode] all the time."

“I think this was a typical work by Mark,” Valjakka says.


There's more (courtesy of Google Translate) at the link.

You can read more about Mr. Copper's strange life in this 2009 article.  It's interesting, in a weird sort of way.

One has to wonder whether Mr. Copper warned his friends never to connect the six interlinkable "sculptures" when he distributed them.  With his somewhat strange outlook on life, he may have neglected to do so.

All I can say is, good luck to the Helsinki police.  If Mr. Copper's friends had the same sort of sense of humor (?) as he did, they may never find the rest of the set of six sculptures.  Perhaps a future generation of art-lovers (?) will rediscover their explosive nature the hard way!

Labels: Art, Boys and their toys, Danger, The Mind Boggles, Weird
Email ThisBlogThis!Share to TwitterShare to FacebookShare to Pinterest

It appears that Copper did a hang-up job.

I can't find a photo of the notorious Helsinki Killer Ball; it's only mentioned in a few places. Given the description, I concluded that it either never existed or has been permanently deactivated. Dropping it into the ocean comes to mind.

I have no idea how he kept the bulldog fed.

Seriously. If it's done by an adult but looks like it could be assembled or made by epileptic dyslexic toddlers on meth, well, it isn't 'Art' to me. It's junk.

Now, the graceful turn of a clipper bow, the beautiful curves in a custom barrel installation, even the gracesfullness of those grasshopper-like low production wells, that's art. Lots of art from early industrial revolution time.

I'm with Beans. Most "art" nowadays is just junk. (...including that guy this post is about.)

Near where I live, they replaced a perfectly good bronze statue of Lewis & Clark with a stupid looking "thing" that resembled a pair of twisted I-beams.

It's probably for the best, I suppose, because Lewis & Clark, not being woke enough, probably would have been toppled by now. And then again, with the new (((art))), if I need some scrap metal, I'll know where to get it.