You can say that again!!!


David Burge, known in the blogosphere as Iowahawk, puts the Supreme Court brouhaha in a nutshell on Twitter. 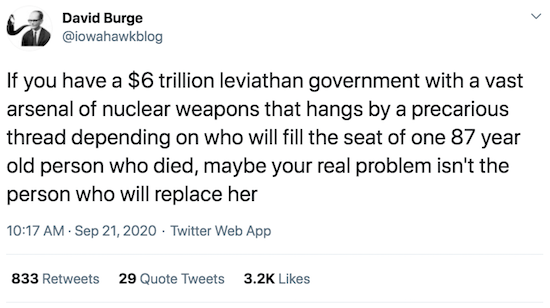 True words, those.  We have so many issues and problems to deal with:
yet people are losing their minds over who will be the next Justice of the Supreme Court?

Priorities.  It's all about priorities . . . but many of our benighted citizens appear to have no idea how to pick them.  Unfortunately, the same appears to apply to many of our politicians and almost all our national news media.

So much for leadership!

As long as the sheeple continue to allow the media to set their priorities for them, then they'll be in an uproar over the talking point(s) of the day. Reality be damned.

Since 80% of the lefts legal gains come from "Legislation by Litigation", it truly is critical for them. Had they done things legitimately through actual legislation they wouldn't have as much but there would be less risk of losing it.

The nation cannot tolerate having a monster like Trump make decisi Oh look, a squirrel.
.

This should be about priorities but it's really about what the media tells us it's about... Not right but that's how it is.
Hell of a world we built isn't it?

That's why we need to replace her and then use the panic of the Left to finally neuter, or at least "nerf", the Supreme Court. It is far too powerful and unaccountable. There are no checks on its power. Raz0rfist has made some good videos about it.