I have to note at the outset that this report does not come from any mainstream media:  but then, most of them seem to be actively denying that voter fraud is a problem.  However, National File provides what it claims is evidence that in at least one polling station in Houston, voter fraud is an organized reality.

Texas poll watcher Raymond T. Stewart, a retired police officer, submitted a sworn affidavit Thursday that was provided to the Harris County District Attorney’s Office. That affidavit, exclusively obtained by NATIONAL FILE, alleges that a Houston precinct judge and staff illegally used a stack of driver’s licenses in their possession to allow people to vote illegally in the 2020 election at a drive-through voting window created by the Coronavirus pandemic. Stewart’s affidavit and photos of the scheme are presented below. The acting precinct judge’s identity has been confirmed by the Harris County Clerk’s Office and insiders identify her as a Democrat.

Harris County, where Houston is located, is also the site where the Joe Biden campaign’s Texas political director Dallas Jones is accused of running an illegal ballot harvesting operation, according to two separate affidavits submitted to the Texas Supreme Court by former law enforcement officials ... Here is a photo from the scene of the stack of driver’s licenses. 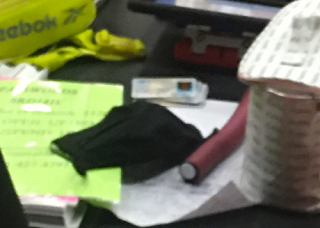 There's more at the link.  Go read all the details there.

I can't say whether or not this allegation is true;  but the evidence provided appears convincing to me.  In particular, a retired police officer is sure to be well aware of the consequences of filing a false affidavit.  That, plus the photographic evidence, is enough to make this a credible allegation as far as I'm concerned.

A possible fourth question might be, "Will the mainstream media follow up on the story, except to debunk it without any real investigation?"  However, I think we all know the answer to that one . . .

The answer to those four questions is, of course, a resounding "NO."

There then follows a fifth question: Will the populace(s) of Houston and/or Texas do anything about it? Also a resounding "NO."

Ultimately, everyone either supports it (gummint, left, media), or doesn't care enough about it to do anything to stop it (everyone else).

Dems have been committing voter fraud in Texas since it became a state. See LBJ's infamous election with dead voters. Or go back further to the massacre/lynchings of Gainsville in the 1860s.

All you have to do is read the mainstream news here in Houston. It's ALL Democrat slanted. Nothing ever good about Trump. And how does that tool Turner ever keep getting in as mayor? This city is crooked all the way down to the foundations.

Authorities in Harris County won't do squat about it, because the Harris County DA, Kim Ogg, is one of those Soros-funded leftist plants who will refuse to prosecute people on their side of the political fence. (And who also likes to no-bill violent criminals - see the case where a 41 year veteran HPD sergeant, due to retire at the end of the year, was killed by a turd the Ogg's office had decided not to charge, and given his gun back to.)

If anything is going to be done, it's up to the governor and state AG.

It will be up to the State and the Feds to do something about it, I don't see the county doing anything at all because it benefits THEM. the State needs to do it and make some messy noisy examples to restore faith in the electoral process and reminds people what happens when they try to get "cute" during an election what the penalties are. When people lose faith in the electoral process, then bad things start happening...like rebellion

What with this and the Project Veritas revelation of skulls being duggered here in Minneapolis, it is becoming markedly more difficult for the Demonrats & the MSM (BIRM) to claim that there's no electoral fraud going on. Not that it will keep them from trying . . .

Unless he submitted it to DPS or the Rangers, it will be 'lost' in the paperwork shuffle. Dammit

I recently received an absentee ballot application for my late father, sent by a Bloomberg funded organization. I checked with the county voter registration board, and confirmed my dad's registration was canceled. Even in deep red Idaho Bloomberg and company are spending money to mail out this crap.

This has been the norm in Houston/Harris County for a long time. I don't remember the exact election year, however about a decade ago when True the Vote started to investigate the Harris County election fruad and voter registration situation a majority of the voter registration documents were conveniently destroyed in a fire. The story seems to have disappeared very quickly.