The partisan dictatorship of our mainstream social media on public display

Yesterday we saw the astonishing spectacle of a major US newspaper breaking a very important story - with supporting evidence - about a Presidential candidate's clear and obvious participation in corruption . . . only to have major social media kill the story at every turn, and refuse to allow it to be discussed.  You couldn't possibly ask for clearer evidence of their bias and lack of objectivity.  In fact, Twitter went so far as to block the account of the newspaper concerned, and of the White House press secretary, who referenced the report.  Twitter's boss later admitted that was "unacceptable without providing a clear message as to why it was taking the action" - but those accounts are apparently still blocked as I write these words, with the only posts showing being more than half a day old.  So much for a non-apology.

I'll let the always incisive Tucker Carlson summarize what happened, and why it's so important.  If the embedded video won't play, you can watch it here, or read a written version at this Fox News report.  Here's the critical core of what he has to say.

They prevented the public from reading the news. They didn't apologize for doing this. They didn't bother to make up reasonable-sounding justifications for it. They just did it, exactly as the Chinese government does. These are monopolies. They have all the power, you have none. They don't have to care about what you think and they don't.

This was mass censorship on a scale that America has never experienced in 245 years, and it's a threat to all of us. Democracies only function when there is a free exchange of information between citizens. We no longer have that. 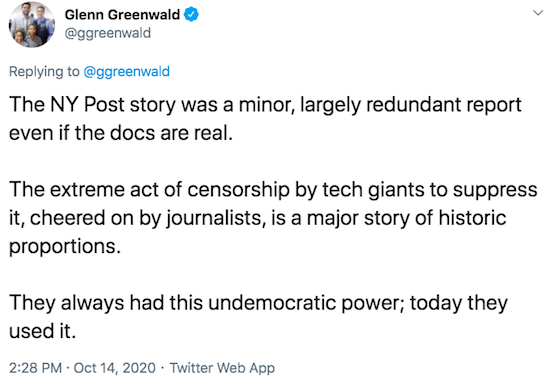 There are obvious conclusions to be drawn - so obvious, they hardly need to be stated - but many people absolutely refuse to draw them, because they support such partisan censorship.  Therefore, let's lay it out in unmistakeable terms.

Please remind your friends and acquaintances of that, and please circulate the news of this blatant censorship to all of them.  It needs to go viral - but it won't, thanks to this censorship, unless all of us spread the word.

When Trump wins(Hey I'm an optimist), I see a reckoning after the election, I see the Dept of Justice going after twatter and farcebook and the other Big Tech giants like a monopoly kinda like MaBell treating it like a monopoly forcing it to either break up or substantially change. President Trump will be going after vengeance at this point, and with a 2nd term, he ain't going to care and the GOP has to know that they have to fix the problem so the party has a chance in 2024.

The only way the elephants have a chance in 2024 is if Trump goes "Sherman" on all the traitors. Otherwise we are still all in for CW # 2, aka "Deep Poop".