Frank Boardman "Pistol Pete" Eaton was a legend in the Old West, and well into the Modern West era too.  He was a scout, Indian fighter, lawman and cowboy.  He wrote about his life in his autobiography, "Pistol Pete, Veteran Of The Old West". 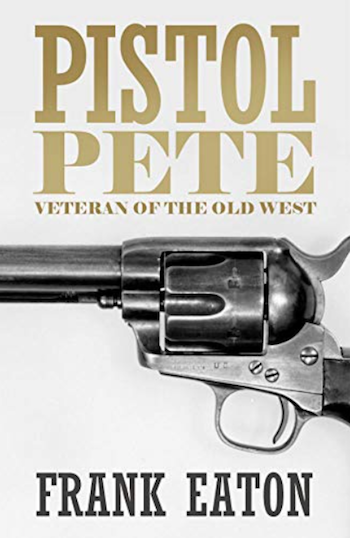 Among his adventures was the time when ranch owners in the Texas Panhandle decided to put a stop to widespread rustling in the area.  Here's what happened.

There was a Cattlemen’s Convention at Mobeetie, Texas, and Colonel Charles Goodnight and Uncle Nick Eaton were up there for two days. When they came back they got all hands together and told them to clean their thirty-thirties, wrap them in a blanket with two boxes of shells and put them into the chuck wagon, get their best ponies and get ready to ride to town.

We didn’t know what was going on and for that matter didn’t care. We rode along with the chuck wagon and camped on the outskirts of Mobeetie. We were a disappointed bunch of cowboys, though, when we got strict orders to stay in camp. But when we saw Nick Eaton’s chuck wagon and riders, and outfits from some of the other ranches, come in and camp near us we began to wonder what was up.

After a while Colonel Goodnight’s foreman, a man named Pennington, told us to come on — so we got on our ponies and started for town.

We were joined by boys from the other outfits, and we made a hard-boiled bunch of riders. The foreman of each outfit took his riders up to the place where the cattlemen were holding their meeting. We left our horses at the hitch rack, filed into the room, lined up against the wall and listened.

Colonel Goodnight was talking and he said something like this: “We have enough evidence against them to hang every damn one of them and that is what is going to happen right away. I have eighteen good riders, every one a fighting man. Every one has a thirty-thirty, besides his belt guns, and we have lost all the cattle we are going to lose. Now we will clear the room and not let anyone in that is not a cowpuncher. Each foreman must vouch for all his men. We will fix up our plans and give the boys the names of the men we want and they can bring them in. Then we will hold court and give them justice. Now, all you owners keep your seats; and everybody else must go. A foreman will be at each door to see that everyone who comes in belongs in. This is a cattlemen’s meeting for the purpose of stopping cow thieves; no one but cattlemen and their hands will be allowed. Pennington, who is my foreman, will vouch for the men he has with him. Nick Eaton, here, and his boys are ready. You other men are as ready as you ever will be so let’s clear out all but the cattlemen and get to work. Clear the room, boys.”

The boys got busy and started to clear the room. There were a lot of town loafers and shady characters who wanted to stay and hear what was coming off, but they were all put out and two guards were stationed at each door and window. The foremen stood at the doors and let in only their own men.

After they were all settled down, Nick Eaton and Deaf Smith, another big cattle owner, went out and the others just sat around and waited for them to come back. When they did come back they were laughing; they told the other cattlemen their plan was working and they all laughed. Then Colonel Goodnight said, “Pennington, take the boys down and line them up against the wall in the saloon and let them stand there awhile and wait for orders. Now, they will try to get you to drink; but I don’t want any damn one of you to take a drink of any kind, so tell them you haven’t got time now but you will later. Now don’t talk to anyone, just go in and line up with your backs against the wall and stand there until we send for you.”

It was a very quiet town just then. There were over fifty armed cowboys in the different groups and they went into every saloon and dance hall in town and nobody wanted to start any trouble with them as they stood silently waiting for orders. They wondered what the orders would be and there were a good many others in the town that would have liked to know. In that brief time there were eighteen men who left town and went to the hills to camp until they could learn how things were going to turn out. After we had stood there for about half an hour the foreman came in and said, “Come on, boys, they are going to wait until morning and make a clean sweep of the whole shebang. Let’s get back to camp.”

We all filed out and went to the chuck wagon where the cook had supper ready and the foreman said, “Stay in camp, boys; don’t anyone go to town tonight. We have them on the run and in the morning we will finish up and h’ist a few drinks and go back home.”

Pennington went over and joined the bosses and they all rode into town and went around asking for certain men who they knew had left town. Then, a little later, when they saw a man ride out of town, they knew he was taking word to the suspects who had left for the hills earlier in the day, so they let him go — for that was part of the game.

The next morning Pennington told Rolla, Jack and me to get our Tides and go with him and the others. When we reached the first saloon we saw the other foremen, with small squads of cowboys, going into the other saloons and dance halls and wondered what it meant.

Pennington went up to the barkeeper and asked for a man by name. The barkeeper said the man had not been in that morning and he guessed he was down at his boarding place. Pennington answered that we had just come from there and he was not there. Then he turned to us and said, “Come on, boys, we will find him if we have to go all over hell with a fine-tooth comb.” We turned and walked out and went over to where the boys from the other outfits had gathered. Pretty soon we saw another horseman ride out of town, in the direction of the hills, hell bent for leather. We stood around a little while longer; then the foreman said, “All right, boys, go wet your whistle but don’t take too much. If anyone wants to know what we are going to do, tell him you don’t know but that you have orders to wait and then maybe take a ride in the hills. Now, don’t drink too much and don’t let any man kick you into a fight.”

The boys scattered and the foremen and the ranchers had a celebration of their own laughing over the trick they had played.

Of the eighteen men that left town that night only three ever came back. They were very careful for a long time not to lay a rope on a calf and when they did they were promptly hung by the Vigilantes.

Late the next morning the different outfits started for home. They had broken the cow-stealing ring without firing a single shot, and it stayed that way for a long time.

They still laugh, down there in Texas, about Colonel Goodnight’s bluff.

That's one way to do it - and, given the reputation of the ranchers in that area, if that hadn't worked, I daresay ropes and trees would have been invoked on the spot as well!

Reputations meant something back in those days, because they were 'earned'...

As Walter Brennan said in The Guns of Will Sonnett: "No brag, just fact"