"Far as I'm concerned, it's Officially 'Game On' from here on out"

That's the conclusion of The Intrepid Reporter in a hard-hitting, no-holds-barred article about the current violence in our streets.  He uses a lot of profanity (like many veterans), so unless you can live with that, you won't want to read the original post.  This being a family-friendly blog, I've taken the liberty of redacting the profanity to publish these excerpts from his article.

Seems that it's now apparent in the Hallowed Halls our Lords and Betters are completely unhinged.  ****ing Full Stop, Strong Message(s) Follows.

First, Over the weekend, the National Guard came under fire from a drive by.  No serious hits, BUT: 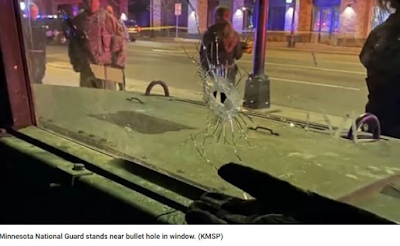 ... what the hell was going on when the gangbangers did their ****?  These kids in the NG... must not be one combat vet among 'em.  No one shot back, no one caught them, and they got away clean, which means there's going to be a lot more instances of this ****, except if the Gangbangers decide they want to snatch some DotMil firepower... It's obvious that the Rules of Engagement are ****ed to the max.

And then, in The District of Criminals, where we still have 5000 ****ing troops garrisoning the town, seems that Blac Block went ape this weekend.  BLM and BB went after a gorgeous fountain in Dupont Circle was attacked and defaced.  ****ing assholes. They threw molotovs and defaced it with their usual ****ing commie slogans.

Not one. single. cop. or. guardsman. even tried to stop them.

It was on orders from on High

I keep telling myself that "things can't be that ****ed up"

My own personal cognitive dissonance Aye?

But apparently they are

I mean just how in the hell does Queen Maxine ... Waters get away with z.e.r.o. consequences for literally going to Minneapolis, riling up the crowd (incite many riots you ****?) and then our National Guard folks get shot at on American Soil????

We are rapidly devolving into Iraq, the Sudan, Rwanda... you name it, we're sliding down that route.  Until one of these Court Jesters and/or, preferably "and" gets their noggin blown open, and what little cranial matter gets thrown on a wall in a Jackson Pollack-esque decorative manner, then this **** will keep happening.

It's a zero-sum game

As long as We the People allow these spoiled brats to get away with this ****, with no consequences, and no jail time, nevermind the ultimate punishment then they'll keep on keepin' on as Joe Dirt would say.

People are ****ing sick and tired.  The more you push, the harder you push, it's going to be very sudden and very violent and there's no stopping it once it does go all "Wild Wild West"... No idea what that trigger will be, but man, It's Coming Soon

Friends, I don't want to agree with his assessment . . . but I'm a combat veteran too, albeit one who wore a different uniform and fought my wars on a different continent.  I have to agree with him.  I'm not blind;  neither am I deaf or dumb.  I listen to the voices I hear around me, I talk to friends who are themselves veterans, and I share views with many who are not veterans, but who are patriotic Americans faithful to the vision of the Founding Fathers.  I hear many of them echoing his sentiments.

I think the extremist progressive left has no idea of the immense enmity they're storing up for themselves in the hearts and souls of normal Americans.  They appear to believe that they can have it all their own way:  that they can intimidate the populace into letting them get away with (literally) murder, and many lesser crimes.  They may even be right, in the "blue cities" dominated by their pet politicians.  However, that doesn't apply to many other localities, both urban and rural.  If the urban terrorists currently plaguing Minneapolis and scaring the locals were to try their antics here in northern Texas, I think many of them would be going home in body bags - and it wouldn't be the police who put them there.  It would be local citizens of all races, who'd take one look at their shenanigans and reach for their rifles with a snort of "Not here, you don't!"  (Their language would be a lot more like The Intrepid Reporter's than mine!)  I have friends in the local black community, and believe me, their reactions to BLM, Antifa and the so-called Black Bloc are, shall we say, anything but supportive.

When I heard Maxine Waters whipping up racial hatred, resentment and violence in Minneapolis last week, I was outraged.  Why she hasn't already been charged with misconduct by its Ethics Committee is a stain on the honor of the House of Representatives - to add to the many self-inflicted stains that body and its members have already inflicted on themselves.  She probably won't be charged, of course.  The left looks after its own.  Nevertheless, her antics are a disgrace, and there needs to be an appropriate response to them - and to her.  I suspect there will be, if not now, then in due course.

Nor is she alone in her mendacity.  The same lies are evident in many left-wing progressive organizations.  To name just one current example, Miguel points out the falsehoods and errors in an ACLU fisking of that state's Combating Public Disorder Bill.  They're openly lying to the people of Florida, and they're utterly shameless about it.  How can anyone in his right mind support an organization like that?

I've said on several previous occasions - most recently just last week - that we're sliding down the slippery slope that leads to a fourth-generation-conflict civil war.  It seems The Intrepid Reporter sees things the same way;  and I know we're far from alone in recognizing the signs of the times.  The gaping divide between the progressive left and racial extremists on the one hand, and "normal Americans" on the other, is yawning wider than ever.  I don't know that it's feasible to bridge it any longer.

Be warned, friends, and be prepared.

What was missing is the fear that any NG that shoots back would be the next Officer Chauvin...

Just waiting for the hammer to fall...

concur, and add that only when men feel they have nothing to lose or will lose everything anyway, do they take up arms in civil war. look at arab spring. atrocity after atrocity but nothing until the price of daily bread exceeded daily wages. coming to America folks, and hell's coming with it.

“The most terrifying force of death comes from the hands of ‘Men who wanted to be left Alone’.
They try, so very hard to mind their own business and provide for themselves and those they love.
They resist every impulse to fight back, knowing the forced and permanent change of life that will come from it.
They know the moment they fight back, the lives as they have lived them, are over.
The moment the ‘Men who wanted to be left Alone’ are forced to fight back, it is a small form of suicide. They are literally killing off who they used to be.
Which is why, when forced to take up violence, these ‘Men who wanted to be left Alone’, fight with unholy vengeance against those who murdered their former lives.
They fight with raw hate, and a drive that cannot be fathomed by those who are merely play-acting at politics and terror.
TRUE TERROR will arrive at the Left’s door, and they will cry, scream, and beg for mercy, but it will fall upon deaf ears.”

Dad taught me to not start fights. He also taught me how to finish the ones somebody else started.

In a way, I'm hoping Chauvin is acquitted, because that may prove to be the trigger that sets things off so that we have the opportunity to eliminate these Leftists from our society and regain some degree of sanity.

Thanks for the H/T Peter. Yeah, I -am- raw of language, foul of temperament these days, but, as you said, Who wouldn't? The left is pushing the metaphoric 'lightswitch' from "Be Cool" to "Kill Them All". and I concur that they know not what they do. It's because the morons in charge have been LETTING them off with wrist slaps and finger waggling: "You've been a naughty naughty naughty ze/zhir!!!!" that they continue down a road that not only will lead to their collective annihilation, but that of their families. 4th and 5th Gen War is something they have NO CONCEPT of.

My kid finished up 12 years in the NG last spring. Thank God.

They're going to keep it up until it goes weapons free.

And as you said, They have no idea what's going to happen, and no conception of the demons they've conjured.

At the end of the day, when the dust settles, there'll be dead innocents everywhere.

The race hustlers will slink off with their money, leaving scores of their people, probably mostly innocent, dead.

I suspect they know exactly what they are doing. They don't need to come to northern Texas or rural Michigan. They already have a good hold on both coasts and other major urban areas. With control over the national media they can create whatever message they want and folks will give away their birthright for the illusion of safety or normalcy.

"When I heard Maxine Waters whipping up racial hatred, resentment and violence in Minneapolis last week, I was outraged. Why she hasn't already been charged with misconduct by its Ethics Committee is a stain on the honor of the House of Representatives -" She's a Democrat. As I keep saying, I don't KNOW if the media is/are a wholly-owned subsidiary of the Dem Party, or if it's the other way round, but it's OBVIOUS that they are in CAHOOTS.


Also, I despise, detest, and totally distrust the media. Wormtongues, one and all.

We are VERY glad we moved out of Maryland a year ago. As it turned out, we moved to the state with the most sane government in the land. Maybe the flood waters will rise to engulf us here but it will drown a lot of other areas first.

At least, that's the plan.

There have been members in Congress and in the White House who have thrown way too many White Phosphorus grenades with pins pulled into the standing pools of gasoline that are everywhere now.

And none of these a$$hats have paid for any of their inflammatory speech ever, nor will they until 'comes the revolution,' sadly.

Mad Maxine should have been arrested, tried and thrown under a Supermax for what she's pushed, for years.

Trump asking people to settle down and act like citizens? Inflammatory, gets him shampeached for a second time. (Can you really impeach a non-sitting president? If so, can we go after Carter, Clinton, Obama? Please?)

4 disgruntled old farts just blowing off steam at a Waffle House? Inflammatory and dangerous (well, especially since one of them was working for the Feds) and so arrest and throw them under the prison.

Al Sharpton, Jesse Jackson and others literally and actually stirring up riots over fabricated incidents that get people injured, killed and property totally destroyed? Not illegal, apparently.

Shooting or running over, in self defense, a rioter inflamed by the evil people above? That's illegal. Except in Florida now, thank you Florida Legistlature and Governor DeSantis.