An armored vehicle for the Mall Ninja!

I'm sure many readers have heard the expression "Mall Ninja" used to describe security guards at the average suburban shopping mall.  You can read the (side-splittingly funny) account of the original Mall Ninja here.  It's as dumb and stupid today as when user "Gecko45" wrote it, and thousands of American shooters have laughed at his obliviot fantasies since then.

Be that as it may, it looks like one of Gecko45's fantasies may yet be fulfilled.  Tata Motors in India has announced what they're calling the MBPV, for "Micro Bullet-Proof Vehicle", intended for just such a scenario.

This is not your average combat vehicle. With one look at it you can immediately tell it's unique, and heck, even cute. It is small and boxy, but don't let its eccentric look fool you. The Tata Motors Micro Bullet-Proof Vehicle (MBPV) is a combat vehicle designed to tackle indoor conflict. 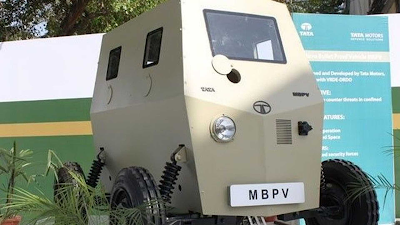 Tata Motors ... designed the MBPV as a protected mobility solution that assists their forces in limited indoor locations such as malls, railway stations, airport interiors and other small locations. This armored vehicle features protective bullet-resistant panels, compact dimensions and a high power-to-weight ratio for agility. The four wheels of the MBPV can be steered enabling it to be very maneuverable in confined spaces. The MBPV can even climb stairs in case it needs to handle business on the upper levels of a building.

The vehicle's kooky appearance doesn't really evoke any fear right off the bat until its armaments come to light. The MBPV has firing ports incorporated in various locations for retaliatory action and the surrounding armored windows allow for crucial all-around visibility. Did we mention it can quietly creep up on you? The MBPV is powered by an electric motor that allows it to be relatively silent upon arrival. This combat vehicle might be small in size, but carries impressive capabilities.

Tata Motors believes there's a realistic need for this kind of vehicle because it has seen multiple situations where insurgents have been holed up inside confined premises and their commando units have not had efficient solutions.

I don't know about the shopping mall.  Given the images of riots, unrest and looting in far too many American cities over the past year or more, I'm thinking this might become suitable transportation for the average urban family!  How long, do you think, before some of our famous notorious demonic skilled redneck mechanics produce a home-grown version?

I see this more a a result of a specific experience: the 2008 Mumbai Terror Attacks and the resulting siege of the Taj Palace luxury hotel.
The police lacked the resources to effectively pin the terrorists down and evacuate the civilians that had gone to ground in their hotel rooms. The siege lasted from the 26th to the 29th.

I'd forgotten the MallNinja saga! Thanks for the laugh!

I have the same problem with ALL of these types of vehicles... How the hell do you AIM out of those low firing ports???

Looks like a half-dozen husky fellows could push that thing right over on its side if the probable maximum of two crew were distracted or even a little slow to deploy weapons.

As to redneck ingenuity, see the late, lamented Marvin Heemeyer and his little Tonka toy.

I'd like to see that take an RPG or similar anti vehicle round.

@Old NFO: I presume you'd have a laser sight on your weapon's barrel. Put the dot on the target, which you can see through the window, and ventilate it. You could also use an infrared laser and NVG's.

It makes a degree of sense, in light of certain events that happened in India and Kenya - wherein armed groups attacked commercial areas. There isn't much call for them here, however. Not like that will stop companies from trying to acquire them.

"How long, do you think, before some of our famous notorious demonic skilled redneck mechanics produce a home-grown version?"

It's already happened, way back in 2004. Look up Marvin Heemeyer and his "Killdozer" in Granby Colorado.

Ever hear the tale of the Kill-Dozer, Peter?

Just...no.
"The enemy gets a vote" isn't just a trite saying.
It's ground truth.

One balloon filled with paint, and it's blind on one side.
One-two guys pushing, and it's on it's side.
One bottle filled with gasoline and dish soap, with a handy lit rag around the neck, and that thing is a flaming coffin, which makes burials more convenient for the permanent extra crispy occupants.

And that's before we get to American Grafitti 1960's-era levels of shenanigans using nothing more complicated than a tow chain to disable and immobilize it.
It can climb stairs?
How does than work after someone helpfully puts some used motor oil or grease down?

And if someone upends it onto the sole access door, the occupants are bait in a jar.

This thing is the same level of intellect that concocted Gecko 45's Tactical Wheelbarrow, and not quite as bright as Winne the Pooh using balloons to mount an air assault raid on a hunny tree.

At least is doesn't have the crew ejection handles that many of our Army armored vehicles have (external fire extinguisher release, with oxygen displacing suppression media). Of course, a bottle of aqua ammonia would have the same effect, as well as being able to pass through the anti-chemical-agent filters.
Cute though.
John in Indy

"Bullet proof", eh? For what value of "bullet"?

It seems obvious that Molotov cocktails are expedient Standard counter measures against armor of any type. Main battle tanks moving rapidly of the battlefield would be hard to hit with a cocktail but this thing should be way too easy to target even by the throwing challenged members of our society (calling Dr Fauci?)

A roll of duct tape and some rope would make that jam or a water balloon full of oil would make it immobile and a terrible cooker.