Inflation watch, and a warning from Michael Yon

First, since "a picture is worth a thousand words", here's inflation as reflected in the price of gold.  (Click any image for a larger view.) 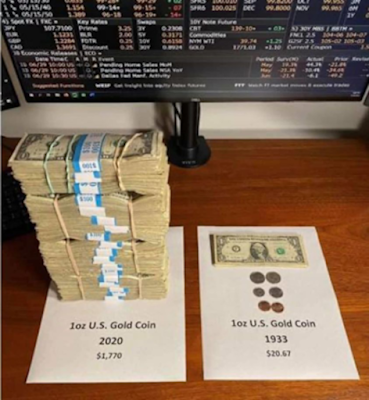 Next, the price of Campbell's Condensed Tomato Soup from 1898 to date.  It also speaks volumes. 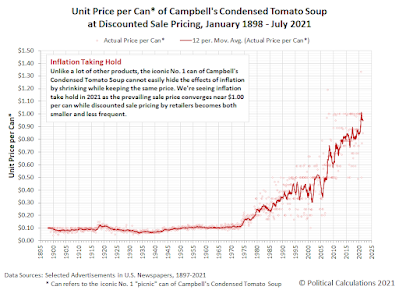 The White House is starting to wake up to inflationary reality.  According to the Daily Mail, it's "quietly met with economists fearing inflation could last YEARS - not months - despite publicly saying it would be a 'temporary bottleneck' after the largest surge in prices in 13 years".

Wolf Richter points out that consumers are going along with the inflationary spiral, and not resisting it - at least in the auto sector.  Bold, underlined text is my emphasis.

These enormous profits on a per-vehicle basis document the explosion in prices that dealers were able to get their customers to agree to pay; and they blew away the input cost increases that dealers faced.

And the fact that customers threw decades of training into the wind and just laid down and paid whatever when they didn’t even have to buy a vehicle, and could have just waited a year or two until this craziness blows over, shows just how broken the vehicle market is, and how broken ultimately the customers are. With this kind of attitude that price doesn’t matter, inflation has become ingrained in the mindset.

If enough customers had refused to pay those prices, and just kept driving what they already had, sales would have dropped, and inventories would have built up until dealers start cutting prices and making deals. But that didn’t happen. Customers eagerly played along with the worst outbreak of inflation in four decades.

Finally, Michael Yon has some urgent advice that I fully endorse.  He's not just worried about inflation alone, of course - we saw another warning from him earlier this year - but these preparations serve just as well to protect us in a high-inflation environment.

Food prices will continue to rise — 90 percent chance, according to me. Remember that I started beating this drum hard in January 2020 and this proved true just months later.

HIGHLY suggest you stock up on all things you need to stay home for extended periods.

Do NOT tell others you are prepping.

I use a Berkey water-filter for home, and a Katadyn pocket filter for travel. Prices for both shot up since I started warning in January 2020.

Remember that when water goes out, toilets do not work.

Everyone’s conditions are different. Some live in condos in Manhattan. Others live in distant areas with clear mountain streams, or on islands, in deserts, and so on. Everyone has their own circumstance. Everyone needs food and water.

Stock up on needed medications. I warned of this in January 2020. Much of our pharmaceuticals come from China. After I warned, CCP threatened to cut off America ... Stock up.

Not end of times. Just stormy weather ahead. We will get through. But being prepared makes things much easier.

With all these warning signs flashing everywhere we look, nobody will be able to excuse themselves because "I didn't know!"  It's as plain as the nose on your face.  If we don't prepare, and are caught short, we have only ourselves to blame.  Preparations don't have to involve luxuries, or things we can't afford.  A diet of rice and beans is undoubtedly boring, but it's cheap, and nutritious enough to keep us alive, no matter how tired we may get of it.  You can pile up a year's supply of rice and beans for a family of four for under $200 right now, if you buy in bulk from big-box stores.  In a few months' time, who knows what it'll cost - or whether it'll be available.

A years worth of beans and rice... how much is that?
Vegies too? 24 cans to a case of canned vegies...

Here's one man's take on that question: https://grandpappy.org/hfoodaff.htm

That was a good site, thanks.

One thing that popped up suddenly on my radar this year; my septic system backed up. The system hadn't been pumped in five years the last time I had it done, but it was still perfectly healthy. The backup came just shy of two years after that pumping. The reason; too many solids in the tank. The reason for that; a son moving back home last year; one who uses an inordinate amount of TP. If you're on septic, you may want to increase the frequency of pumping so as not to get caught on the short side when the SHTF. This is especially true if you anticipate one or more relatives hunkering down with you in the coming storm. Also, I suggest keeping a stock of enzymatic supplements on hand for the tank to keep it humming... If you've never had a backup, take it from me; it'll pretty much incapacitate your house until it's fixed! YOU.DON'T.WANT.THIS!

Life on the home front is TOUGH when the crap doesn't roll down hill like it's supposed to!

Referencing the Campbell's soup inflation graph. Here in Canada it's been over $1 a can for awhile. Last time I saw it on sale was over a year ago if not more(possibly pre-pandemic) when it went down to fifty cents a can. Store would drop a skid of them in flats and people would take two or more of their choice. Haven't seen that happen for a long time. And I should know since my late mother would keep an eye and ear out and have me grab a flat for her use.

How much of the price of gold is inflation (or lack of faith in fiat), and how much is the fact that gold is an industrial metal and in higher demand?

"How much of the price of gold is inflation (or lack of faith in fiat), and how much is the fact that gold is an industrial metal and in higher demand?"

--interesting question, but academic. Unless you don't think there has been and continues to be inflation? The Fed Reserve's stated goal is to steal 2% of the value of your life's work, and any savings you have through inflation, and the real number by any measure is far higher than that. So take it as a given, and let someone else count angels dancing on pins while you ACT on the knowledge. In other words, don't get distracted by minutia.

--do the math. Lot's of places to look online, prepping is quite a popular topic, and most of the info out there won't hurt you if you look at it with common sense. The slicker the site, and the more advertising, the harder I'd apply my common sense filter.

For example, what would a meal look like for your family under less than ideal conditions? For me, wife, and two elementary school age kids, breakfast can be one bowl cereal, or a couple of eggs, or hash browns, or grits, or oatmeal, toast, meat, each. Do the math, get a couple of cases of hash browns, some quaker oats, some spam or if you have the cash, canned bacon, maybe corned beef hash in a can, or whatever you like. Multiply by 365.

For lunch I figure we'll eat any leftovers, soup, or skip.

You don't need to get there all at once, but if you haven't started, or don't have much money, you should concentrate on survival- rice. You can add stuff to rice. It's how most of the world eats after all.

Some preppers talk about how many calories they have stored, but I prefer to think in terms of meals.

One month of dinners is basically two flats of canned goods, some cans of chicken, some pouches of meat, a couple of canned hams. Add 3 bags of rice stored in buckets, a couple of buckets of pasta bought on sale, and maybe a bucket of tortilla mix, and you easily extend that.

I prefer my beans pre-cooked in cans, so I don't store bulk dry beans.

If you think you'll have time and fuel to cook bread, then store a bucket of wheat flour.

It isn't hard, just extend what you already cook.

If you never cook, you have a bigger issue and a higher hill to climb, but there are resources out there. Lots of people have been looking at these issues for a long time.

Bear in mind too that everyone can grow some basic foods. There are great videos out there on how to grow potatoes in 5 gallon buckets (food of course). If you've got a little space-- garage, basement w grow lights, you can crank out potatoes year round quite easily. Potatoes are #1 survival food as they not only have lots of carbs and calories and versatile but richer in vitamin C than oranges. Sorry, rice! Plus, if you absolutely had to eat them raw, you could. Not so rice.

Also recommend ramen noodles. Yes, the cheap, plastic wrapped bundles. Cheap as hell and each pack gives you boocoo calories, boocoo carbs, and boocoo fat (fat is something that we forget is absolutely necessary to brain function etc..). It's a decent source of iron and potassium but really you're just using an incredibly cheap source of fat and calories to blend with some kind of protein. Hey, and different flavors of the rainbow too so live it up!