If you use a lot of flour, pasta or cooking oil, take note

There are growing reports that the wheat harvest this year is likely to be severely affected by drought.  Instapundit linked to this report from a farmer and agronomist on Facebook:

PSA for anyone who eats in the US or Canada. This year's wheat harvest is shaping up as dreadful. Durum, used for pasta and bread flour, looks to be the worst in at least 60 years. Soft White Winter wheat, used for pastry flour, and Hard Red Winter [all-purpose] are facing the worst harvests since the 1988 drought.

This is a good time to stock up and hoard, since the news is not widely known. Pasta keeps just about forever and a doubling in price is not inconceivable. Same with assorted flours if you bake at home, except flours should be stored in a freezer to prevent damage from Indian Meal Moth and other bugs. Bread also freezes quite well, and will do just fine for at least a year, probably two.

Canola oil is also likely to see a price jump, as the crops across Alberta and Saskatchewan have also been clobbered. It also keeps well for years.

A report from Reuters confirms the above forecast.

Hot, dry weather has swept through western North America, contributing to hundreds of deaths, igniting wildfires and roiling canola and wheat markets in one of the world's most fertile regions. Canada's Prairies produce more canola, used to make vegetable oil and animal feed, than any other global region.

The result of the heat wave is a potential worst-case scenario where … canola may reach only 20% of last year's yield.

Worries about heat damage have driven canola futures to a new high for harvest delivery and taken spring wheat futures to the highest in eight years.

Spring wheat, another major Canadian export, is also struggling on the Prairies and in North Dakota, the biggest U.S. producer of the crop. In that state, 50% of spring wheat is in poor or very poor condition as of July 4, according to the North Dakota Wheat Commission.

Drought conditions are widespread and unrelenting.  Consider the current drought map as of July 6 (click the image for a larger view, and click the link for a newer version). 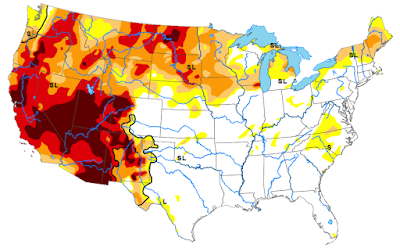 Drought has already scorched much of the U.S. West, prompting farmers in California to leave fields fallow and triggering water and energy rationing in several states.

Crop development in the central U.S. is highly watched this year as grain and oilseed prices hover around the highest in a nearly a decade and global supplies tighten.

About 41% of Iowa, the nation's top corn producer and No. 2 soybean state, was under severe drought as of Tuesday, up from less than 10% a week earlier, according to the weekly U.S. drought monitor published on Thursday.

Cooler weather this weekend and some rain through next week will bring some relief to crops in the western Corn Belt, although far northern areas may see less rain.

"Montana, Nebraska, Minnesota and even northern Iowa would still be a little shortchanged, especially the Dakotas," Keeney said.

Conditions in North Dakota, the top producer of high-protein spring wheat that is used in bread and pizza dough, remained dire, with about two-thirds of the state under extreme or exceptional drought, the most severe categories.

Of course, this will affect many crops, not just wheat or canola.  California is the primary supplier of many root and leaf vegetables eaten in the USA, and it's being severely affected by drought.

What's more, this is going to have a knock-on effect far beyond our borders.  Many nations rely on imported crops from North America to supply their needs.  If that source dries up (literally), they'll have to find what they need (or alternative foodstuffs) elsewhere - and that will mean short supplies worldwide, including of products that we need in the USA and import from other countries.  Think "vicious circle" and you won't be far wrong.

If you bake a lot, or make your own bread, or rely on pasta as a staple dish, you might want to stock up while the going's good.  Think of it as expanding your emergency food reserve.  This time, fortunately, the shortage is predictable, and you have a little time to prepare for it.  As for fresh fruit and vegetables, if supply shortages come along, we'll just have to make do with what we can get.  Expect frozen and canned fruits and vegetables to become harder to get and more expensive.

As for canola and other cooking oils, I suggest this is also a good time to stock up.  I'd try for at least six months' worth in your pantry, if not more.  I don't think it'll dry up completely, but I suspect it'll get considerably more expensive, which will drive up the cost of alternative products as well.

(In case you think that stocking up in advance of shortages is somehow selfish or "hoarding", note that Popeyes has been stockpiling chicken for months.  It's neither selfish nor "hoarding" - it's sound common sense, and makes business sense too.)

I bought some emergency food packages and water purification tabs a few months ago. Looks like it's time to buy more.

And yeah, the citizens of Cali should probably find a relatively clean river or stream while they still can.

The West was apparently ravaged by extreme drought about 600-700 years ago. This drove the Ancestral Pueblan people from the Four Corners area of present day Utah, Colorado, Arizona and New Mexico. Happened once and is happening again. Just normal climate change.

Hm. A neighbor suggested a while back that I could use wheat for a winter cover crop in the vegetable patch.
Maybe I should do that. Nobody tell Commissar Wickard....

Thanks for the heads-up, Peter. I'll put flour, pasta, and maybe some rice on the "extended" shopping list.

A five gallon food grade bucket holds 25 pounds of flour. A bag that size is surprisingly cheap. A bucket or two is easy to keep in the basement to serve your ready use canister in the kitchen.

As to flour: yes, those mealworms are annoying.

Yes, thank you for giving out this advisory. I just might try to bake more this next winter. Will have to re-learn how to do it properly from scratch.

My aunt and uncle planted mostly canola and soybeans this year, decreasing their wheat and corn crops. But right now they have about a thousand acres that they will be plowing under because of the drought. "Knee high by the 4th of July" is more like ankle high right now. My cousin is debating if he wants to move some of his cattle down south or just sell them or slaughter them. It's pretty bad right now.