"The Elder Scrolls V:  Skyrim" is one of the most popular and widely-played video games of all time.  It's sold about 25 million copies worldwide since its launch in late 2011, and is still widely enjoyed.  (If you put that into the context of the film or book markets, that would make Skyrim an absolute blockbuster movie, or a bestselling book, both on the level of The Lord of the Rings in both markets.)

The music soundtrack for Skyrim has also been widely praised. 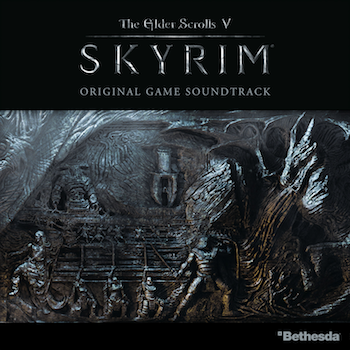 The team employed Jeremy Soule to compose the music for Skyrim, who previously worked on Morrowind and Oblivion. The game's main theme "Dragonborn" was recorded with a choir of over 30 people singing in the fictional dragon language. Creative director Todd Howard envisioned the theme for Skyrim as The Elder Scrolls theme sung by a choir of barbarians. This became a reality when the idea was passed by Soule, who recorded the 30-man choir and layered three separate recordings to create the effect of 90 voices.

Bethesda released four audio CDs along with the game on November 11, 2011.

Here's the soundtrack for Skyrim, in digital format.  If you click through to its page on YouTube, each track is named, and its duration given.  Also, if you look at the red progress bar at the foot of the video, it's not solid, but divided into tracks;  so if you run your mouse cursor over the red line, it'll show you the title of each track, making it easy to find the one you want.

It's a very long piece of music, over 3 hours in duration.  I can't say I enjoy it for extended periods, because it's all "mood music", designed to trigger an emotional response in those hearing it as a background to playing the game.  Whilst I do enjoy classical music, this musical style seems "choppy" and disjointed compared to a symphony or concerto.  Some people enjoy it as background music while they work on creative projects, such as writing;  but I find this sort of music distracts me more often than it focuses my thoughts.  Everybody's different, I guess!

Nevertheless, the soundtrack has sold many millions of copies, as have the soundtracks to many similar and competing computer games.  That style of music clearly appeals to a great many people, so I thought it was worth introducing it to those of my readers who may not yet have come across it.

Small world as I replay this game for the Nth time :D

The music does make a LOT more sense in the context of playing the game; and to those that have played it.

Interesting to learn how it's put together for sure!

I have an embarrassingly high total number of hours in that game, according to Steam's tracking. Admittedly, I tend to start it on the laptop first thing in the morning or after work and then pause it while working around the house or reading, even leaving the house to go shopping or whatever. With mods (and more being made all the time) to add or change pretty much everything you can imagine, it keeps holding my interest. Not a big surprise then that it's running right now.

Still, when I needed something for when things get noisy outside and it's time to have background music over and above the fan that runs overnight to help with tinnitus and such, the ten hour long Skyrim ambient music track on YouTube was a no brainer. Feels like home at this point.

The comparison I use is with opera - nobody really wants to listen much to the recitative, they're there for the arias. Same with Skyrim - the theme is quite dramatic and gripping, like the theme to Tannhäuser.

So yeah - great stuff with a lot of filler.

Many hundreds of hours of play, almost NO progress along the main story line. I just like fooling around in the game. The games are very deeply conceived with an extensive history and backstory.

Most nights, I turn on the bedroom TV's sleep timer, and start one of the many youtube Skyrim music vids, usually "skyrim sleep music" or the calm nighttime one. Rainy nights music and ambience is nice too, but has too much lightning flash in many places to really fall asleep.

(my wife has played thru all the games, more than once, winning all the quests, rising to the top in every faction, etc. Now she's playing the extended content in Skyrim with our young kids.)

Skyrim is for the Nords!

It's probably also worth mentioning that I listen to music at home mostly on youtube. Their recommendation engine is really good if you feed it properly.

In the comments of many many songs I find people saying they "came here from xxxxxx game, anyone else?" It seems like 'the kids these days' are being introduced to music inside games, and are seeking it out later on youtube and finding some great artists along the way. (most of what I find like this is older music, reinterpreted or remixed for the game, like a lot of stuff by The Postmodern Jukebox, or other 'electro-swing' bands.

There are alot of musicians on youtube with tens of millions of plays that never got a minute of 'traditional' airplay.

The Mrs. has already introduced me to that one . . . at length.

There is quite a lot of effort that goes into video game soundtracks. I sat here and watched my kids play through Portal 1 and 2 and made a couple of observations. The logic and spatial reasoning required are quite high. A couple of songs written by Jonathan Coulton for the ending credits are really funny and now they've been covered by a Big Band group.

I'm not going to try to describe the story line of the Portal series.