The Babylon Bee hits another one out of the park

The satirists at the Babylon Bee are outdoing themselves these days - hence the strident attempts by those with no sense of humor to shut them down, or censor them, or do anything at all to stop them making fun of the perennially anal-retentive.

Remember the NFL's recent sickening politically correct kowtowing to Pride Month?  That's right - the "Football is Gay" video.  Well, the Bee took that ball, ran with it, and spiked it hard in the humor end-zone.

Starting this season, The National Football League will allow refs to throw rainbow-colored flags on the field if they catch any players not being gay enough. 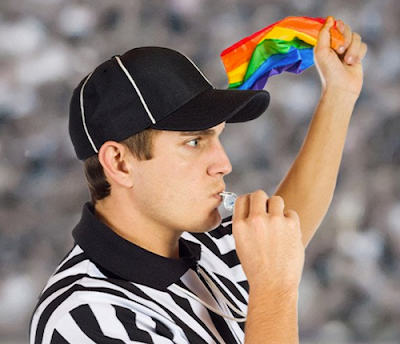 "Listen-- it's 2021. Football is gay. Always has been," said Commissioner Roger Goodell. "Unfortunately, we still have a few players living in the past who need to get with the program. If we catch anyone in our league not being totally gay all the time, you can bet we'll be nipping that in the bud!"

Some of the new penalties being introduced include:

Even gay people are cracking up over that one - particularly the edited photograph.  I found one social media post where an openly gay NFL fan quipped, "Hey - there's a [flag without the L] on that play!"  Not-safe-for-work hilarity ensued (which is why I won't link to the post and its replies, so I don't have to exorcise this computer).

My sincere thanks to the staff of the Babylon Bee for providing so much fun, laughter and debunking of the politically correct.  They're in the finest tradition of satire throughout history, and right up there with the best.  If any of them ever find themselves within striking distance of North Texas, they're welcome to join us at a supper gathering of the North Texas Writers, Shooters and Pilots Association.  The food is good, the company is friendly and the laughter flows freely.  They'll feel right at home.

Guess the Jaguars are going to be screwed this year.

I love the Bee and I especially love it when the woke humorscolds fact check them. Stand by for this to be fact checked.

"The NFL Commissioners office released a statement today that there are, in fact, no plans to introduce a rainbow colored flag or to introduce any new rules regarding the mentioned behaviors. We rate this as False."

Satire can be the most effective form of revealing the depths of foolishness, hypocrisy, and idoiocy. The writers of the Babylon Bee are amazing - although to be fair in today's society, the articles almost seem to write themselves.