I note, with growing anger and irritation, that the authorities in California appear unwilling to do anything to stop the epidemic of shoplifting that's plaguing major cities in that state.

Retail thefts have been troubling major cities in recent months, forcing some stores to close their doors or limit operating hours.

Multiple incidents in California have been captured on camera, including a viral video from earlier this month that shows a group of shoplifters dashing out of a Neiman Marcus department store in San Francisco and jumping into idling getaway cars.

Meanwhile in Los Angeles, another video that began circulating online last week appears to show two men in the suburb of Granda Hills casually leaving a TJ Maxx store with their arms full of items.

Authorities and retail officials in San Francisco have said that packs of shoplifters have regularly made off with merchandise to be resold.

Shoplifters aren't stealing "one or two items that someone might need to get by," San Francisco Police Department spokesman Robert Rueca told Fox News last week. "Our investigations have shown that there are organized fences where people are selling these products that they steal."

Millions of dollars’ worth of merchandise has been stolen from retailers in San Francisco, California Retail Association President Rachel Michelin told Fox News, adding that the funds from stolen items are ultimately used by crime syndicates.

It seems that District Attorneys in that state - backed up by ultra-liberal town and city councils - have decided not to prosecute thefts involving a value of less than $950 or thereabouts.  The result, inevitably, has been an explosion of such thefts.

During the rioting and looting last year, this meme was doing the rounds: 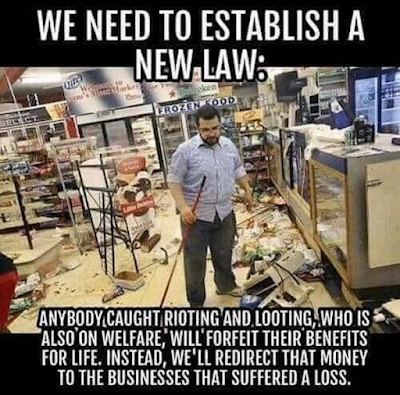 I think it's high time California passed a similar law directed against shoplifters.  If they're on any sort of government benefit, state or federal, at the time of their offense, then after conviction they should forfeit any and all rights to such benefits for the rest of their lives.  Instead, that money should go into a fund to reimburse the victims of their crimes.

Another thing.  District Attorneys and prosecutors who refuse to indict the criminals involved should immediately forfeit their jobs, be disbarred from legal work, and be banned from holding any public office, elected or appointed, for the rest of their lives.

Do those two things, and I reckon the epidemic of shoplifting in California would vanish almost overnight.

They are all on the Alinski/Illuminati program to crash the system into chaos. From chaos, they build their utopia, minus the useless eaters. They have informed us of this coming change for decades, probably longer.

It's a good meme; but since they aren't prosecuting, no one will suffer the consequences.
If those businesses would close, maybe enough people would stop voting for liberals.

I'm beginning to think that the drought they're experiencing might be divine judgment.

What happened to "Looters will be shot"?

That would clear up a lot of problems.

LindaG: Those businesses are closing. The next step is to then proclaim the area a "fill in a commodity" desert and use that to prove that America is racist. There will be then be government run shops and more assistance to the "underclass". The goal is socialism and the leaders, who don't suffer from the deprivations they cause, don't care about those businesses or the people who shop at them, except as a means.

TSquared: The problem here isn't looters, it's shoplifters. I doubt any store owner will get any sympathy from the general public or a jury for shooting someone shoplifting a few hundred bucks worth of stuff. I believe it is one reason those in charge are doing it. They can destroy the middle class, create an argument for more government intervention in the market, and there is little to no danger of an news story unsympathetic to the perpetrators showing someone attempting to protect their business as it is burned to the ground.

Here in Washington they just changed the rules regarding what the police are allowed to do when a crime is committed. The new rules do not allow the police to detain someone for "reasonable suspicion". If I am robbed and I call the cops to report a man wearing a bunny suit has stolen my TV, and on the way to interview me they see a man running down the street in a bunny suit carrying a TV, they basically can't detain him because they haven't actually interviewed me yet to determine what actually happened.

Partly because of this type of BS I am running for city council in my small town this year, getting involved in politics for the first time in my life, because I don't want to see this crap coming to where I live. Small stuff but at least something. Get involved. And prepare for the worst.

Honestly, not much can be done until things become very bad. Even now, the thefts do not affect the majority of the population and for better or worse, large corporations are often seen as being "deserving" of such treatment.

So the stores will eventually close.

Will the government move in to fill the gaps? That I am less convinced of. To date, the government has not really shown the inclination - and even if government stores are in place, it will not inherently change the underlying behavior. Plus the fact that, having accomplished what it was meant to do - drive out businesses and a bustling middle class - the government will have less concern. History demonstrates that proles are often considered expendable.

Problem lies with the people not voting. Prop 47 in 2014 reclassified the dollar amount and reduced shoplifting/fencing to a misdemeanor. In a state of over 32 million people a little of 4 million caused the problem by voting to change the law. Being a misdemeanor makes it a low priority for assigning police action, prosecutors are overwhelmed trying to make felony cases so they don't bother.

I think if I was a store owner, minimum price on everything would be 1K with a discounted price below that said discount would be taken at the register.

It’s Granada Hills and it’s in the San Fernando Valley and part of LA City. My guess is the thieves are not local.

Due to have a Soros backed District Attorney, alumni of the SF DA office, Gascon, and a city council that defunded the LAPD a bit, I’m avoiding LA right now. I did sign the recall against him.

The problem is a proposition, backed by our current Governor, increased the felony minimum for theft from $500 to $950. And used Covid to empty the jails. And I think Gascon has tried to eliminate bail.

And the various factors are hurting the LA city economy, probably disproportionately Black Males employment. Importing a lot of low skilled workers that compete with them for jobs does not help. And the shutdowns that devastated small businesses. And an increase in crime.

I'm happy the cities that pass these dumb policies are suffering. The people who voted for this deserve no sympathy from anyone.

It's like those idiot females in a city of Minnesota that invited the homeless criminals into their city parks and then wondered why it was unsafe to go out to said parks. You can't fix stupid!!!

I believe in Texas you can still used armed force against a shoplifter or looter.

It's going to have to get a lot worse before it gets better.
Crank up the heat under the frog! Encourage it to jump out of the pot before it gets eaten!

It's no worse than Kim Gardner's office not showing up for court and letting a murderer go free.

And it's the same thing you see even in Red country where a good self-defense shoot occurs yet weeks or months later a prosecutor will file charges and destroy the life of the shooter. Meanwhile the same prosecutor and prosecutor's office plea down or drop charges on actual murderers and other criminals.

In most places, you stand a better chance of going to jail overall for missing paying your traffic ticket than you do for dealing drugs.

All over the nation, the criminal justice system is broken. And it usually starts in the prosecutor/public defender/state attorney's office because they will drop or plea down everything in order to get a plea bargain on the lowest charge so they can call it a 'victory.' Then the leftist progressive judges follow with in-court rulings that drop more charges, invoke less punishment and continue the cycle (good example is how many times does a felon need to violate their probation before, you know, being sent to jail or prison for... violating their probation? One guy I followed had 7 felony cases (not charges, CASES) that he was on probation for simultaneously. The last time he violated the judge dropped the probation on 6 of them and counted time served for the 7th. This was while he was being charged with an 8th felony violation, that the judge and the prosecutor niggled down into a misdemeanor and let him go on his own recognizance. Not kidding. This was common in my area 6 years ago and it's common everywhere.)

The Soros-backed prosecutors are just the most visible part of an extremely broken system.

We don't have time for that.

Businesses are simply shutting don in the hood, and when ghetto-ish folks come in outide that zone, they have a security shadow from arrival to departure.

That, or everything is secured, and you have to ask for what you want from someone behind bullet-proof partitions.

It's already becoming the norm.
Business owners here aren't waiting for the state to wise up.

What Aesop said. My local Walmart in a Red zone and even now has $2 items behind plastic.

Another thing we'll see is simply closing more and more locations and moving to an online only presence.

Th e net result of this won't be some chaos driven reset but an implosion of cities who no longer having retail, office, manufacturing will also hemorrhage people and tax base,

A hundred percent of nothing is well nothing.

Eventually gangs and thugs will handle security and problems will end up vanished.

The easiest and fastest thing for stores to do immediately would be to remodel themselves.

No more self-service, everything's behind the counter, like it was with the old general stores.

They could probably pay for the extra staff that would require with the amount of loss they stop.

And then the city council will outlaw bulletproof glass because it makes the local hoodlums feel like the store owners don't trust them. (Gosh, I wonder why...)

But it's either that or abandon the locations entirely.

Jail for stealing, mandatory sentence of 1 year. Second time, 5 years. Murder ? Rape ? Minimum life in prison. Multiple offenses ? Death penalty.
Oh, wait ! We don't enforce ANY laws unless the accused is a political/thought criminal. Not minorities or liberals. They are excused.
It is all for our goal of Communism In Our Lifetime ! Yay Kamela Harris !