A high-spirited end to the "Whisky War"

It seems Canada and Denmark have ceased their good-natured "hostilities".

The prank war began after the countries convened to settle boundary disputes in the Nares Strait, a channel 35km (22 miles) wide of cold water separating Canada and Greenland, an autonomous territory of Denmark.

In 1973 they struck a deal to create a border through the strait, but while they negotiated, competing claims emerged over the tiny island.

Both Canada and Greenland sit 18km away from Hans Island, allowing them to claim the rock under international law, and in the end they decided to settle the dispute at a later date. 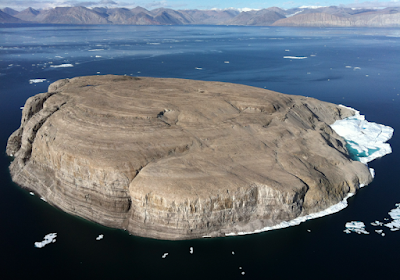 But in 1984, Canada made a bold stake for ownership when it landed troops on the rock.

They swiftly planted their maple leaf flag and buried a bottle of Canadian whisky, before returning home to a country now larger to the tune of almost one square mile.

Denmark's minister of Greenland affairs couldn't let such a provocation stand. Weeks later he set off for Hans Island, where he replaced the offending Canadian symbolism with a Danish flag and a bottle of Copenhagen's finest schnapps.

But he went one step further than the Canadians had, proudly leaving a note that read: "Welcome to Danish Island."

And so the "Whisky Wars" commenced.

Over the following 49 years, dozens of Canadians and Danes took part in the ritual and visitors to the island describe a sea of slightly tattered flags and notices.

Finally, in 2018, the countries decided to establish a joint working group to resolve the dispute, ending their decades-long "agree to disagree" policy.

The deal will be signed once both countries grant parliamentary approval and will see the island split along a naturally occurring cleft on the rocky outcrop, according to a deal published by the Danish foreign ministry on Tuesday.

Once signed off, Canada and Denmark will have established the world's longest maritime border at 3,882km [2,412 miles].

If only other boundary disputes could be settled so easily and so good-naturedly!  Russia and Ukraine could certainly take mutual (and profitable) heed of such arrangements.  Settle the Luhansk and Donetsk dispute with vodka, not dead bodies!

It's easy to have peaceful, jocular solutions when the issue is essentially meaningless.

It was just a media prop, a 'feel-good' story. Joly (Canada's) is a Liberal, from inner-circle of Top Scumbag Trudeau. Yeah that guy, the Prime Minister who toyed with Canadians' freedoms and froze private accounts for those daring to oppose.