There have been several developments concerning COVID-19 vaccines.  To call some of them "horrifying" is a gross understatement.

First, the vaxx and fertility.

Why is there a substantial decrease in births in Germany and Switzerland (and other countries) – nine months after the beginning of covid mass vaccinations?

Do covid vaccines influence male or female fertility? ... new birth data out of Germany and Switzerland raises some serious questions. Specifically, both countries recorded a consistent 10% to 15% decrease (compared to expectations) in monthly births from January to March/April 2022 (the latest available data) – that is, precisely nine months after the beginning of covid mass vaccination in the general population in April/May 2021 (see charts above and below).

How can this substantial decrease be explained? Is it due to behavioral or biological factors?

Furthermore, there have been widespread and officially acknowledged reports of post-vaccination menstrual disorders (over 30,000 reports in Britain alone); official reports of vaccine adverse events including death in breastfeeding babies (over 60 reported cases in Germany alone); a still unexplained, transient increase in neonatal deaths in countries like Scotland; and reports by Austrian midwives of an increase in complications during pregnancy and delivery after covid vaccination. Meanwhile, Pfizer has never even finished its vaccine trial in pregnant women.

A similar decline in births since early 2022 is visible in Britain, the Netherlands, Norway, Slovenia and Taiwan, but apparently not in California (though states that saw an initial lockdown-related decline in births may see a subsequent rebound).

There's more at the link, including further links to the studies cited above.

Some authorities are already trying to decry such "rumors" and "falsehoods".  Unfortunately for them, the trickle of evidence is turning into a tidal wave.  See, for example, this Twitter thread from user Jikkyleaks (original tweet is here), providing yet more links and graphics to illustrate the trend.  A brief excerpt:

This is a massive safety signal for infertility. Germany's FIRST report of birth rates since the rollout.

Remember that the birth rate data is 9 months too late.

If the next quarter is worse, this is Children of Men scenario. 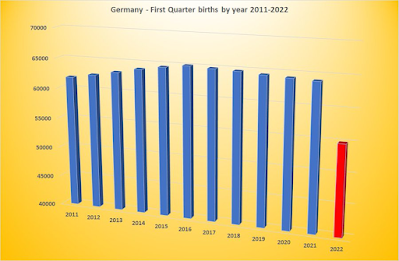 The money people understand this.

Again, more at the link.  Nassim Taleb might call it a "black swan event" rather than a "unicorn event", but the impact of either is no less disastrous.

Another report notes that Taiwan is experiencing an almost 25% drop in births over the same period, and rates this as no less than a 26-sigma event.  The author notes:  "This can be described as “unimaginable” in terms of the likelihood of happening due to random chance."

Next, there's preliminary but growing evidence that mRNA vaccines against COVID-19 may cause Creutzfeldt-Jakob or other prion diseases of the brain in some recipients.

Researchers believe the prion region from the original Wuhan COVID-19 variant’s spike protein was incorporated into mRNA vaccines and adenovirus vector vaccines — given to hundreds of millions of humans — and that it can cause a new type of rapidly progressing sporadic CJD.

A French pre-print paper published in May on CJD and COVID-19 vaccination identified a new form of sporadic CJD that occurred within days of receiving a first or second dose of Pfizer or Moderna COVID-19 vaccines.

The link between CJD and the vaxx was postulated by the late Nobel prize winner, Dr. Luc Montagnier, last year.

We’re in unknown territory and proclaim mandatory vaccines for everyone. It’s insanity. It’s vaccination insanity that I absolutely condemn. I want to say as well, that I never, never said that everyone will die from the vaccine, but that a certain amount of people who take the vaccine will suffer from it. That’s impermissible ... There could side effects that affect future generations as well, maybe, but most probably from our generation in five to ten years. That’s absolutely possible. Notably, something we call neurodegenerative illness. There are sequences that resemble the prion sequences in the RNA of the coronavirus. These prions could disorder the natural proteins in the brain, modifying them to make prions.

Friends, if you took the Pfizer or Moderna mRNA vaccine, all I can say is, get checked out for any or all of the above problems, just in case.  If you're fortunate enough to have missed them (at least so far), all well and good - but how will you know unless you check for yourself?  I can't see the powers that be bothering to tell you about these issues.

I am 100% protected from all of these bad side-effects

Its still too early to say if this is due to the vaccines and if it is a long term trend:

It would be interesting to see if there is an uptick in infant mortality, and/or birth defects too.

Haven't read all the material, but recall the massive uptick in miscarriages as well.

And they're realizing they already got in the barrel and are going over the falls, and now there's nowhere to hide from gravity, working.

Now, think about what happens worldwide when hundreds of millions of people realize they have nothing left to lose, but they know they're permanently hosed, and who did it to them (along with their own sheepish behavior).

Look on the bright side: fewer Leftists having kids.

> Look on the bright side: fewer Leftists having kids.

That's why they steal, corrupt, and rape non-Leftists kids.

So, Kurt9, it is just some weird statistical thing that will just go away, eh? Nothing to see here, just "One of those Things".
Keep thinking that way if it helps you to sleep.

Did you EVEN LOOK at the graphs, and read what these article said????