It's got to the point where politically correct bigots are denying medical facts in their efforts to dominate discourse.

A Norwegian feminist faces up to three years in prison for saying that biological men can’t be lesbians.

Christina Ellingsen, of the global feminist organization Women’s Declaration International (WDI), is under police investigation for making the claim in a tweet in which she criticized the trans activism group FRI.

“Why [does] FRI teach young people that males can be lesbians? Isn’t that conversion therapy?” Ellingsen allegedly tweeted.

She also questioned the legitimacy of FRI’s advisor Christine Jentoft identifying as a lesbian despite being born a biological male.

“Jentoft, who is male and an advisor in FRI, presents himself as a lesbian – that’s how bonkers the organization which supposedly works to protect young lesbians’ interests is. How does it help young lesbians when males claim to be lesbian, too?” Ellingsen reportedly said.

“You are a man. You cannot be a mother,” Ellingsen allegedly told Jentoft. “To normalize the idea that men can be mothers is a defined form of discrimination against women.”

“Amnesty International is also accusing Ellingsen of harassment for saying that Jentoft is a man on national television,” reports Reclaim the Net.

Norway’s hate crime laws were made more draconian last year to make criticizing gender ideology a crime and Ellingsen faces up to three years in prison if she is convicted.

The fact that Ms. Ellingsen is manifestly (oops - should that be "womanifestly"?) correct in what she says is being completely disregarded, by the law, by the authorities, and presumably by the courts as well.  Like it or not, men - those with an XY chromosome - are not women, and cannot be a mother (in the sense of giving birth).  Only those with an XX chromosome - actual women, in the medical sense - can do that.  To say otherwise is ludicrous, nonsensical, deluded and deranged.  The same goes for being a lesbian.  The word is clearly defined and has a specific meaning - and it cannot be logically or rationally applied to men, no matter how the "woke" may try to insist on it.

I could pass a law tomorrow saying that the sky is red, and imposing criminal sanctions and punishments for denying that.  It wouldn't alter the fact that the sky will remain stubbornly blue, and anyone saying otherwise will be identifying themselves as nuts.  If Norwegian law is attempting to subject "gender ideology" to the same idiocy, then Norwegian law is an ass, and should be condemned for the nonsense it is.

I can't help smiling as I recall this well-known exchange on Twitter. 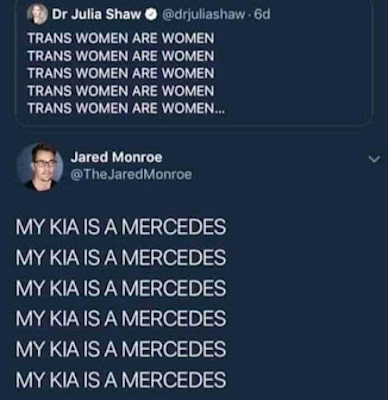 Same logic, same error, same fallacy - but the bottom one is a lot funnier than the top.  If I were Ms. Ellingsen, I'd display that tweet in court in my own defense.  It would make as much sense as the prosecution's charges!

I wrote this before, for a previous entry regarding this subject with respect to gender identity on this blog, but I got no response, so I write it again:

I respectfully suggest the watching of the Frontline Program, "Growing Up Trans". from Season 2015, Episode 11.
[Although 1 hour 24 minutes long, . . . try at the very least watch the first 30 minutes].

Then tell me if you believe what you wrote, or if it changed in anyway. Thank you.

Chromosomes do not define sex. There are women with "Y" chromosomes. There are men with two "X" chromosomes and a "Y". There are also other chromosomal combinations outside the norm.
Sexual organs do not define sex.If something goes wrong during pregnancy people can be born with the opposite sex's sexual organ. Or even none at all on the outside of their bodies.
No, what defines your sex is what gamete you produce: Sperm or egg. There is no third sex : no sperm, + egg + ? to make a human baby. Nope, always it's just Sperm + Egg = Human baby. This, along with the fact that NONE of them has ever been shown to be able of self-fertilization (let alone self-fertilization to create another of their 'kind') is why "Hermophrodites" or the "Asexual" are not a 'third sex'. It's also why men can't become women or vice-versa, no matter how much surgery is done or how many chemicals are taken or suppressed.

It's too bad the right forgets things like this and makes arguments that the left can easily destroy in their quest to convince everyone of their current sex change craziness.

I'm so old, I can remember when calling oneself a male lesbian was obviously a joke.

Clarence your comment is trying to make the very small fraction of genetic error folks into something much larger than they are. Far less X,Y gene errors than 1% of population as a whole.

Egg or sperm is correct, but logic isn't MY FEEELINGS as most Leftist arguments run.

A doubleminded man is unstable in all his ways. James 1:8

You cannot argue logic nor science as they will argue until your exhausted.

Fools have a fixed mindset
They always bring up stupid logic to support their theory
Despite what you mention or say, they will always try to bring you down to their playing field
They believe their ways to be correct, and they are the only ways that will work for anyone
They are never open to new ideas
They will go to any level to prove their point

1.“Never argue with an idiot they’ll drag you down to their level and beat you through experience.” – Mark Twain

Other than determining if they are a threat to me and mine, it's God's job to resolve their confusions.

Have you followed the Canadian who goes by the moniker Billboard Chris?
Please see his website for useful resources & data.

This will lead to the death of the cat if taken to its logical outcome - similar outcome for the kids.

Yeah, to hell with her. You lie with the Marxist dogs, you get fleas.

pjk: "A transgender child is like a vegan cat - you know who's really making the decisions."