A few reflections on the worldwide food crisis

We've spoken often in these pages about the current food crisis, threatening real famine in many parts of the world, and certainly affecting the USA as well.  Recent articles here include:

This post will build on that foundation, highlighting a few recent articles on the subject. 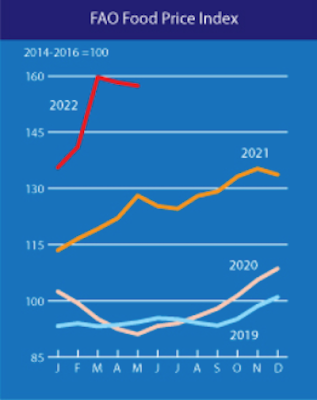 Read it left to right for each year, then jump upward to the following year.  The start point for each year is approximately the end point for the previous year.  Notice a trend?  It's a grim tale of constantly increasing prices, rising sharply this year to a new peak.  The slight easing over the past couple of months is merely the calm before the storm as grain shortages caused by the Russia-Ukraine war begin to bite harder, as they will when this year's harvest (which was not planted in large areas thanks to the war) can't be gathered.  We've seen the same price pain play out on our own supermarket shelves.

Governor Kristi Noem of South Dakota reminds us that "Food security is national security".  From that perspective, she's worried about the amazingly frequent fires and other disasters affecting US food producers over the past year.

Food production facility fires are ... enormously disruptive events. A 2019 fire at the nation’s second-largest beef packing plant in Holcomb, Kansas shuttered the facility for four months; at that time, the plant was responsible for six percent of total daily beef slaughter. Whether 2022’s incidents are anomalous or the result of something more sinister, the point is we need more information.

Mainstream media outlets are busy attempting to lampoon anyone who expresses even the remotest concern about incidents at food processing facilities today. The repeated refrain is ‘there’s no evidence of any wrongdoing, so drop it.’ But absence of evidence is not evidence of absence.

Coming at a time of shortages in such everyday essentials as fuel, semiconductors, and even baby formula, the American people have every right to be skeptical and to demand answers about the incidents shutting down food facilities. Americans deserve to have their leaders treat disruptions in our food system – from foreign interference to fires to shortages – with concern.

Kit Knightly, whom we've met in these pages before, says the food crisis is intended to benefit the powers that be.  He writes about "The REAL agenda behind the created food crisis".

Just as we saw lockdowns break the economy to pieces whilst the billionaire class land record profits whilst corporate megaliths expanded their monopolies, so too will any proposed food security policies end up benefiting the already mega-rich or installing infrastructure for corporate control.

They just announced the building of the largest “cultured meat factory” in the world. Fake meat, of course, can’t be raised at home and is subject to patented processes of creation. Genetically edited or modified plants and animals are likewise subject to patents.

Supranational companies, with profits larger than the budget of some nations, are developing carbon footprint tracker apps which reward people for making the “right decisions”. That could easily be applied to food.

Bill Gates has quietly become the largest owner of agricultural land in the United States. Land on which he can grow new Frankencrops, or which the US government will pay him not to use.

The play is clear: Right now they’re getting ready to tear all our old food systems down, with the stated aim of building them back better.

But better for them, not us.

Screenshot this page. As famines spread, we will begin to see reports of pandemic.

Potential accelerant: There is a low rumble among the credible-class — a class who emerged during this ‘pandemic’ — that these experimental drugs, mislabeled “vaccines” may be causing severely weakened immune systems. In other words, many jab-victims appear to be suffering from an Acquired Immune Deficiency Disorder.

No person — including Donald Trump — who rushed these experimental drugs into veins across the world, is among the credible class.

A little voice in the back of my mind whispers “don’t call these chemicals experimental drugs. There is no public evidence to indicate these were rushed — other than the mass production.”

Food is, of course, distributed through local, regional, national and international supply chains, all of which are profoundly affected right now by overloads and undersupply.  FreightWaves claims that "Supply chains are never returning to normal".

Buffer stocks of products are far less likely in the future, as the cost of producing those items continues to rise. Cheap labor, offered by large populations of young people, is largely a thing of the past. This will make it more expensive for companies to produce buffer stock and far less likely that supply chains will enjoy the ability to absorb short-term shocks that are inherent to complex global networks.

More at the link.  The implications for the security and stability of our food supply are obvious.  An IBM executive recently commented that "Every day in the supply chain has a black swan" - something that one couldn't imagine happening, but it happens.  FreightWaves' CEO predicted a couple of months ago that he believed a freight recession is imminent.  Events on the ground seem to be supporting his position.

Finally, "Mish" Shedlock, a noted economic commentator, warns bluntly:  "Expect a Deep Recession to Start This Quarter or Early Third Quarter".  This is corroborated by other economic data, including FreightWaves' warning that "US import demand is dropping off a cliff".  Again, if our economy goes down the tubes, food supplies and their distribution are likely to go with it.

I said some weeks ago that, looking at the signs of the times and events all around us, I believe that we're facing "A totalitarian onslaught against freedom on a worldwide scale".  I've seen nothing since then to make me change my mind - only support my conclusions.  I regard the food crisis as just one element of that onslaught.  If you haven't already done so, I recommend you read my earlier article, and decide for yourself on the basis of the available evidence - then prepare accordingly.

Noah didn't wait until the rain began to fall to start building the Ark. It may not be too late to prepare for the coming apocalypse but it sure will cost you more to do so. Soon it may be too late. The rain has started to fall and the storm will intensify.

We are not waiting for a coming collapse, it has already begun. We are in the midst of a free fall right now without a parachute and can only hope we can brace for impact and survive. This is a manufactured crisis and those who are behind it have plans to profit from it no matter the cost to the majority of the population.

The reality is that those who think they are in charge have lost control and will suffer the consequences especially when all those folks stuck in their normalcy bias get a rude awakening by the coming sudden impact. No one will be spared.


Of course before they are forced to admit that they have lost control they will resort to the "big distraction", war. And in this case it will take a world wide war because the collapse we are seeing is global in nature. Nothing can be done to stop the free fall we are in. Here we continue to plant and I have tilled up new areas one of which we planted 10 pounds of sunchoke tubers for future use if needed. They can be quite invasive but all the better if we need to utilize them for food at some point. They are planted down by the pond in an area where they can spread to their hearts content. On top of that we placed another large seed order which will be vacuum sealed and stored away.

What I would very much like to see is an explicit legislative ban on patents for gene sequences.

I've wanted this since... gosh... when was it that some doctor patented part of one of his male breast cancer (I think) patient's gene sequences. And then the man sued the doctor for making money off his genes and lost. 20 years ago now?

Allowing someone to patent a gene sequence is slow-motion slavery, claiming ownership of a person, in whole or in part. So, just in case that plant or animal gene you patented shows up in a person, you have to ban the patenting of any genetic sequence to avoid accidentally enslaving someone.

The only viable solution, if you can call it that, would seem to be to retreat to the countryside and work to reclaim the self-reliant independent lifestyle of my great-grandparents. And make your locale a "no-go zone" for the authorities.

The theme of this disaster is that it is wide and deep and will last for decades, if not longer. No normal person will be able to store enough food to ride this out. Nobody is coming to save us. Nobody seems capable of putting an end to it, and the people who claim to be our betters and rulers seem intent on making it worse, as soon as they insure that we can't replace them using socially acceptable methods like voting.

TINVOWOOT and make the bastards bleed.
Good luck everyone.

"A little voice in the back of my mind whispers “don’t call these chemicals experimental drugs. There is no public evidence to indicate these were rushed — other than the mass production.” "

Fouci attempted to patent the vaxx back in 2006. The patent office refused, since it didn't have any of the characteristics that define a vaccine. btw, his patents on the wuflu started in 1998, IIRC. He has at least 160 patents on it.

Mandate that food be used as a substitute for the stuff stored below ground.
Which is also used to produce fertilizer.
And steel.
What a cunning plan.
Picture of bald man stroking a white Persian.
?
Cat! You pervert.